Just what makes this Mario Kart game so deluxe?

With the Switch launch in the rearview mirror, it’s time to look ahead at the next big Nintendo game on the horizon: Mario Kart 8 Deluxe. Due out on April 28, this Switch iteration of Nintendo’s best-selling Wii U game brings with it all the base content and DLC from Mario Kart 8 as well as some new tweaks and additions. All in all, Deluxe promises to be a tremendous package for those who never played it before. As for people who played a lot of Mario Kart 8, or, I don’t know, reviewed Mario Kart 8, gave it a 7.5 out of 10, and then was told, in so few words by way too many people, to take a short walk off a long cliff, your mileage might vary. From what I saw at a recent demo at PAX East, though, I’m far more optimistic about the potential of Deluxe as a Mario Kart game and an essential multiplayer game early in the life of the Switch. 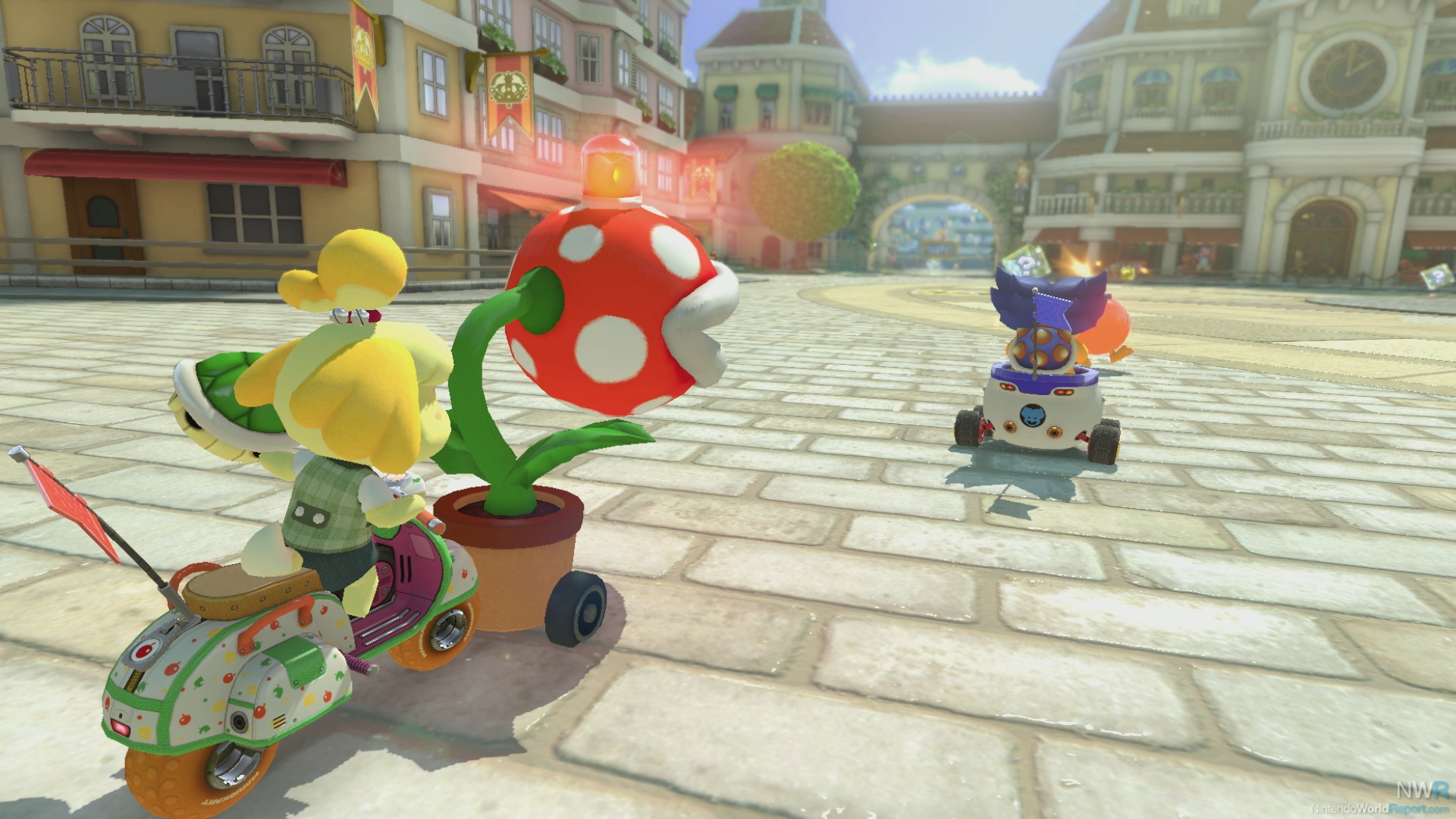 First off, one of my knocks against Mario Kart 8 was that its big new series addition was great graphics and video clips. When playing the DLC, with its inspired Zelda, F-Zero, Excitebike, and Animal Crossing tracks, I remember thinking this kind of track experimentation was an element I wish was more prevalent. The basic racing component is relatively unchanged from the Wii U game, but it includes all of the DLC right off the bat, which means you have 48 tracks to race - all filled with a ton of variety, shortcuts, and challenge. Racing has a lot of other tweaks, too. Smart steering can be toggled on and off so novice Kart players can have an easier time staying on the track (especially helpful for 200CC). Additionally, an extra level of mini-turboing was added. A few more characters are hopping into karts as well, making this a gargantuan cast. The newcomers are King Boo, Bowser Jr., Dry Bones, and a pair of Inkling kids.

But the inclusion of the DLC and some new characters is peanuts compared to the biggest addition to Deluxe: a non-terrible Battle Mode. Gone are the weird, too-large circuits of Mario Kart 8’s miserable mode. Instead, we’re back to the stylings of Mario Kart 7, with timed matches in arenas specifically designed for maximum warfare. Personally, I’m a bigger fan of the older “last one standing” rules, but timed matches have their benefits. First, you can’t win just by camping out, and second, everyone’s always playing. That second point is prudent since 12 players can compete at once here.

Battle features five different modes, most originating in past games. Balloon Battle is the tried-and-true staple, Bob-omb Blast is the nonsense bomb-throwing iteration, Coin Runners is the money-hungry Mario Kart Wii creation, and Shine Thief is all about holding that Shine Sprite for as long as possible. The new mode is Renegade Roundup, a super novel cops-and-robbers-style mode where one team is on the run and the other are Piranha Plant-wielding cops trying to catch them. It’s a frantic mode that is not as intuitive to jump into as I’d like, but once it clicked, the battles were exhilarating and fun. As a cop, you have to hunt down the other players. When they’re caught, they land in jail. Jails are all over the map, and each one has a button underneath it where the renegades can free their own. As a renegade, you need to keep moving while dodging the cops and trying to free your compatriots. If you play this with people who understand it, it might be the best battle mode Mario Kart has ever had. I just worry it might not be something people jive with quickly.

Outside of the Battle mode, Mario Kart 8 Deluxe might have another ace in the hole to make it far improved on Switch: ease of multiplayer. Through local wireless or LAN, you can have up to 12 players playing at once across anywhere from six to 12 Switch systems (up to two players can be on each system in these modes). During my demo, we played via LAN across four systems. It worked fantastically. The ease of connecting might make Mario Kart 8 Deluxe a multiplayer staple at PAX events and all sorts of other gatherings.

I didn’t hear anything more detailed about Mario Kart 8 Deluxe’s online play, but it looks like it’ll be similar to the Wii U dynamic. At launch at least, it won’t be compatible with the voice chat app (that seems to be tied to Splatoon 2, which is due out in the summer), so you’ll be reduced to just telling people you’re using tilt controls using the limited text options. 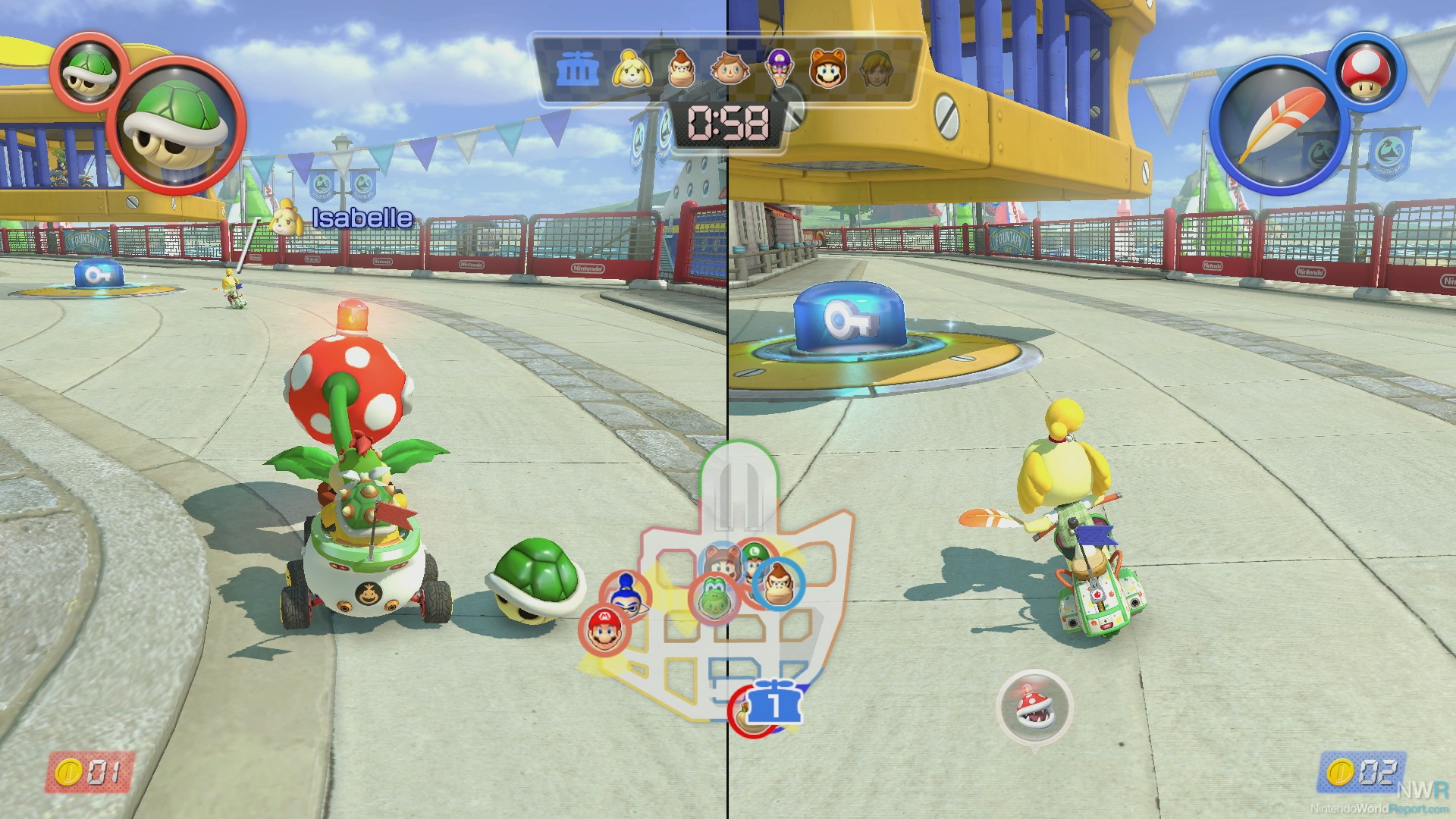 Related to tilt controls, I got a chance to use the Joy-Con Wheel accessory. I have a suspicion I might prefer to use the wheel for Joy-Con separately (as opposed to the straps that comes with the controllers and the system), as it’s easy to snap the controller in and you have comfortable, easy access to the shoulder buttons. Because of the layout of the Joy-Con, you don’t have to use motion controls with the wheel, which is nice. Pro Controllers will probably be the preference for many, but Joy-Con in the Grip or Joy-Con on their sides have everything you need to comfortably play Mario Kart. I could very much see myself using the Wheel for Mario Kart 8 Deluxe and other games, as weird as it might look playing a platformer in a controller with a steering wheel around it.

Outside of any bombshells Nintendo is planning on dropping in the next month, that’s Mario Kart 8 Deluxe in a nutshell. It might not be overflowing with new content, but the potential for being a supreme multiplayer game for the Switch is there. I’m sincerely looking forward to the April release. At the very least, I can race with Dry Bones on the Splatoon map in a rousing game of Renegade Roundup. That’s something I couldn’t do on Wii U.

$60 for this is a very tough sell. Nothing I'm reading from these previews is really selling me on this game, either.

It'll be $48 approx. for us due to the Best Buy Gamers Club Unlocked. Regardless, the enhanced Battle Mode, interesting looking arenas, new characters, double items, and such looks like a nice upgrade for us to jump to the Switch version.

I don't think I saw anything about the new item system. I'm curious, how does that work out? Does it change anything / make things better?

Bring back the Bowser shell.

After buying this for Wii U and paying for all the DLC....think I need to wait on a price cut for this one.  I'd maybe buy-in if I can get it for $30.  I suspect I'll either be waiting quite a while or until Nintendo releases a MarioKart 9 for that to happen, unless retailers try to get rid of excess stock down the line...

Is fire hopping still a thing, and does the pro controller allow for tilt controls?

I bought the Wii U version and all of its DLC. I'm still picking this up!

This and Lego City Undercover will be my two double dippers I have debated over. Lego is confirmed due to the co-op addition. MK is a tougher sell, though I really want it. I really want the Battle Mode and LAN options.


In the end I'll probably gift/sell them to a friend who is going to get a Wii U soon. That would also help subsidize the costs of double-dipping.

Bowser looks evil in that crown.

It'd be a big ask from Nintendo, but it'd be nice if they cut My Nintendo members who bought the DLC a bit of a price drop on the digital version of DX...

Will there be download play available so that we don't have to purchase multiple copies of the game for local multiplayer?

That would be a nice addition. Make it where you can only use shyguys and one or two tracks in download-play matches.

Will there be download play available so that we don't have to purchase multiple copies of the game for local multiplayer?

I feel like if this were a feature, they would have announced it already. It would be a pretty big deal and would make the value proposition a lot more appealing for people who are on the fence about double dipping (at least if they're in a position to take advantage of local multiplayer).

Then again, Nintendo's has seemed to defy logic with a lot of their Switch marketing so maybe it'll be a throwaway line in an upcoming press release.