We may have the first good Mario Party game in a while.

About a month and a half ago, I wrote up impressions of an early version of Mario Party: Star Rush. While I wasn't sure how things would turn out, I was left more intrigued by the potential of the Toad Scramble mode. It seemed like a fun party game for the Nintendo 3DS and a step in the right direction for the franchise. At Gamescom 2016, I learned how the mode actually operates. In three lengthy sessions, it became clear what the developers are shooting for. The end result is that I walked away pleasantly surprised. 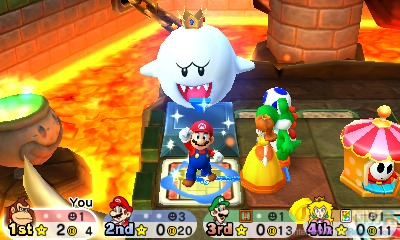 The car is dead, long live the car. After Mario Party 10, I felt sort of done with the series as a whole. I was especially annoyed that it didn't bring any new challenges or surprises to the table. Now with Mario Party Star Rush, it seems like the makers stepped back and looked at what could make the game fun again. Their answer is the Toad Scramble mode, which is the main game mode in this entry. The immediate standout is that although the main goal is still getting stars, coins are important and you can still really screw with other players. Although this may seem reminiscent of the older games, they do try to throw in new things into the mix.

Not all of the changes hit though. I was disappointed in the change to grid based movement instead of the fixed routes and attractions of the older titles. That being said, there are advantages. The new open system allows for movement in any direction you want, go to any space you like and form your own routes to the stars. As I toyed around with Toad Scramble, I started to enjoy and get that concept. It helps that you all roll at the exact same time, which makes speedier games possible.

Another difference is that there are multiple worlds to choose from. From what I have seen, there seems to be room for five or six worlds with three levels each. The three levels represent the size of a board. The first will feature a smaller environment with just three bosses, while the biggest ones will have five bosses to deal with. Yes, the boss minigames are back and it is here where the stars need to be rescued. At least one player actually has to hit the spot before a battle can begin. The others, may they close or far off, need to keep tapping the A-button to close in and join the fray. 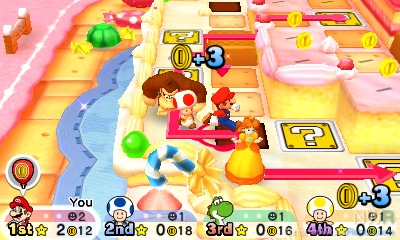 Just like Mario Party 9 and 10, there didn't seem to be a lot of boss battles. I would have to guess around ten, because I did see a few repeats. Luckily, the boss fights that I saw were all high quality. One of them saw you face off against Kamek and try to blast him with a catapult. The boss fight involves playing a memory game to get cards, which pull the catapult farther back to do even more damage to Kamek. Another example involves carrying lights across moving terrain and flashing them right into King Boo's face. By far my favorite was the bout with a gigantic Blooper as it involved a rhythm based game. By hitting a ball on the beat and bouncing it to the next character, the points rack up.

Although boss battles can be done solo, it’s always better to have help. This is where the Ally characters come into play. Various characters from the Super Mario universe will hang around various spots across the board and it is your job to recruit them for your cause. Although some allies may require trips off the beaten path, they can be a gamechanger. Not only do they help you to score points in boss battles, but each ally has a special ability that can be super useful when rolling the dice. If you make Walugi the team captain for example, four sides of the dice will have higher rolls than normally possible... but the other two will cause a loss of coins. Peach’s ability is another possibly exploitable one, as she powers up two sides of the die depending on how many people are in the active party. The other party members also roll as well, which allows for fast movement, but also could lead to over-shooting an objective.

While beating down bosses and collecting allies is important, winning remains the most important thing. The destruction of bosses earns you one star (two for the final boss), but coins play a more important role. Every ten coins at the end of the game will be converted into stars and that makes fighting until the end crucial. Everything in the game earns additional money. From picking them on the field to scoring victories in the Free-For-All minigames which are activated by smashing a Coin Balloon. Next to that, there are dedicated places to get money the opponents will not be able to pick up. This all comes together in the endgame where bonus rewards are given for performing in certain ways, like being the person who travelled the most spaces. After this, the winner will be crowned and the final stats are given. 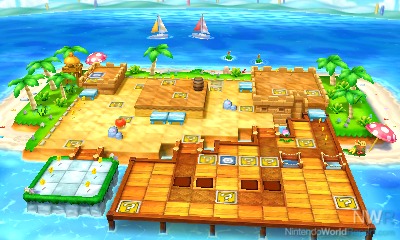 Next to your main goals on the board, there are variables that makes every board different. One of the Ghost House boards puts a lot of emphasis on spikes. The location of these could be swapped by hitting special buttons that are littered all around. If one player is about to reach a boss battle, another can hit a button to block the path. This not only frustrates them beyond belief, it also gives the other players a shot at the boss. One of the boards in the first grassy world puts a lot of emphasis on items, which make a huge comeback in this Mario Party. Every player can carry two, and there are quite a few different ones. To annoy my opponent, I would always treat them to a Poison Mushroom, which lowers the possible dice values. Another thing to do is to land on the same space as an opponent, whether through items or a Lakitu space. This starts a battle where a feat needs to performed quickly, like pressing the A-button on the correct time. The winner gets to take one of the loser’s allies, which will probably end a few friendships.

After seeing Toad Scramble in motion, everything resonated so much better with me. While I don't like the grid based designs, they open up the floor for more heated competition. There was an actual tug of war taking place and players were actually trying to perform. It was weird for me to be so excited about a Mario Party again, but it just happened without thinking about it. The flow of the matches was nice and depending on the board, you knew exactly what you were getting. While I am not sure about the entirety of the game, this is a promising start. This could be the next party I’d be interested in attending! 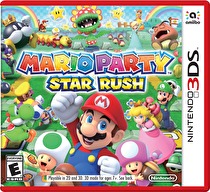