More like Ultra Crash, Burn and Smash the game into orbit.

I love the Mario sports games. They have flair, a wide variety of modes and tons of fan service that makes them really stand out. Vivid memories of Mario Golf: World Tour are still burned into my memory as it is one of my favorite Nintendo 3DS games to date. This is why, somewhere, I was excited to give Mario Tennis: Ultra Smash a go. I wanted the game to be a good for those short playing sessions and get deep into the modes it had on offer. Quickly after booting the game though, I just felt an immense amount of sadness. I am here to tell the tale about why Mario Tennis: Ultra Smash is not a good game.

After booting up the game from the Wii U Menu, the splash screen is just a wall of white with the game's logo. After listening to some tennis court noises, the game appears to me in all of its glory. Well, it doesn't have an intro video and you will be just looking at a simple title screen. The immediate loss of charm was an unexpected one, but it hurts nonetheless. Even if it wasn't on the same wavelength as the GameCube, intro videos were always there to get you pumped. There is something to be said about jumping into the game quickly, but this isn't exactly the right way to do it.

At the end of the day, this can still be easily overlooked, so I decided to shrug it off and hop in. The array of options in the main menu are truly what gave a shock to the senses. The main menu are six panels with options and they aren't split in some clever menus or anything like it. The big mode that they are promoting here are the Mega Battles. These are the matches that I played during E3 and Gamescom. It follows the same gameplay set-up as Mario Tennis Open with the added bonus of Mega Mushrooms being thrown on the court. When touched by a character, he/she will grow to gigantic proportions for a limited time. It will make balls easier to hit and attacks will charge way faster than without them.

The problem is that they aren't a fantastic addition to the gameplay. It just forces the other player to defend a bit harder and wait until his chance comes. This situation feels more annoying in doubles as the players without the Mega Mushrooms feel a bit useless throughout. For what makes these mushrooms actually appear, I am not quite sure to be frank with you. The time between items seems to depend on the way the match is progressing. Regardless of that though, both sides will get one eventually, so learning the algorithms is ultimately pointless.

Other ''improvements'' aren't exactly mind-blowing either. When your opponent does a weak shot, you can perform an Ultra Smash if you are quick enough. It will blast the ball at an extremely high speed and that is certainly harder to react to. The whole idea is interesting, but that almighty Ultra Smash shot is no guarantee to win points. It would make the player learn more from their mistakes if that was possible and ensure that they would charge many of their shots. Now it feels sort of there and another addition to the charge shots system introduced in Mario Tennis Open. Talking about those charge shots, there is less of indicator if you are doing them correctly. The Nintendo 3DS version would make the circle around you glow for that critical feedback, but you don't really see that in the Wii U game. 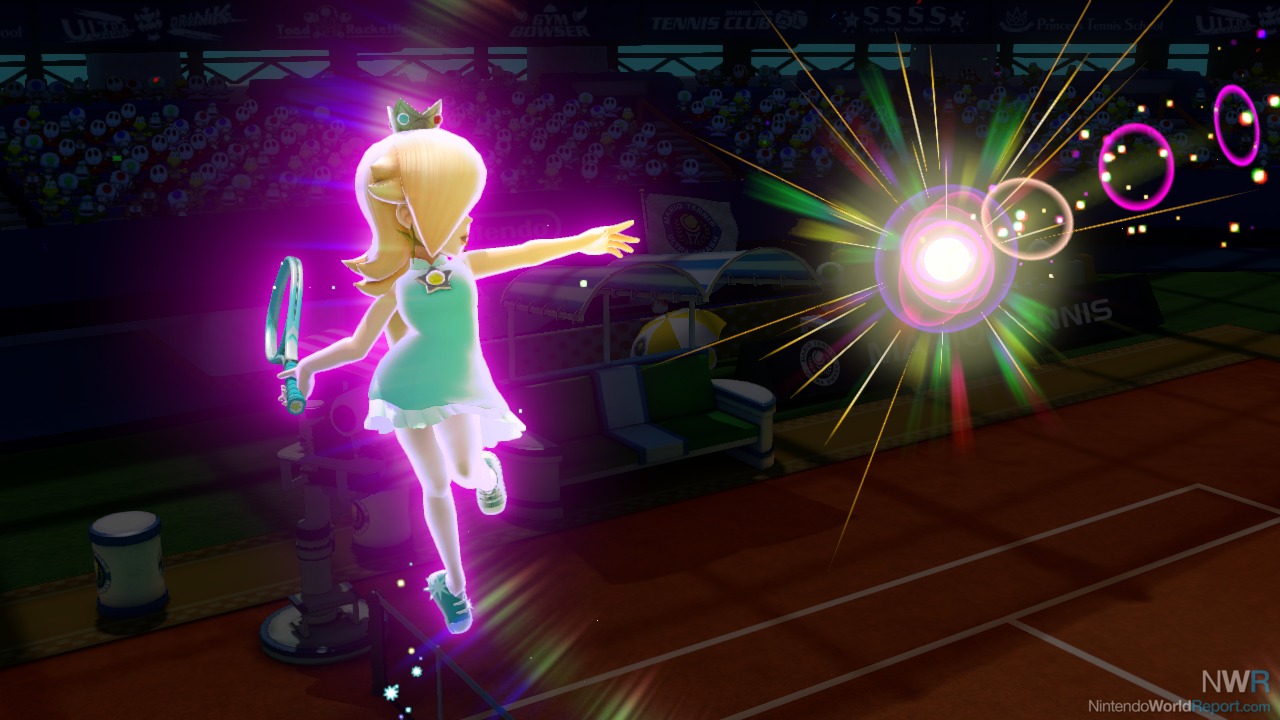 This makes the regular tennis portion of it less fun as well. Mario Tennis: Ultra Smash is absolutely playable and can be decent in passing, but the whole system feels like a game that doesn’t even match Mario Tennis Open’s features. Regular tennis allows for the discussed system in Standard, but Simple makes it barebones with only the Y-button charge shots. It leaves the rest up to the player and lets them freely use any of the moves. Surprisingly enough, I found that the best way to play the game, though the game has clearly no intention of putting it on the forefront.

What isn't exactly forward thinking is the roster of characters, as it feels uninspired and it doesn't really feature any major newcomers. Mario, Luigi and the standard crew are there, which is honestly not a surprise. The only characters I enjoyed playing as are Rosalina and Bowser Jr. The former floats in the air very elegantly and uses her magic to let the ball float before throwing it up. There are some cool touches with Bowser Jr. too, as he is actually in the clown car and the robot arms are doing all the work for him. The more controversial thing is that there is just one stadium with nine different courts. While this one stadium is nicely detailed, it drains the energy out of you so quickly that I couldn't care less about what I was doing. There are some interesting courts there like Mushroom, Carpet and Ice, but ultimately just all felt sort of there.

The same can be said for the one sole minigame on offer, which is Mega Ball Rally. The goal is to just keep hitting a ball back and forth and reach the highest score possible while doing so. It is possible to play it alone or with friends, but after a few times you do get sort of sick of it. Talking about playing with others, the positive thing is that four people can play together in the same room with Wii Remote sideways, Wii U Pro Controllers, Wii Classic Controllers and the Wii U GamePad. I had friends playing it for a bit, but even they wanted to move the game after a match or four. 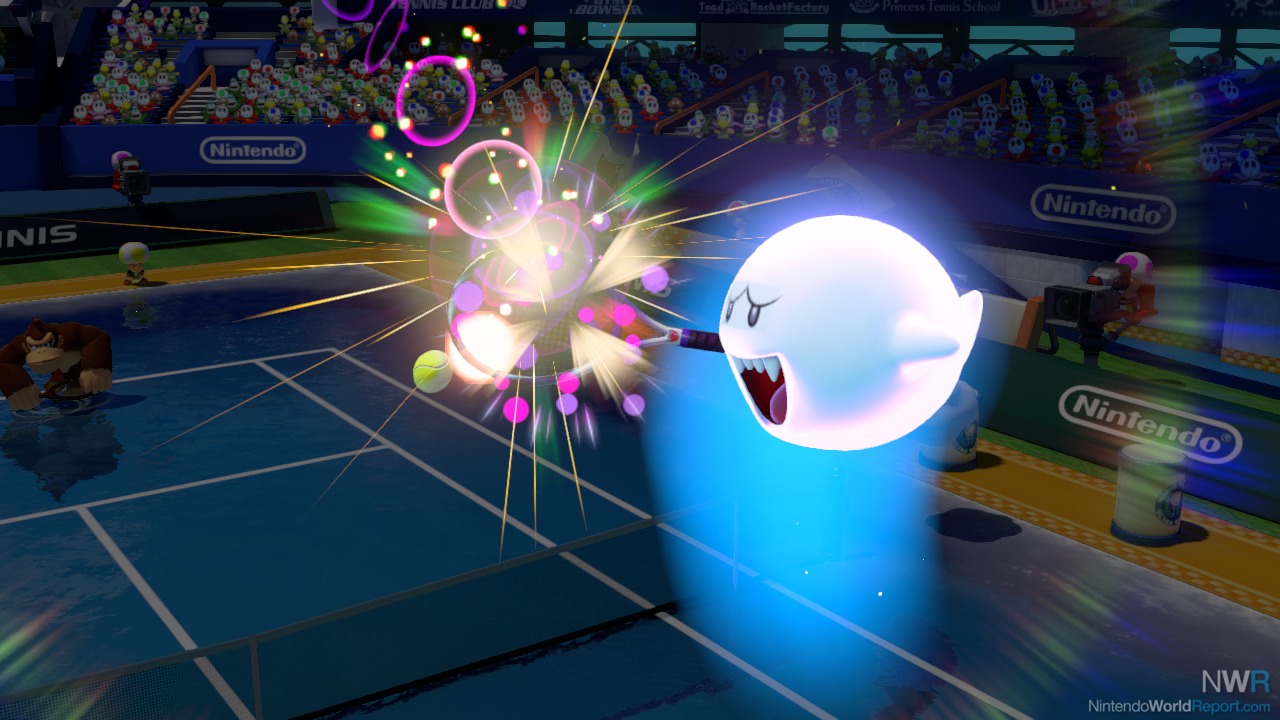 That is fine, I thought to myself. There are always the online options that Mario Tennis: Ultra Smash offers. The moment I opened up that online tab, my jaw dropped to the floor. The game has no support for lobbies or communities, which pretty much means that you can't play with friends. The only options on entering are Singles and Doubles. By selecting one of these, there are some limited stuff available before entering a match. There are Relaxed and Serious options, with the latter allowing you to play some ranked battles and grow your standing in the world. You are free to choose any of the standard modes, but unlike local multiplayer, you don't have any control about the length of the match. You can choose for a tiebreaker or a two-game, one-set match. In Doubles, you can play together with a local friend or an Amiibo of your choosing, but that is only freedom you are going to get.

Your Amiibo character helps you battle online or in the single-player mode called Knockout Challenge. Knockout Challenge is a long string of random computer opponents, which will become increasingly harder over time. With every battle you complete you will get coins and these coins can be spent on buying out of the unlockables. Every one of the 25 unlockables, which are mostly star characters and courses, tells you the way to unlock it naturally through the game. But thanks to playing the mode twice, I unlocked 23 of them already crazy fast. Now that I have played it that much, I don't want to play it ever again. The matches are all Mega Battles and tiebreakers, with the first 15 matches all being on the most basic courts. The random CPUs are chosen in the worst way possible. At one point, I had three Toads in a row and the energy felt zapped out of my body at that point.

The Amiibo doesn't really seem to change all that much though. From the very start, the character already helps you out and makes your life so much easier. After every five matches, he/she will get a single stat boost and the Amiibo can get ten in total. These stats are chosen at random, so no skills of your own actually influences your character. You can change them up in your favour by going to the Amiibo training menu and pay 5000 coins to change a single slot. That really feels like a chore though and getting coins effectively is only possible in Knockout Challenge, so it really feels a lengthy road to grind for extremely little results. 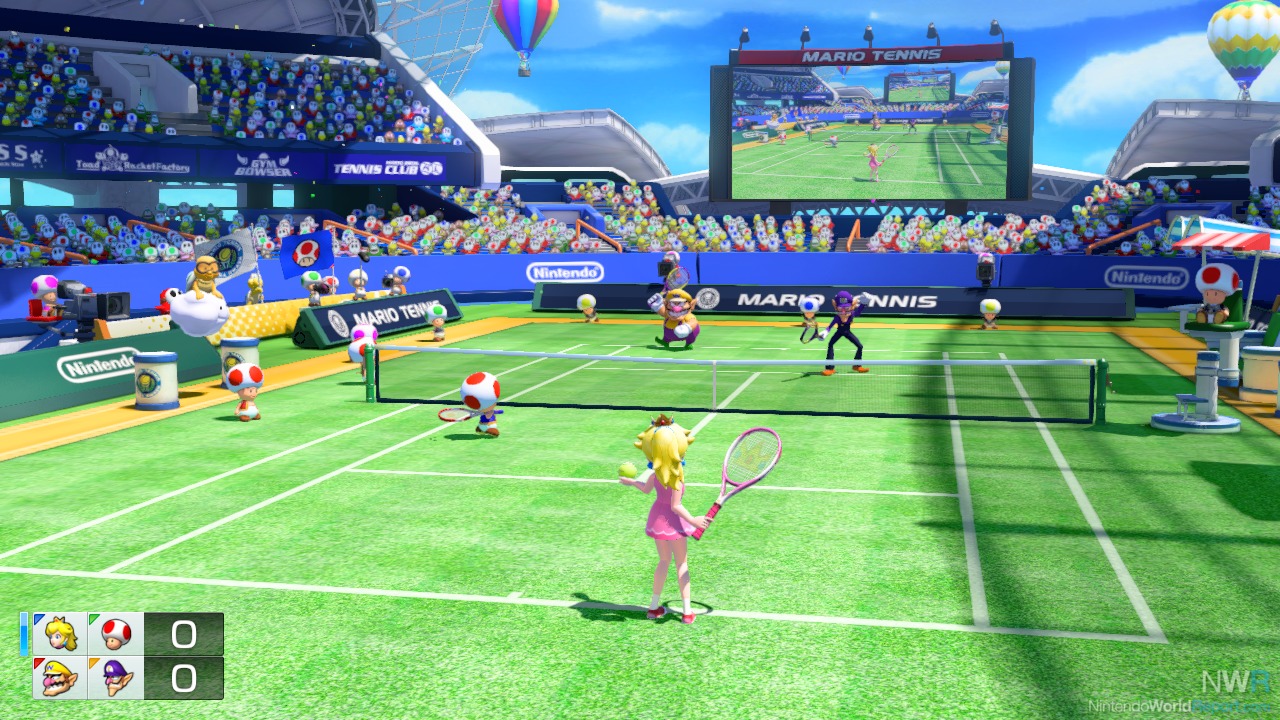 As far as the presentation of Mario Tennis: Ultra Smash is concerned, it looks fine. The single stadium is visually draining, but the characters are well animated and the game is clean enough. The menus aren't really entertaining to look at, but they do their job I suppose. What is insulting in all of this though, is that they use old character renders for the character select screen and the Knockout Challenge. This to the point where you see Peach, Daisy and Rosalina in their dresses, while being in their tennis outfits in the actual game. The music isn't anything to shout about either. It doesn't really have that Mario charm to it and feels like music of any given sports game. It is good background music, but that doesn't mean that it fits the formula.

Mario Tennis: Ultra Smash feels like a disappointment in every given way. With one stadium and limited online options, you already see how this game is shaping up. Then you also take into account the slight changes to the formula and how little everything in the game seems to matter. The game feels like a gap filler and not a great one. It fills the niche for a Mario sports title on Wii U, but it also feels like a fall from grace at the same time. Even when compared to Mario Tennis Open, Camelot wasn't inventive or creative with this one. That makes the situation so darn depressing.

Mighty disappointing but quite sobering to read. Nintendo is just moving on from the Wii U, and it leaves a sour taste in my mouth. It just can't end a console on a good note-- two home consoles in a row, and one was actually selling really well yet stupidly ended with a lack of support.


Unless there's free DLC being planned for this outing, this is the first Camelot sports game I'm actively avoiding. Way too little content, embarrassingly so, and poor online for the price.

Agreed!! I expect some form of DLC to follow this title. If not then I'm not touching this one.

Agreed!! I expect some form of DLC to follow this title. If not then I'm not touching this one.

Something like Splatoon's roll out would be lovely. I'm not hopeful, though, but I do really want this to be good. I'm such a sucker!  :Q