We played Mario Kart 8. It's more of the same, but that means it's awesome electric fun, generally.

Mario Kart 8, as a per a recent demo at Nintendo’s New York offices last week, seems to be exactly what you’d expect. We got to go hands-on with a new build of the long-awaited Wii U title, and it was impressive in some regards while woefully depressing in others. One thing was clear, though: this is Mario Kart like it was on Wii and 3DS, only now it’s in HD with new tracks. It follows the same structure of eight cups, with four featuring new tracks and four featuring retro tracks, making for 32 tracks in total. 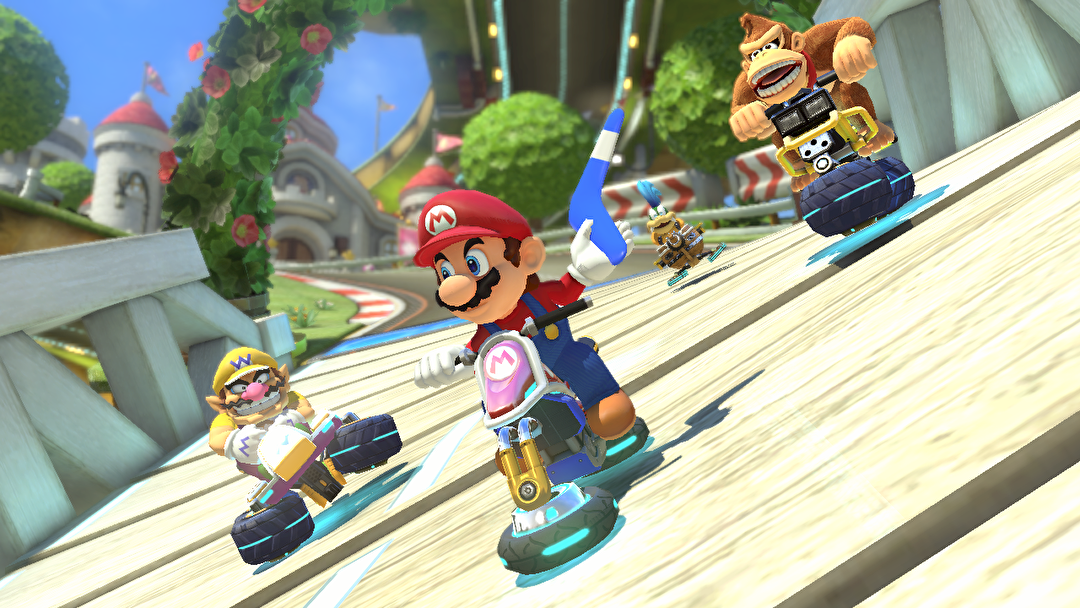 Still, Mario Kart 8 looks absolutely gorgeous. The characters, which now include Metal Mario and Shy Guy, animate beautifully. I loved seeing all the Koopalings show a ton of personality in how they moved and jostled as they raced. Seeing Roy Koopa fist pump when he launched an item is super cool, as is seeing Lemmy Koopa move around erratically. While it’s tough to notice when you’re racing, the environments are stunning as well, especially when you look at how the inversions and loops all link together. One retro stage we saw from Mario Kart: Super Circuit had a wonderful vista that showed nearly the entire track.

Racing feels mostly the same, as you can use the GamePad, Pro Controller, Wii Remote and Nunchuk, and Wii Remote to play. Some key differences are how items are used. Instead of being able to hold onto items like you could before, you can really only have one at a time. So, instead of holding a train of bananas behind you while you get another item block, you can’t get another item until you use the bananas. Personally, I like the way that alters the strategy, putting more emphasis on quick reflexes and smart item management rather than stockpiling protective items like a kart-racing chipmunk.

Two new items were shown off in the demo as well: a piranha plant and a boomerang. The piranha plant sits in front of your kart and eats items and other racers that then in turn give you a boost that gets bigger the more your plant eats. The boomerang hits enemies that are around you, which is awesome for clearing out a crowd of racers.

Also, there’s a new technique where you can sideswipe other racers when your wheels are in anti-gravity mode to get a boost. It sounds weird in writing, but it makes sense when you see it. Your character does a 360-degree spin and then boosts when you do so, and you can even chain it together for a bigger boost. Those boosts certainly make close-quarters racing more dynamic.

There’s still a lot we don’t know about Mario Kart 8. We haven’t seen the online at all, though it is confirmed to feature 12 players with two being able to go online on the same system. We’ve heard scant details on “Mario Kart TV,” which is some kind of highlight reel thing that you can share online, I think. We haven’t heard anything about a battle mode or any kind of four-player split-screen (we only played two-player locally in this build) other than that they exist. Mario Kart 8 is looking beautiful and fun, but it’s not shaping up to be much of a unique shot in the arm.

So what were the new courses like?  Was there much evidence of rubber-banding?  Did the blue shell show up a lot?  I felt like MK Wii was really cheap in the 1p mode, while MK 7 was way more balanced (you could get ahead and stay ahead), so when I read that 8 plays just like Wii and 7, I'm left scratching my head just a bit.  Could you provide some more detail?

Are Mii playable? If so, how is the voices of Mii?

About gamepad,  I know you said, it features map. But, are you able to see another racers' item?


I'm disappointing about the uses of Gamepad too. I thought it would be like Wii U Street, able to look our surrounds. Dang, that's suck.


Thank you guys for showing previews to us.

Concerning the touch pad it sounds like Nintendo is dropping the ball, AGAIN. There's so much they could've done with it but didn't. But it looks like it'll still be a great game.

Game looks amazing so far. Just need them to finally confirm my most-wanted character, Fawful. Always loved that character, and it would be a great way to celebrate the re-release of his first game on the Wii U Virtual Console. Also they haven't confirmed veterans like Bowser Jr. or King Boo yet. But other than that this game looks like definitely the best in the series.

Perhaps we should nag Ninty for an update allowing 2-player 2-screen multiplayer. That seems like a silly omission.


also be nice to throw in BoomBoom & PomPom as unlockable drivers.....
and RAYMAN & GLOBOX, for having Mario & Luigi iterations on Legends. Nintendo!!