Mallo and his friends are back in Crashmo/Fallblox for even wackier adventures with blocks!

It seems not that long ago that I finished Hiku Osu (aka Pushmo, Pullblox) and felt fulfilled after playing many user generated levels. I had fun with the game, but ultimately there was no room for me to explore it further. Considering the original is still one of my favourite 3DS games, I had hope and enthusiasm going into the sequel, Hiku Otsu (aka Crashmo, Fallblox). 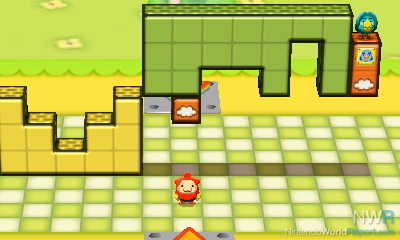 The game opens with a colourful animation of Mallo meeting Poppy, Papa Blox' grandniece. Poppy arrives in a big basket piloted by 100 birds. After a short introduction and some small talk, Mallo shows Poppy his special sumo stomp, but things go bad and he startles the birds. Feeling bad, Mallo starts his journey to gather all the birds to make sure Poppy can go home safely.

Hiku Otsu shares a lot of ideas with its predecessor, though it is also introduces many others. You still push and pull out various blocks to dismantle and reach the top of structures. With the introduction of gravity, however, the rules change. You can turn puzzles 360 degrees, and depending on how you move blocks, certain pieces fall to the ground. You can move blocks in all four directions, which makes it tougher to find the solution at times. Unlike the original, you can also now pull blocks onto the surface you stand on. 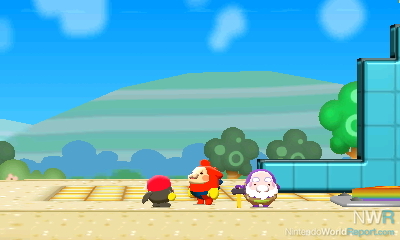 I began with a selection of tutorial stages, which explained the rules piece by piece, and afterward got to try the first few puzzles. These introductory stages can frustrate at first, though you now have the option to skip a level at your leisure without punishment. You’re rewarded if you finish a puzzle later, though, and you can only complete the story if you finish them all, so this decision makes sense. After the first set of regular stages, I encountered the first real mechanic in Hiku Otsu, cloud blocks. These blocks remain in the air even if something is placed on top of or under them.

In the original, you could speak to Papa Blox for information on various moves and gameplay mechanics, and while that option is still available, you’ll find new things the associated menu that pops up. The most important is a group of new training levels in which you learn the gameplay mechanics at a much slower pace. Here, you always have Papa Blox to assist you. This mode may benefit those who didn't play or had problems understanding the original, and helped me better understand cloud blocks. Under another option, you can watch various movies, as well as banter with the birds you have collected. You can set camera and audio controls here, as well as activate SpotPass. By doing so, you will receive additional puzzles from Nintendo for you to play. 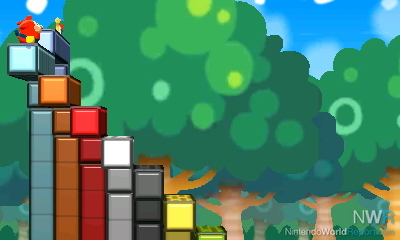 Sadly, I haven't had much time to explore the game’s new editor. It seems functionally similar with a few new elements thrown in. The game offers three different save slots, so if you share your system with anyone else in your household or want to experience it all over again, you will have the option to. Finally, players can take in-game screenshots by pausing the game and pressing the X button. You can share these pictures, and view them in both 2D and 3D.

Hiku Otsu left a very good first impression on me, despite the higher difficulty and the large amount of new rules. The game has higher standards than Hiku Osu and it certainly doesn't shy away from challenge. Look for the western release of Hiku Otsu (or Fallblox and Crashmo, as it is called in Europe and North America, respectively), later this month on your local version of the Nintendo eShop.