The sequel isn't a push-over.

Mallo and Papa Blox return, along with Papa's grand-niece, Poppy. Mallo introduces himself to her with a characteristic sumo shiko stomp, startling the birds who had carried Poppy in on a hot air balloon-like basket and causing them to seek refuge on the top of Crashmo structures. Mallo must collect all of the birds so that Poppy can go home.

Crashmo is structured entirely like Pushmo, with levels made up of large, colorful blocks that can be pushed and pulled whereby Mallo must jump to the top of each level to collect the bird. While superficially similar, the rules have changed, and the blocks are no longer expand from or are tied to a support structure. As the Crashmo/Fallblox names imply, blocks that have nothing under them come falling to the ground. They cannot tilt, however, so even a single cubic support piece is enough to keep them suspended. Mallo can now grab and move blocks forward and backward and side to side, and can now pull out blocks onto the surface he is standing on. Mallo can even balance the Tetris-esque blocks on his head, though his movement is severely limited in this situation. 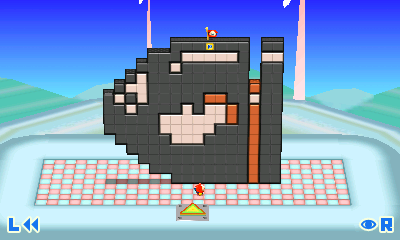 The first two sets of stages I played consist of tutorial levels, which introduce the concepts of the game with relatively simple puzzles. It was evident even from these early stages that the puzzles afforded by the Crashmo rules could be much trickier than those of Pushmo. Without a solid support wall, players must find ways of keeping blocks suspended by moving other blocks into place, and it is very easy to push the wrong thing and have the structure collapse, forcing a rewind or restart. To aid with this increased complexity, you can now view puzzles from multiple angles.

Like its predecessor, Crashmo also includes a level editor with QR code import and export so that players can create and share their own designs. Later levels apparently introduce doors and other more complex mechanics, such as cloud blocks that float on their own. 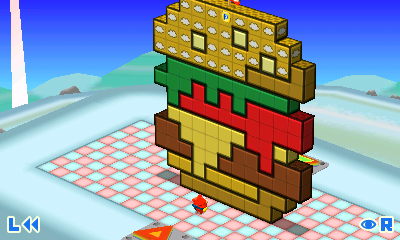 Pushmo was a surprise with its simple, yet very engaging and ingenious puzzle designs. Crashmo deftly continues and expands that tradition. I look forward to its November 22 eShop release.

Really looking forward to this game. I completed everything the first game had to offer (at least in terms of official levels) and am eager to see what this sequel brings to the table.

With regards this statement,

"Without a solid support wall, players must find ways of keeping blocks suspended by moving other blocks into place, and it is very easy to push the wrong thing and have the structure collapse, forcing a restart."

I was just wondering whether or not the rewind feature is still included? That was a real time saver in the original.

Yes, forgot to mention that.

I would imagine so as that would degrade the overall experience if they removed it. It was practically mandatory on the later puzzles.

This game is gonna be great, but man... it's gonna be difficult.


I hope they lighten up on the tutorial this time around, though.

Unfortunately, no. There was way too much tutorial again.

We really need a mobile version of this site. My Safari browser keeps crashing every time I write a comment.

Anyways, I love these new experimental games from Nintendo. That's the beauty of digital distribution, it gives smaller games a chance to shine.

Anyways, I love these new experimental games from Nintendo. That's the beauty of digital distribution, it gives smaller games a chance to shine.


True. I'd love to see some brand new Art Style games on 3DS. I was replaying Light Trax and Orbient last night and remembered just how good those games were. The only downside was that they weren't on a handheld, which is where the series really shines for me.

Knowing Nintendo, we'll get Orbient on the 3DS when that series of GBA games it comes from hits the Virtual Console, which will happen in North America in 2015.

Funny, the two you mention, Light Trax and Orbient are remakes of GBA games, Dotstream and Orbital.

Can you imagine how cool a Stereoscopic 3D Light Trax would be? I mean it's the music that really makes that game for me, but the minimalist, almost Tron-inspired, look adds alot and who knows what they might be able to do with it in 3D.

I wonder if they'll ever do something as radical as Soundvoyager again. With today's technology, you could even move around in 3D space.