This adventure is showing some real depth.

Although Nintendo showed a demo of Paper Mario: Sticker Star during their E3 3DS Software Showcase, the game wasn’t playable to attendees. During PAX Prime 2012, while on the show floor the game was being demonstrated once again to the public, I was taken behind closed doors to get my hands on Mario’s latest paper adventure. Though the demo I got to play was just a portion of what Nintendo showed during the Software Showcase, I did notice a few things in my brief play through.

There’s an overworld map very much like what players are used to from Mario Bros. 3 and the New Super Mario Bros. series. While I wasn’t told how many areas or different environments there will be, they did have the trademark 1-4, 2-3 type naming convention. Visually, everything has a nice diorama look to it, but the 3D effect on the 3DS XL I played with felt a bit off during my demo so I turned it off. 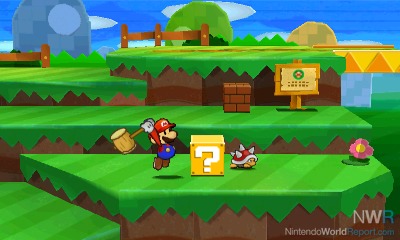 Stickers can be found everywhere in the world and are used for everything: solving puzzles, getting into new areas, and most importantly, combat. While Super Paper Mario ditched the turn based combat, in Paper Mario: Sticker Star it's back and your moves and actions are controlled by choosing stickers from your sticker book. Jumps, line jumps (jumping down a line of enemies), shells and flower powers are just some of the stickers you’ll pick up and utilize in battle. After you choose the sticker attack you want, you’re asked to confirm your choice of attack, and then the action battle sequence begins. There’s a break between choosing the sticker and the attack beginning, which is a good thing. Just like in previous turn-based Paper Mario titles, after the attack is initiated you can increase the intensity of your attack and block enemy attacks by timing your button presses. It all feels familiar and great, and while we've only seen some stock Mario moves, I’m curious to see what new elements they decide to drop into the mix.

Stickers are also used to solve puzzles, and you’ll encounter different real-world things in your adventures, such as an electric fan. By "stickerizing" these items, or turning them into stickers, you can use them to solve puzzles. For example, by using a giant electric fan to blow enough wind to power a windmill, you can enter new areas. Unfortunately, I didn’t get to see any new uses of "stickerizing" but I get the feeling that it will be one of the main ways of progressing through the game. 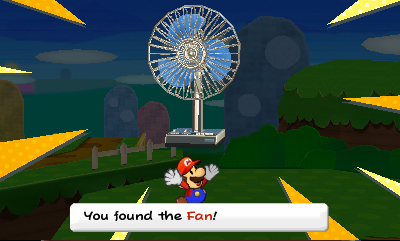 Sadly, after turning on the fan and powering up the windmill and going inside (which included a number puzzle that I didn’t have the answer for), the demo was over. Just a few battles, a puzzle solved and kaput; an all too brief taste of Paper Mario: Sticker Star and I’m hungry for more.

Sounds good, can't wait! Also, the official boxart has now been revealed, so you don't need the fanmade one anymore.

It’s nice to see some impressions for, arguably, this winter’s most anticipated 3DS game given by Mr. Berghammer. This is out of context and belated; but I just wanted to say thanks for reading my letter personally on RFN: 297 and the discussion that ensued those weeks back. I’m privileged to participate in such spirited dialectic. And of course, thank you to everyone at RFN, Famicast, and Connectivity, which also help to keep me sane for another week, as well.
That aside, I’m holding my breath, and my wallet, for a white 3DS XL- Paper Mario bundle to come state-side this holiday, reminiscent of the SM3DL bundle last year. Either way, I’ll probably be buying this game and Wii U within a week of each other. The wait is unfortunate; however, I’m happy enjoying the dwindling days of summer while I can.

This was the reason I bought my 3DS to begin with.  I watched an analysis video on YT last night and saw some things I don't remember, like the Yosphinx.  It looks good.

Did anyone notice BOWSER JR. in the official boxart?!

This shall be glorious.

I don't have a good feeling about this game.

I have a good feeling about this game.

I am very happy that they brought back the turn based combat. Super Paper Mario(Wii) was a very shallow game. Without the combat mechanics it became a subpar Mario platformer with a slight twist and annoying character switching. It didnt help that the villian, the writing and the environment just weren't up to par with The Thousand Year Door. I haven't finished SPM yet, but it has been a has been very Bleck experience.

Wait a minute, what is Billy doing back here?

Weird for a Paper Mario to take up the traditional world map structure with levels numbered 1-1, 1-2 etc. I could have sworn there was footage in this year's E3 trailer that showed Mario in a hub town sort of environment with shops and stuff, like all the others in the series.

One of the main reasons I got a 3DS. I can't wait. If it's half as good as TYD on gamecube it's still gonna be awesome!

You did see Mario in a hub-style town.  Maybe the world structure is similar to Zelda II.

Hey all! Glad you liked the brief impressions, and sorry they're so short. I really wish Nintendo had more to play. As why I wrote this for NWR, Neal needed some help with PAX coverage, and since I was going I thought it would be fun to help. Got one more preview coming later today, but overall there wasn't too much new stuff at PAX that hasn't been reported before or that I felt qualified to cover.

Billy will always be the founder.

Occasionally, he'll be a contributing writer.

But mostly, he's just the dude that we all look at and go "hey man. Thanks!"

He is the Eternal Founder.

I love that shading! 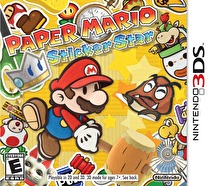