Rayman do what Mario don't.

So I played a lot of Rayman Legends today, and let me tell you something: it is great. I’m a great fan of its prequel, of course, having earned my first and only Platinum trophy on the Vita version. Rayman Origins is the kind of frenetic, “get in the rhythm” platformers I love. If you haven’t played it yet, you probably should—but not on 3DS. Get it on any other platform, even the Wii. 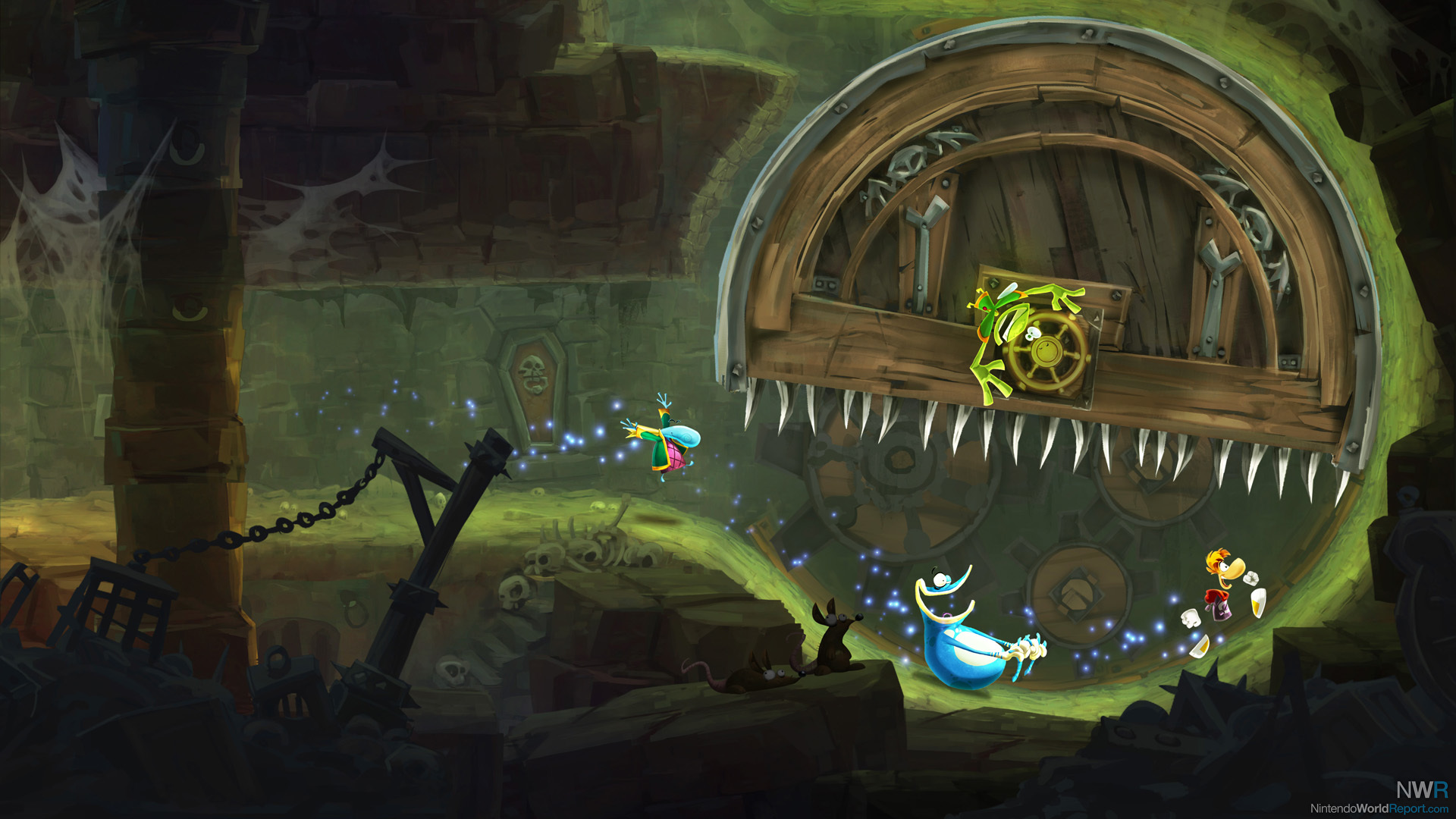 Based on the two stages demoed at E3, Rayman Legends is a very similar game, only somehow prettier. It has a more pastel look, and there are things going on in the foreground and background now. The core platforming gameplay is exactly the same as in Rayman Origins: our limbless hero can wall-jump, slow his descent with the power of hair, and run up curved walls. You do all this with the amazing Wii U Pro controller, and you can use either the stick or D-pad to move.

But it’s the second player, cooperatively (“asymmetrically”) playing on the GamePad, who does a lot of the legwork. The second player controls a little critter who adjusts the environment to allow Rayman to run through it. The GamePad displays what the TV displays, but tapping something on the screen, like a flower bud, causes the flower to bloom and Lums to pop out. The second player can tap individual yellow Lums (or slide across a line of Lums) to turn them purple—thus increasing their value—and actually drag enemies to Rayman for quick disposal. More importantly, the second player can activate switches, cut ropes, and generally make navigation possible for Rayman. The most interesting aspect of this is with tilting platforms.

You know how in New Super Mario Bros. Wii certain platforms can be tilted by similarly tilting the Wii Remote? It’s a similar situation here: the second player taps a gear on the GamePad and then contorts the controller to tilt, twirl, or rotate that object in the game. One puzzle had the second player rotating a giant cylinder with platforms and spikes within. As Rayman moved through the maze-like cylinder, the second player rotated the entire structure to allow the first player to reach the goal. Very fun stuff!

One quick section of the demo saw Rayman traversing a collapsing environment while the second player used a giant slingshot to pelt dragons with rocks before they caused further damage. The slingshot worked just as you’d think it would: you slide back and release! 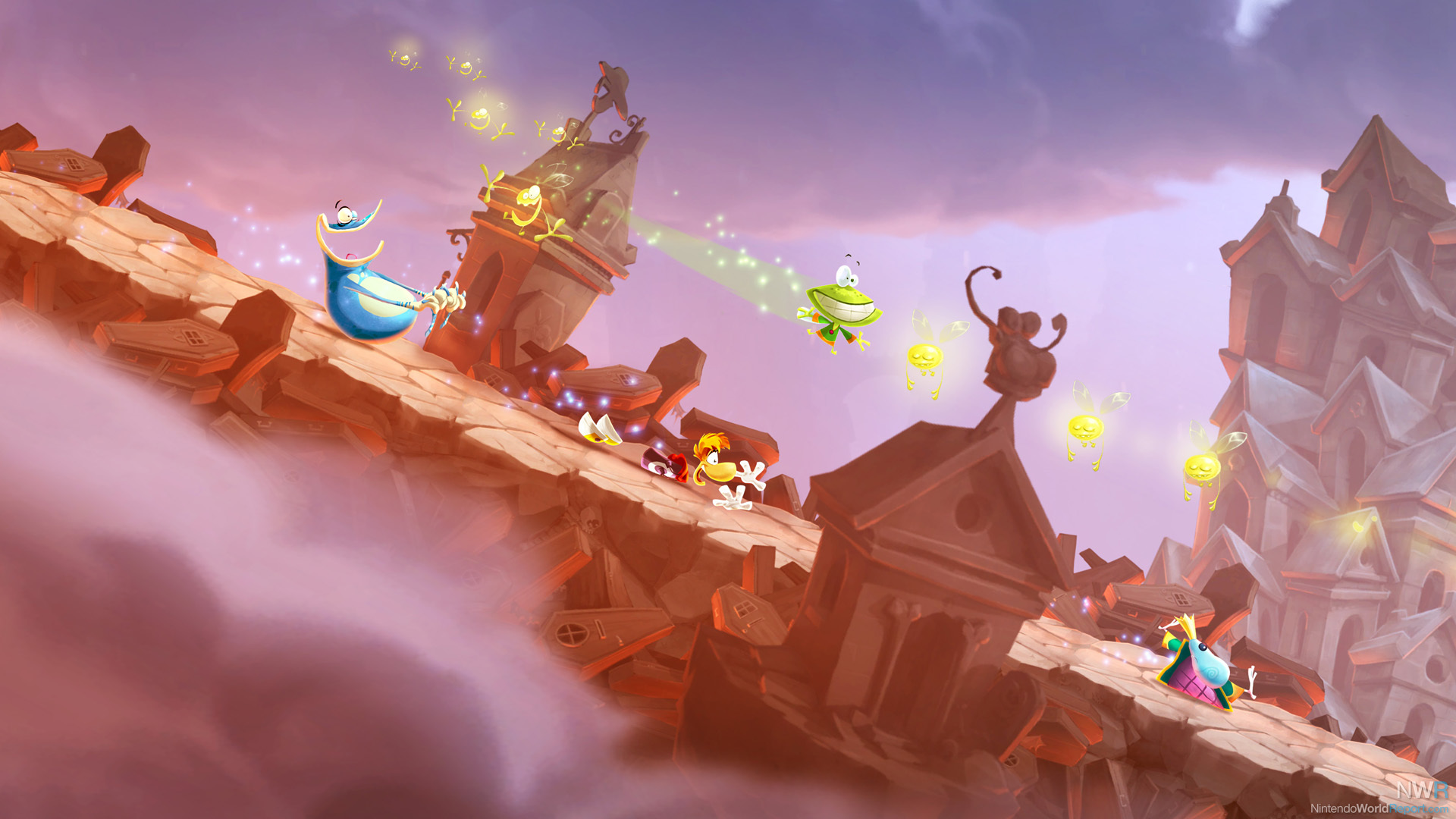 The final section of the demo was the most fun, in my opinion. It’s a fast-moving stage in the manner of the “chase” stages in Rayman Origins, but minus the paranoid treasure box. While Rayman sped full-tilt through the Land of the Livid Dead, the second player would tap eyeball icons in time with the music to give Rayman giant Lum bonuses at every turn. From the perspective of a Rayman Origins expert (like myself, the author says humbly), this chase sequence was insultingly simple, but a great many players in line before me had incredible difficulty NOT dying every five seconds.

The second player stuff is far more than some easy “girlfriend mode.” It’s an integral part of the co-op experience and the players must be in constant conversation to get through entire sections of the game. Far from providing a simple safety net for the primary player, the second player is actually responsible for managing the flow of the stage. I loved being on both sides of that relationship. Questions do, however, remain.  For one thing, one can only assume that, based on the previous entry in the series, Legends will be released on multiple platforms. If so, how extensive is this Wii U multiplayer component? Will it be regaled to a handful of “bonus content” levels, or will it be a meaningful, lengthy experience? Either way, what about the single-player mode? My wife’s not going to want to help me beat this game, so I’m gonna need a way to play through it myself. Unfortunately, no solo levels were demoed. Still, Rayman Legends looks great, the two-player stuff is phenomenal, and I could always use more Rayman Origins-type platformers. Nobody would tell me when it’s coming out, but I’m really looking forward to it.

This was confirmed as a Wii U exclusive, wasn't it?

I think this was confirmed as a Wii U exclusive.

This game impressed me the most, it looks like it is extremely fun to play.

I've seen reports online that it's a Wii U exclusive... but nothing really confirming that claim. Given how much bad info gets circulated by non-gaming press during E3, I'm going to assume that Rayman Legends is actually multi-platform with some Wii U exclusive features that were shown off in the demo until Ubisoft clarifies one way or the other.

Well they didn't announce it for any other platforms so it's atleast a timed exclusive.