We all know why I want this.

Code of Princess is an Atlus-published 2.5D brawler with the minor RPG elements. You level up and gain stats, but you can also find or earn new weapons or armor and equip them across your playable characters. There are up to 50 playable characters, but I'm only interested in the titular princess. For obvious reasons.* Here's how simple this game is: you select a mission, and then kill everything in the room. Sometimes you need to protect some people, but even so, you're just killing everything. You can attack, briefly boost your attack power, block, and switch between three planes of the stage. Again, you basically kill everything and move on to the next mission. The little strategy that does exist amounts to selecting different characters, who have different stats and attacks, for the mission. It's also fairly important to prioritize enemies, especially when there's a boss around. Experimentation DOES pay off. You can also flip between three or four color schemes for each character. So that's a thing. 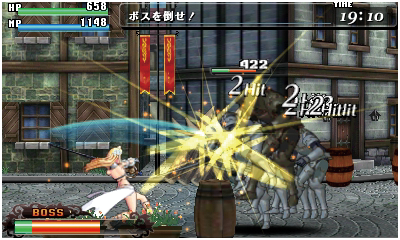 The game is "hopefully" launching this fall in a special bundle that includes the game, a CD soundtrack, and an art book, so par for the course for Atlas games. It's certainly MY kind of game, but it's a pretty shallow experience (in every sense of the word)

*She's the one on the cover. What's great is that the title covers up the "best" feature of her costume: metal pasties over her nipples. Between that and her metallic bikini bottom, she's basically naked.

Bears mentioning that Solange Blanchefleur de Luxe (the princess) is pretty much the only female character that leave little to the imagination. The other characters are more modestly dressed.

The game looks like a very fun beat'em up. Glad to see Atlus pick it up. 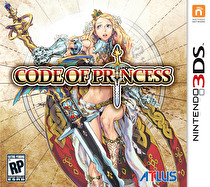