It's the awesomeness of Tekken in 3D!

This morning, we were at the presentation of the upcoming Tekken titles Tekken Hybrid for Playstation 3, and of course Tekken 3D for Nintendo 3DS. The presentation was led by the series producer Katsuhiro Harada. Tekken is the long-running fighting franchise from Namco Bandai. The game is slower than Street Fighter, which allows more tactical gameplay. It is all about anticipating your opponent's attack and reacting to it with one of your moves.

Within the brief demo I noticed that the buttons and layout have never felt this refined, which is a huge step up from the games on PSP. The Circle Pad in particular gives better control over your character. Even in 3D, the game will always run in silky smooth 60 frames per second. This might be a first so far as fighting games on the 3DS are concerned. The various HUD elements, characters and background all look nicely rendered in the third dimension.

The demo we played only had a handful of characters, but from what we saw, the roster might be quite large. Also included in the package will be the movie Tekken: Blood Vengeance, fully playable for on the go. As it stands, though, Tekken for the Nintendo 3DS is the next exciting fighter to hit the system, and will do so in early 2012.

This will probably be the first Tekken I get. Though after Soul Calibur 2 all I ever do is look down on Tekken. Maybe some of you who are very familiar with both can explain my line of thinking. The movement of the characters feels very stiff and less fluid than the Soul Calibur gang, I find it hard to believe they come from the same people. Or maybe they don't?

Hey Daan did you see that girl who does Monkey Kung Fu? She is the only reason why I want any Tekken game. I love monkey kung fu. 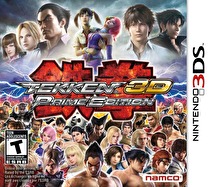