Mario gets a new set of wheels.

The game of Mario Kart varies slightly with each new iteration. This year at E3 Nintendo openly acknowledged this apparent stagnation by claiming this Mario Kart is simultaneously comfortable and new. After a brief video presentation and a healthy chunk of hands-on time with the game, Nintendo seems to be on the right track.

Our demo consisted of three two-lap races on different tracks with the choice of several racers and customizable karts. The first track highlighted the new hang glider element of Mario Kart 3DS. Upon hurtling off a jump in the track geometry, the player's kart sprouts a Pilot Wings-esque glider which features the familiar controls of the 3DS launch title. Our handler noted that as players progress through the game's races they will unlock new sets of gliders, wheels and propellers.

The propellers came in handy on the second stage, which included an underwater segment. When racing underwater, karts have a bit of float to them, tilting drastically as you round the corners. While novel, I didn't feel that the underwater segments added much to the core game of Mario Kart. The third and final track was set deep within the jungles of the Donkey Kong world, complete with enemies from the recent Donkey Kong Country Returns.

While the graphical element of the game certainly wowed me, I am left with the question, does adding customizable elements to Mario Kart sufficiently deepen the experience? That remains to be seen, as players were locked into a single kart configuration of their choice for the duration of the demo. It also wasn't clear just how much content would be added in terms of kart components. I'm still excited, if only for the prospect of extended flying levels in the full game.

Mario Kart DS killed my hands since I spent so much time squeezing the shoulder buttons to drag items and slide.  Have those controls changed?  I'd really like to see a press once to drag, press twice to fire option for items.

Adding these DKR elements is something I figured Nintendo would have done YEARS ago, like say for the very first Mario Kart since DKR was released.  It seems like such an obvious idea and yet they spent time screwing around with two riders per kart.

It makes me more interested anyway.  Not so much for this game but a future console Mario Kart with these elements in it.

I'm shocked no one has commented at all on all the nifty homages to 3D Hot Rally they've somehow managed to pack-in in a subtle, yet still somewhat obvious manner. I think that's one of the most interesting aspects about this game. 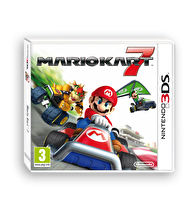