A rundown of the system's look, included applications, and ability to multi-task.

At the Nintendo 3DS event in New York City I was able to spend a lot of time with the system, looking at its near-final design, menu screens, and more.

First things first: I think the news of the system's "hamburger/taco" look has been greatly exaggerated. In pictures, the three-layered design of the system does look kind of ridiculous when closed, but in the wild it doesn't look goofy or stupid. As can be expected, the screens look wonderful. While DSi XL owners may be disheartened by the smaller screens, every other DS owner should be totally fine with them. 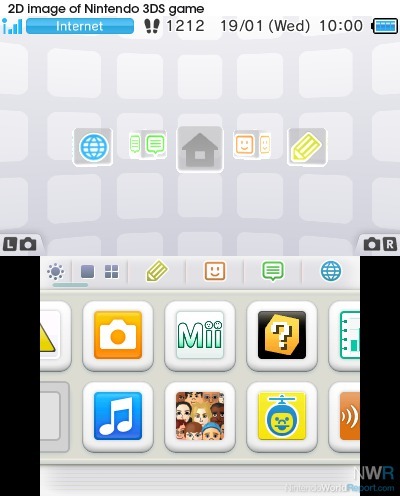 The system's menu looks like it can be organized in different manners. There's a UI that looks similar to the DSi's, and one that takes those icons that are present on DSi and makes two rows of them. It fills up the screen more and makes good use of available space. As evidenced in our video of the menu, you can tell that every icon has its own start-up noise, which is a nice touch.

Several different applications come pre-installed, including the AR (Augmented Reality) Games, 3D Camera, Mii Maker, Face Raiders (check out my impressions of the game here), and DSi Sound (which is extremely similar to the sound application included on the DSi).

The AR Games are the best showpiece for the system. First shown at E3 2010, they begin when you set up a card (included with the system) and use the outward-facing camera to view it. Then, the world changes around it on the 3D screen, and you have to move around the card in real life to shoot targets. In the demo at the event you eventually fought an intense and clever battle against a giant dragon statue.

The 3D Camera allows you to take 3D pictures and export them to an SD card. While you can't view them in 3D off of the system, you can easily upload them to your computer. You can also do a face merge, which is similar to a feature on the DSi Camera application, except that it now it uses the inward and outward camera at the same time. It's novel, but most of the time it looks ridiculous.

The same goes for the Mii Maker, which allows you to make a Mii from a picture of yourself. The Mii I made with my picture had a forehead large enough to fit another Mii's face on it. I might not have a small forehead, but hey, it's not freakishly distorted! 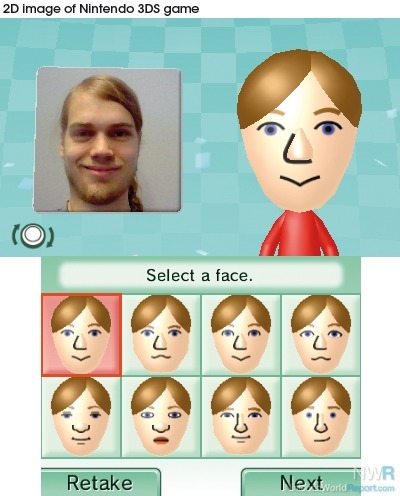 Aside from the failings of the picture-taking aspect of Mii Maker, it features all of the content of the Wii's Mii Channel and more. You have several different new hair styles, accessories, and more to choose from.

The 3D Camera and the Mii Maker are more similar to the DSi Camera and DSi Sound applications, meaning that they're fun for a few minutes and are then only cool when you need to occupy a child for a half-hour (I easily have 150 pictures on my DSi from nieces and cousins). However, the 3DS allows you to rudimentarily multitask. You can pause an application or game, and then head back to the main menu. There you can scroll through the applications to your heart's content. However, when you open another application or game, the one that was originally paused shuts down.

Some of these 3DS applications might be throwaway, but almost all of them show off the 3D effects and potential of the system. The 3DS might not come with a full game at launch, but the included content is still fun.

"hamburger/taco" look? I have not seen anyone say this, especially since it basically looks just like a DSi.

You can't view the 3D pics on the system? So you have to be one of the small niche crowd that has 3D-enabled computers to see the 3D pics you take?

I want to try out the AR games.

The top half is slightly larger than the bottom (which is two toned).  If you look at some pictures of the 3DS closed you'll see what they mean.

And I think you misread what was said about seeing the 3d pictures.  Basically you can only see the 3d pictures on the 3DS.  It was just worded differently.

And I think you misread what was said about seeing the 3d pictures.  Basically you can only see the 3d pictures on the 3DS.  It was just worded differently.

Ah, OK. I guess it was just how it was worded that confused me.

The part about multitasking is partially correct, but also incorrect. When multitasking you can return back to the game only when using certain applications like the internet, friends list, etc.

So it doesen't come with any game?

So it doesen't come with any game?

"Several different applications come pre-installed, including the AR (Augmented Reality) Games". Plus, Face Raiders is a game too.

How well does finger prints and smudges show up on the finish of the 3DS?

How well does finger prints and smudges show up on the finish of the 3DS?

Looking at the AR game video about, I couldn't see any smuges at all, of course, this could be because of the camera, or maybe that particular 3DS had not been used much. 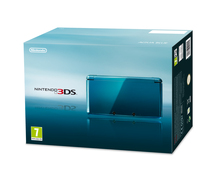