It’s been a while since Mario has seen multiple releases of his core titles on the same platform. But the genius of Super Mario Galaxy just couldn’t be contained in a single game, so now we have Super Mario Galaxy 2. I’m not sure what the story is, or even if there is a coherent story, but again, the basic goal is to rescue Princess Peach. The Lumas are back, but it’s not clear whether Rosalina will make an appearance. The Media Summit demo had seven galaxies and two Bowser Jr. battle stages available for play chosen off of a menu, so there was no hub area on display.

Sky Station Galaxy was a simple level designed to introduce players to the game. First, Mario visits Yoshi’s house, but he’s not home (big surprise). The level ends with a Petey Piranha battle. The basics of the game are the same as its predecessor, including the collection of stars to complete the level. If the levels shown here are any indication, the game is much more focused on creating clever and challenging level designs.

Spin-Dig Galaxy introduces the drill item. With the drill, Mario tunnels straight down through the level and comes out the other side (there is no interaction inside of the planet). If he hits an obstacle, he rebounds back. A puzzle component is added here as certain areas are only accessible by drilling. Players must keep a 3-D spatial map in mind in order to read the other side properly. One example of this was a planet with several tall pillars, pillars too tall to jump to. But by running to the other side of the planet and drilling, Mario could make his way to the top. The stage ended in a boss battle. Digga-Leg, cousin of Mega-Leg from the first game, must be defeated in a manner reminiscent of the Raphael Raven battle in Yoshi’s Island. As the enemy chases Mario around a 2D circular planet, you must time your drills through the planet to impact the bottom of the boss while he has his glass surface exposed, and not when he has his drill exposed.

One thing that struck me is that Nintendo may be playing around more with changing our conception of what makes a level itself. With the drill, players are no longer bound simply to the surface. And while it wasn’t in any of the levels I played, the latest trailer showed certain enemies dynamically dissolving parts of levels, something that was played with in the first game.

Hightail Falls Galaxy introduces Mario’s dino pal, Yoshi. While you ride him around like in Super Mario Sunshine, the tongue mechanic has a separate and natural targeting mechanism: the Wii Remote pointer. By pointing and pressing B, Yoshi will lash out his tongue in the direction marked by a red cursor. Yoshi’s elastic tongue can be blocked by obstacles, however. In a nod to Yoshi’s story, Yoshi has his own set of power-ups, each a type of fruit. In this galaxy, the spicy Dash Pepper makes Yoshi do his best mad Wiggler impression, giving him extra speed necessary to scale walls, but at the expense of control. And of course, you’ll have to navigate winding paths in this energized state, where a mistake means tumbling to your doom.

Tall Trunk Galaxy also features Yoshi. Here, Yoshi must eat Blimp Fruits. Doing so turns Yoshi blue, and fills him up with something like helium, allowing him to float until all of the gas leaks out. The level has players making their way up a tree, then around a 2D level wrapped around a cylinder (so you can fall around it forever), another 2D level cut out of a disc, and final area full of spiked enemies waiting to pop Yoshi. Players must time their use of the fruit carefully, floating from one fruit to the next, or grabbing fruit out of the air with Yoshi’s tongue before they fall. Get knocked off Yoshi, and expect to have to chase him around for long distances or until he gets killed after which he’ll respawn from an egg.

Upside Dizzy Galaxy brought back 2D areas with gravity zones that debuted in the first game, zones where the arrow and color indicates the direction of gravitational pull. These were some of my favorite areas in the original, and the level uses them to create a puzzle of sorts.

After a bit of platforming over lava, Bowser Jr's Fiery Flotilla introduces a flying dragon enemy named Gobblegut, which is reminiscent of Fracktail from Super Paper Mario. The boss tunnels through the planet targeting Mario. It seems all that gobbling has given the serpent-like boss some health problems as it has several bright red engorged areas that must be spin-attacked. As the dragon tunnels through the ground, it gets stuck for a short time at each red area, giving Mario some time to attack. This boss was the only problem I found with the game that I hope they fix. The boss didn’t have self-hit detection, so it could cut right through itself to kill Mario. Cheap.

Supermassive Galaxy is homage to Giant World of Super Mario Bros. 3, but the enemies are even bigger. After climbing a few stories, I tried to jump on a Goobma, and all I got was damaged. Blocks are too big to break, and even coins are too big to collect – instead they’re an integral part of the environment. For instance, I had to use a coin to wall-jump off of, timing it properly against its characteristic spin. The jumps were long, and getting hit by a super Thwomp would result in instant death. Since you can’t attack enemies directly, the drill is critical here.

Bowser Jr.'s Fearsome Fleet ends in another boss battle, but this time Yoshi comes along. Yoshi can eat Bullet Bills and spit them back out at other targets. Players must use this technique to take out Bowser Jr., who is piloting a giant mech.

Flip-Swap Galaxy, the final level available in the demo is one of the bonus stages that can be unlocked by collecting Comet Metals [sic], though specifics on unlocking haven’t been finalized. While the overall game seems to be focusing more on platforming, the real platforming challenges will be found in these types of stages. If you liked Luigi’s Purple Coins in the first game, this level is right up your alley. In Flip-Swap galaxy, platforms are flip between two positions every time the Remote is shaken. These platforms are sparsely spaced so that careful jumping is necessary. But you can’t use your spin to help you with the jump since that will flip the platform to the wrong position! On top of this, you have to collect 100 purple coins within four minutes. On top of that, you’ll have to time your jumps properly to avoid moving fences of electricity.

While we only got a glimpse at the dozens of galaxies, it’s clear that Super Mario Galaxy 2 takes the original’s impeccable gameplay and manages to refine it even more. While it looks and plays much like its predecessor, more of that greatness is welcome. With more focus on using items to create interesting platforming situations, the game may very well set the new bar for 3D platforming.

For some reason I'm having trouble getting excited for the game, no doubt I'll really enjoy it. But I'm kind of getting tired of collecting stars, and I had hoped that maybe they were changing that with this. Oh well, I'll be getting it anyway, so I guess it doesn't matter!

If the demo is any indication, collecting stars is about the equivalent of touching the flagpole.  The collection aspect is more for unlocking bonus levels like in NSMBW.  But maybe they've got more exploratory levels hiding somewhere.

For some reason I'm having trouble getting excited for the game, no doubt I'll really enjoy it. But I'm kind of getting tired of collecting stars, and I had hoped that maybe they were changing that with this. Oh well, I'll be getting it anyway, so I guess it doesn't matter!

I feel the exact same, but I think this feeds in to Nintendo not changing/improving things and we still eat it up just because it has Mario on it. I must admit, I am part of the PROBLEM.

But I need the Wii to keep on truckin, how the hell am I going to add on another console to my arm?

Collecting stars and accessing levels based on how many you have beaten instead of locations on an overworld are staples of the 3D Mario series.

Collecting stars and accessing levels based on how many you have beaten instead of locations on an overworld are staples of the 3D Mario series.

It is an overdone and boring staple of the PLATFORMING genre now. 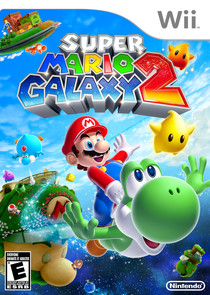