Some retailers were selling Square Enix's Final Fantasy Crystal Chronicles: The Crystal Bearers well ahead of its announced release date of December 26, and I was fortunate enough to pick up a copy. After sitting down with the game for about two hours, I've been very impressed.

First off, Crystal Bearers looks beautiful. It's far and away one of the best looking games on Wii. The environments are lovely and the characters are well-designed. Also, the accompanying music is different from anything I've experienced in a Final Fantasy game. It's jazzy in places, and is varied so far.

The gameplay, when it happens, is fun, though it could benefit from a little bit more complexity, which I hope is on its way as I work my way through the game. Right now, there are battles during which I run around and use my character's telekinesis to pick up and throw enemies, or throw items at enemies. I can see this getting crazy in later levels, but right now it's getting a bit repetitious. However, there hasn't been a large focus on it so far.

Much of the focus is on the story, which will probably appeal to fans of the Crystal Chronicles series. You play as a Clavat Crystal Bearer, who gets involved in a status quo-threatening series of events that result in crystals getting rejuvenated, and the three other Crystal Chronicles tribes are also getting involved. There's a lot of voice acting, and the story and characters are engaging enough to keep it interesting.

In addition to combat and the story, there is also a bit of exploration. It is a linear game so far, but there are a lot of side paths to wander down that reward you with treasure chests. You can also pick up materials that you can use to create new items that can be equipped on your hero to improve his stats in different ways. Occasionally you'll get thrust into a story event where the game seems to keep some sort of score, though I have no idea what effect this has on the game right now.

There are an abundance of medals that you can acquire by completing different achievements. While there doesn't seem to be a tangible reward for these, they're still fun to get. They remind me of the Super Smash Bros. Brawl challenges, especially since they're laid out on a similar grid and you'll get hints at how to unlock the medals related to the ones you have already completed.

At around the hour-and-a-half point I encountered a large boss. Since your character doesn't have any tangible weapons, you have to go around and find things to throw at the boss' weak points. The first boss wasn't anything more than a spectacular set piece, but I have a lot of faith that later bosses will feature tough puzzle-solving in order to figure out how to harm them.

The Crystal Bearers strikes me as Square Enix's attempt at a Zelda game. It's not a Zelda rip-off at all; it is still distinctly a Final Fantasy game, albeit one with no controllable party, no turn-based battles, no leveling up, etc. The boss fight reminded me a lot of some of the bigger boss fights in the Kingdom Hearts series.

The game is still somewhat enigmatic to me, and I'm interested to see where it's going. I can't yet tell if it is going to take a more Zelda-like approach, or if there will be more similarities to past Crystal Chronicles games or Kingdom Hearts. Either way, I'm hooked. The Crystal Bearers seems to be a great game that any fan of those three series, especially fans of all three, will enjoy.

Sounds promising. Please let us know if and when the game shows more depth. If the exploration opens up at some point, that would also be very appealing for me.

If I knew the street date would be broken so liberally then I would have asked for this for Christmas.

James Jones is on the review for this, so I'm not reviewing it, but I'll definitely keep everyone posted until the game is officially out.

I decided to just pick it up if I see it.

I just picked up my copy a few moments ago.

This early release is an isolated incident, but I wish more publishers did this as a pseudo-reward for pre-orders.  In 2003, when I pre-ordered PN03 and Viewtiful Joe from Capcom's old webstore (when it was good), I got both games shipped to me a couple weeks ahead of the street date (not to mention the free tshirts).  Win.

I just bought it too, from GS. It was their last copy which meant it was open already.

What came inside the box for you guys so I know if I should go return it or demand the rest of the inserts. All mine has is the booklet and the registration code.

You're in good shape, unless there's no disc.

This early release is an isolated incident, but I wish more publishers did this as a pseudo-reward for pre-orders.  In 2003, when I pre-ordered PN03 and Viewtiful Joe from Capcom's old webstore (when it was good), I got both games shipped to me a couple weeks ahead of the street date (not to mention the free tshirts).  Win.

Publishers will never do this, because it would spawn a cottage industry of people flipping desired games on eBay prior to the "unwashed masses" ship date.

How about "Buy direct from Capcom for $70 and get the game two weeks early" eh? eh?

How about "Buy direct from Capcom for $70 and get the game two weeks early" eh? eh?

That sounds like what EA does with their 'special' editions. 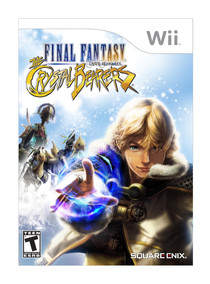