We go hands-on with the English language demo at TGS.

There’s been a lot of want for this game in the West. It seems anyone who lays eyes on the gorgeous screen-filling dragons and learns that it’s an online 4-player Wii exclusive can’t help get excited, and with good cause.

NWR were lucky enough to get a private showing of Monster Hunter Tri behind closed doors, which makes sense as no one on the Tokyo Game Show floor would want to play an English version of a game they’ve been playing for over a month.

The demo was very similar to the Japanese demo shown at last year’s show, four players linked together by a pseudo-internet that Capcom had set up for people to experience the game's online mode.

Quests generally involve building up knowledge about a particularly large beast until you know enough to go and kill it. Killing monsters gives you new weapons and armour, which is Monster Hunter’s version of leveling up; your character does not actually increase in level.

Killing a particularly difficult dragon might give you some kick-ass suit made out of its hide, or a weapon made out of some part of its body.

I thought that this was a pretty novel concept that reminded me of the boss battle rewards from the Metroid series.

There are only about twelve worlds where these monsters reside, but they will change depending on how far players are into the game.

The first time you play in a world, you might just be collecting information about the monster’s movements, collecting mushrooms, etc., and thus the area available to you will be quite small.

Later on when you’re suited up and ready to slay some big daddy beasts, the level will be entirely open to you – and the monsters.

After the game has been cleared entirely, levels will apparently change in other ways too, including palette swaps and other differences.

As Monster Hunter is an almost endless game, these changes will probably help people pushing the 300-hour mark squeeze even more out of it.

Traditional control seems to be the main focus for Capcom when promoting this game; the Classic Controller is even packed in with a version of the game in Japan. I don’t know whether this is a knock against motion control, or if it’s just to convert as many PlayStation users as possible.

We were using the new black Classic Controller Pro to control our hunters. The left analogue was used for movement, and the right one was used to move the camera.

Maybe it was because I’ve just replayed Mario Galaxy, but I thought the movement was very digital, almost as if I was using a D-Pad. To be fair, I don’t think analogue movement is relevant in Monster Hunter, but it feels like Capcom kept it in to please the PlayStation and PSP converts.

From the eight or so premade characters available from the beginning of the demo, I opted for the guy with a long sword – apparently good for beginners.

I had fun slashing away at the various small monsters I stumbled upon on our way to the final boss showdown. I liked how the world had a nice continuity to it, loading times were short, and it really feels like you are exploring some kind of alternate reality safari. Animals walk around in groups; several baby monsters will closely follow mothers, and some are docile while others will attack if you get too close.

When we reached the big monster at the end, we all began to attack it from various sides. Things were going well until it let out a loud screech into the air as if calling for help.

That’s when an even bigger monster crashed down into the arena, knocking all of us back. The Capcom rep told us politely to “get the hell out of here” as we weren’t equipped to take on that bad mother of a monster just yet.

We gave chase to the boss monster we originally intended to kill; my teammate gave the final blow and the team cheered at our victory. Loot for everyone!

My only reservation regarding Monster Hunter Tri at this point is whether or not the quick loading times are realistic approximations of what the real online play will be like for players.

The Capcom rep assured me that they aren’t using friend codes, and the online experience will be more close to what you would find on other systems. Then you have to consider that you have to purchase Hunter Credit making it more similar to an MMORPG business model for people who want to play online.

The Japanese version does not have any Wii Speak functionality, but apparently it will be in the North American version. Whether this will be restricted to lobby chatting or is included in-game remains to be seen, however.

I was assured that the single player experience would also be enjoyable, similar to how it was for other multiplayer-focused games like Phantasy Star Online.

Offline players will be happy to learn that player data can be stored on a Wii Remote, taken to a friend's house, and then used for play in the split-screen two player mode. In a time when split-screen versions of games are being phased out in favour of online-only games, I think certain people will be very pleased with this addition.

Monster Hunter Tri is scheduled for a March 2010 release in North America.

I sincerely hope the European release date isn't too far behind the North American launch. Although I've never experienced the Monster Hunter series for myself, the Wii instalment just keeps looking better every time I read updated impressions or watch a new trailer... and that's not just because of the breathtaking graphical accomplishment (it's impossible to make any excuses now, lazy devs). I feel like this is the sort of game where I could sit down to play, join an online party of hunters and suddenly, 8 hours have passed by. This will probably even be enough incentive for me to finally make the purchase on Wii Speak.

That save data on the Wiimote is a very nice touch. Now you can have your hunter on the go!

What do loading times have to do with online play?

That save data on the Wiimote is a very nice touch. Now you can have your hunter on the go!

Yep. Did this with my Mii for WiiSports one time, but it's just really not a much used feature at all.  Definitely good to see someone using what is there.

I don't think that's confirmed yet, Kazar. James did play the game at TGS, after all.

I don't think that's confirmed yet, Kazar. James did play the game at TGS, after all.

My apologies for jumping to conclusions. 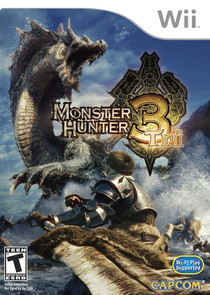