Break out your Proton Pack; it's time to join the Ghostbusters.

The Wii version of Ghostbusters: The Video Game features a very stylized, cartoony look and it runs on a modified version of the engine used for Red Fly Studios' previous effort, Mushroom Men: The Spore Wars. The game controls are relatively sound and simple, much like the overall level design. It uses an over-the-shoulder third-person view and the Wii Remote pointer is used heavily throughout the game to move the camera and aim your character's Proton Gun. You fire the gun by holding down the B button.

The level I played, reportedly the fourth level of the game, took place in the library that is famously haunted by Eleanor Witty, the Gray Lady. Accompanied by Ray Stantz (Dan Aykroyd) and Egon Spengler (Harold Ramis), you travel through the level to a confrontation with the library ghost.

Most puzzles in the game are solved by using Paragoggles, which reveals the spiritual world to the player. For example, at one point in the level I had to walk across a bridge that can only be seen while wearing the Paragoggles. You can also scan ghosts using the goggles much like the scan visor in the Metroid Prime series.

The lesser enemies of this level are made up of books and can be easily defeated by a zap of the Proton Gun. As you get farther in the level, you run into ghosts that you must attack, stun, and trap. After focusing your gun's stream onto the ghost for a while, he becomes weak and then, with a flick of the Nunchuk, you put them into a capture stream. Then, you have to point the Wii Remote in the various directions on the screen as the game informs you. Eventually, you'll receive the cue to slam the Wii Remote downwards, slamming the ghost into the ground. With a bowling motion, you use the Nunchuk to throw out a trap and then you must guide the ghost towards it. There was a steep learning curve with this in the demo, but I think that has to do with the fact that the level being shown was from a later level. Once I figured out how trapping is done, it was fun and easy.

You use the same method to trap Eleanor Witty in the final battle of the level. I dodged books as I fired my Proton Gun away at the library ghost until I caught her in a capture stream and trapped her. While this didn't wear thin in the demo, I hope that Red Fly Studios varies the ghost trapping as the game progresses, especially in boss fights.

In addition to all that, you also have a running monetary total of the damage you caused throughout each level. While it doesn't have much of an effect on the overall game, it is a fun little meta game.

Overall, the demo was a nice taste of the potential the Wii version has. The graphics were very appealing and the Wii-specific controls worked wonderfully after I figured them out. I am eager to check out the full version when it hits store on June 16, 2009.

Nice impressions. Sounds like a good game. Not sure though if I will get the Wii version or the Xbox 360 version.

Are you sure the damage won't affect your funding in the full game?

If the goggles do everything is there a reason to ever take them off?

I imagine the paragoggles are similar to the Metroid Prime visors or wolf sense in Twilight Princess. Yeah, they reveal new information, but they also make it much harder to see the environment under normal circumstances.

Sounds like this game really hinges on the variety of ghost battles and captures, as well as the balancing of the gesture controls.

Sounds like this game really hinges on the variety of ghost battles and captures, as well as the balancing of the gesture controls.

This. Is there any other info on the game we might know about? I stopped paying attention after it was announced that Wii would get a cartoon make-over, since I figured that meant they'd dumb down the game and threw wii owners a bone by adding multiplayer (and presumably minigame) so its the "party" game while the HD systems get the "real" game.

The only info i can think of is stuff that was rumoured, before the game was officially unveiled. Really, I'm just curious about how the game plays out: Is it level based or is there some sort of open world environment that you get to drive around in and maybe do some 'freelance' ghost busting outside?

Both the 360/PS3 version and the Wii version have linear levels with a hub (the firehouse).
This isn't a dumbed down "party" game.

TYP - you're correct. It's a pain in the ass to see when you're wearing the goggles.

I have a hard time seeing why I'd want this over the PC version...

I have a hard time seeing why I'd want this over the PC version...

That should be your title, or at least in your sig.

Now that Lindy's mellowed out a bit she feels she needs to pick up the slack, she's the new Official NWR Sony Fanboy(Girl).

Both the 360/PS3 version and the Wii version have linear levels with a hub (the firehouse).
This isn't a dumbed down "party" game.

When this was announced officialy, and shown off, there was aloooot of crap going around with whole hardcore vs casual shit and it was getting really sickening. I remember being excited that Ghostbusters might finally be unveiled, then it was... and wtf why does Wii version have big headed 'toon characters!? That was my reaction. I know the wii wouldn't look as pretty without the hi-def but they didn't even bother keeping the same art style and made the game look, what people would call, kid_die??

After all that I gave up on the game but these impressions sound pretty good. Still not sure if i like the linear levels though :(

Not even really considering it. I must have my stay puft marshmallow man in HD!

The uncanny valley scares me. 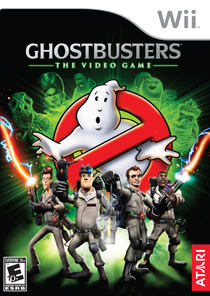