Notice: The original impressions of this game inadvertently included some erroneous information. These impressions have been corrected. We apologize for any confusion.

First thing’s first about comparing Zubo to Ouendan: It's not a game that's all about the music. It's an adventure game with a turn-based, RPG-style battle system that has music . It could be best described as a game made in the style of Pokemon, with different characters to find, collect, and use in battle.

The combat is turn-based, although it's odd that each turn consists of one and only one attack from each side. You have three characters in your party, you can attack opposition with only one character each turn. The same applies to the opposition. This means you can technically get away with using just one Zubo for the entire game, but realistically you're going to need to share the workload.

Each member of your party has four different moves to choose from, not unlike Pokemon. In fact, Zubo plays a lot like Pokemon in that every character in the game, be they Zubo or the evil Zombo, is sorted into a class that is weak or strong against other classes. There are 55 different Zubos to find, and each of them have their own personalities and abilities.

When initiating an attack during battles, an outline appears around your character, along with several larger outlines that begin to constrict toward the inner outline. This is just like Ouendan's constricting circles, except the “circle” in this case is shaped like your Zubo. By tapping on the touch screen as each outline meets up, you perform part of your attack. The more successful timed taps you perform, the stronger your attacks will be. It is difficult to follow exactly when you should tap the touch screen to initiate part of an attack, since the outlines of your character move with it, but the music can help you out with that. If you know the rhythm of the music you can get the most out of attacks, but concentration is required, regardless.

The adventure aspect outside of the battles is pretty standard fare, with touch screen puzzles and some environment activity. Since I spent the majority of my playtime in a battle, it's difficult to say for sure how varied the normal gameplay is. However, considering the game that Zubo looks to be inspired from, it's likely there will be things to do outside of walking from battle to battle.

Interesting ... I'm definitely going to keep an eye on this one. It had grabbed my attention when it was first announced, and it looks like it is shaping up to be as odd as it sounded.

Not really interested.  Combat doesn't sound more then frustrating to me. 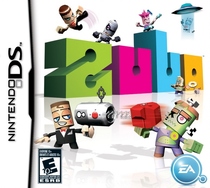