WarioWare: Smooth Moves is the perfect game to show off the different ways that the Wii controller can be used. Just like the previous games in the series, players are presented with 5 second microgames that must be completed to progress. However, in this iteration, players are directed on how they must hold the Wii remote before each game. Each method is given a descriptive and sometimes humorous name. In total, there are 17 different ways of holding the controller, some requiring full-body motions in order to perform properly. As such, the “how to hold the remote with the wriststrap on" screen that was present in most of the other demos didn’t make a lot of sense here.

At E3, there were a bunch of microgames playable, and all of them wouldn’t come up on a single play through. Here is a list of some of the wacky microgames I saw:

Most of the microgames were easy to complete, though rolling a ball into a small hole (like the cheap kids games using BBs) and balancing on a ball were a little tricky. After losing too many times or completing a certain number of games, the demo ended. WarioWare: Smooth Moves is sure to be a blast, especially at parties, and does require more physical activity than most of the games shown. Expect the extreme weirdness present in the previous WarioWare games to be found here.

I hope this is available at launch. Me wantee!

I don't really see any reason for it not to be. I imagine this was one of the earliest games in development, with the very first Revolution teaser trailer probably representing some of the microgames.

I thought I read that it will be a launch game. I hope so because it looks interesting, although i'm not sure how many people will have the full experience of the game by actually doing the moves the way Nintendo intends them too.

I don't see myself getting this, but I DO see some friends getting this, so I have no doubts that there will be Warioware MAYHEM at some parties soon enough. That's where it's all at.
Looking forward to this.

I have a love/hate relationship with WarioWare. One one hand, WarioWare games are always a blast. But on the other hand, they're responsible for Wario's current inane Village People outfit.

Actually, the launch titles for Wii are going to necessitate I take it around to all my friends (a lot of them adults with children) to show exactly how new and exciting Nintendo gaming is. This game is one that stands out, as is Wii Sports. With Metroid and Trauma Center as back up (haha), this launch is looking killer. 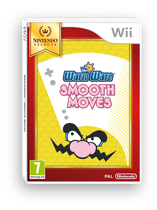