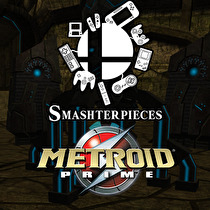 In the reaches of space, below the surface of planet Plagiarism, Joe and Matt faced video games. They destroyed their operation, wiped out the parasites called gamers, and defeated Mother Brain. But the games were far from finished… Because they still have like 40 of them left on their list.

Presented by Anonymous Dinosaur and Nintendo World Report, this is Smashterpieces - a casual walk through the history of the Super Smash Bros. Ultimate Roster. On this show, hosts Joe DeVader and Matt Zawodniak are playing one game for every fighter in the newest Super Smash Bros. game, from 1984's Duck Hunt to 2019's Fire Emblem: Three Houses. Each game will be live-streamed by both of us, and then we'll convene to talk about it on the podcast.

One of those games is Smashterpiece #41: Metroid Prime, one of the very few first-person shooters on our list. No matter how much we try, the games remain, so at least this time we’ve dragged another into this pit with us. Joining us this week to talk about lava worms and chozo ghosts and 3D maps and statistically probably some kind of metroid is George Hyde AKA SuperDQP! How do we feel about the various areas of Tallon IV? How successful is this game’s exploration based design when compared to the 2D games in the series? What the hell does it mean when somebody says they wish Samus could wear different heads? All this and more in today’s episode!

Join us next time as we sail the open seas to save our sister in Smashterpieces #42: The Legend of Zelda: The Wind Waker

You can find previous episodes at Anonymous Dinosaur's website!

You can watch Matt and Joe stream these games on the NWR Twitch channel!

Editing for this episode was assisted by Peter Spezia.