Here's the unbridled insanity of character design you're missing if you've skipped out on Nintendo's Mario Kart mobile game. 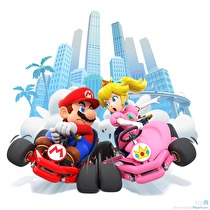 A lot of people might be lamenting that there hasn’t been a brand new Mario Kart game since 2014, but those people would be wrong. Sure, Mario Kart Tour, the 2019 mobile game from Nintendo, might not be the bold sequel that a prospective Mario Kart 9 might be, but it’s very much a new entry in Nintendo’s venerable franchise. It’s not everyone’s cup of tea, as is the way of Nintendo mobile games, but for the folks who play it, which include yours truly, Mario Kart Tour is a very enjoyable adaptation of Mario’s racing series on mobile devices.

The best part might be the absurd new racers. For better or worse, Mario Kart Tour is heavily based around collecting numerous racers, karts, and gliders, typically in a gacha-style mechanic that requires currency. Just playing the game without real-world cash will typically give you enough to fill out your crew, but yes, there is the option to spend your dollars and cents on gems to pull racers. If you’re curious about the best method for getting more racers, I’d recommend the $5/month subscription. Or don’t get it if you don’t want to. Either way’s fine with me. Just like, play Mario Kart Tour if you think it’s fun. Or don’t.

But returning the topic at hand: the racers. They’re ridiculous. There are new characters making their Mario Kart debuts entirely, such as Pauline and Peachette, but most of them are tried-and-true Mario characters dressed up with special abilities. Mario rocks a musician outfit. Rosalina got ready for Halloween by dressing like a witch. Baby Peach was a little cupid for Valentine’s Day. It’s funny and cute and adorable.

I decided to rank my top 5 new Mario Kart Tour racers, not based on tier lists or racing quality, but based on amusement. So let’s-a go. 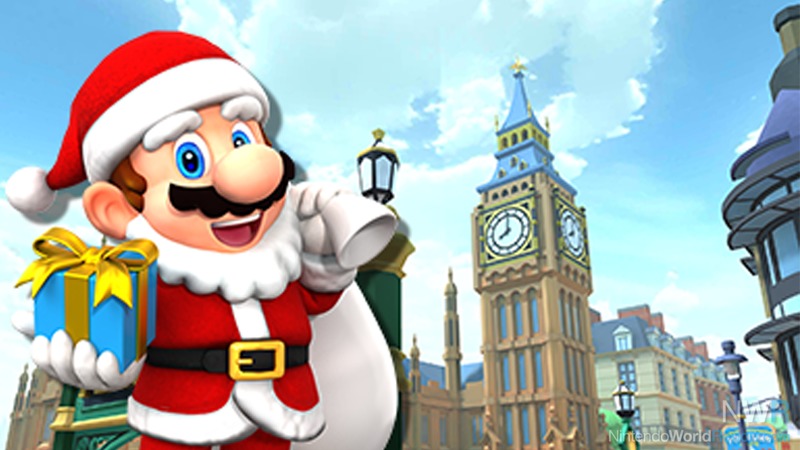 For the Christmas season, Nintendo introduced Santa Mario. At first, it’s just Mario in a Santa outfit, but like, what the heck—his mustache is still black? But his eyebrows are white? Why?!?

The why is probably that Nintendo’s character style guide requires Mario to always have his trademark noise tickler, but it’s jarring nonetheless. He’s definitely a festive treat, though. He’s got a Fire Flower power-up, which is novel, and he pairs well with Reindeer Yoshi, who, well, he’s Yoshi with reindeer antlers. I actually have that as a Christmas ornament. I can only hope Santa Mario leads to some Rankin Bass-esque chicanery in the future. I would like a stop-motion Mario singing at me about putting one foot in front of the other. Maybe that can be the new Mario movie? 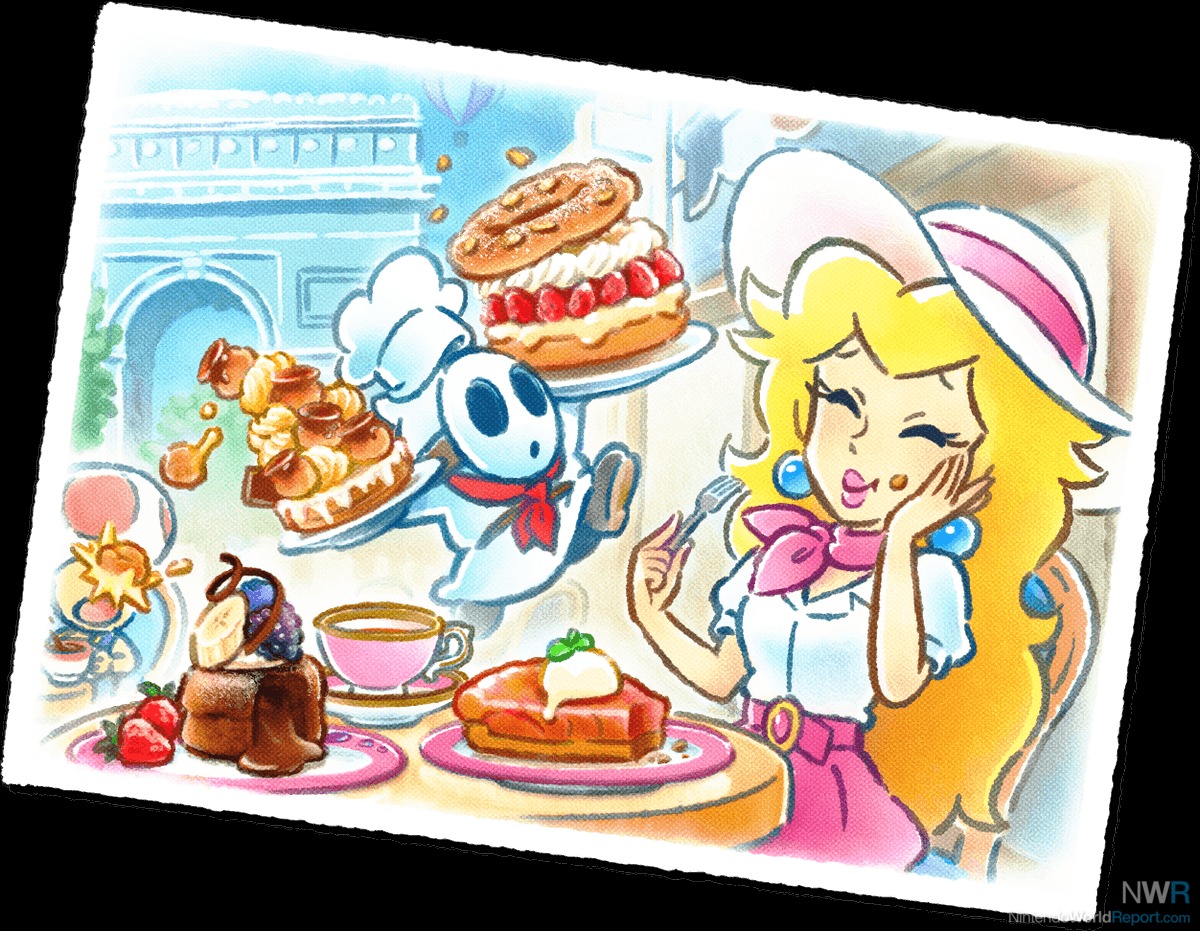 When I think Parisian cuisine, I think Shy Guy. Well I don’t, but Nintendo does apparently. Showing up in the Paris Tour, this little fella is ready to make you a tasty croissant. His power-up is a mushroom cannon, which probably is helpful when making specific dishes but I don’t think I’d want speed-boosting mushrooms in my pastries.

In my head canon, I’d like to think Chef Guy here is gearing up for his next appearance in a future Paper Mario game, where he teams up with Gourmet Guy to make some delicious food, potentially in some sort of side quest. I also wonder what other Mario enemies could be turned into cooks. I’m holding out for Fry Cook Wario or Food Truck Roy Koopa. 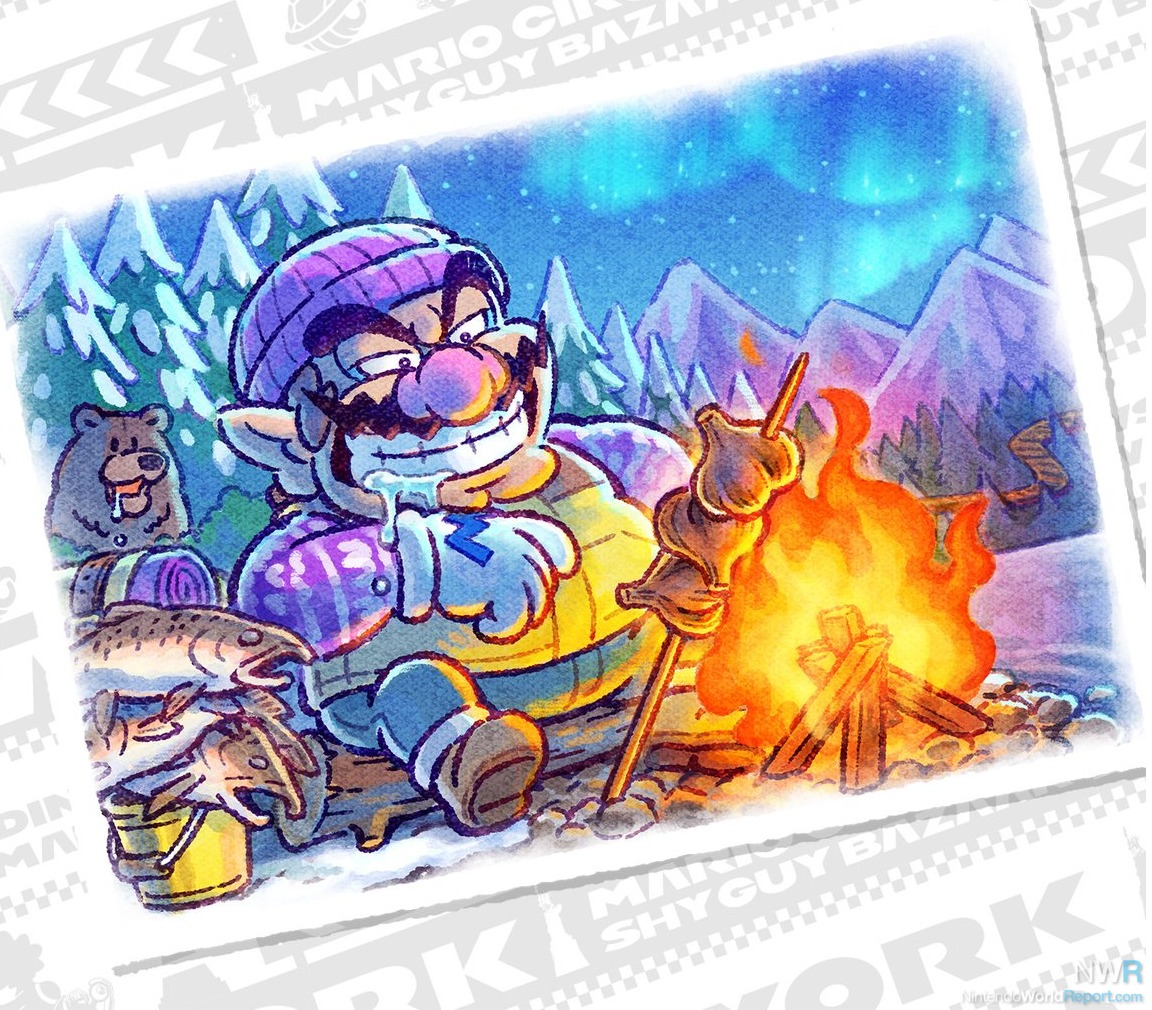 While Wario’s fry cooking days are hopefully ahead of him, recently he dabbled in some Canadian adventuring as Hiker Wario was a part of the Vancouver Tour. He’s all bundled up for a few days of camping. He got his bedroll. A stylish lantern. A cozy sweater underneath his warm vest parka.

We’ve seen Wario as a biker, but this is the first time we’ve seen him as a hiker. I’d like to think Wario went out on his own after hitting Whistler with some bros. Who those bros are, I truthfully don’t know. Waluigi seems like he’d break in half trying to snowboard. Does Wario really have friends? Maybe Wario actually started hiking to try to meet some new pals. I hope he’s doing okay. Give him another Wario Land, but instead of looking for money, maybe he can look for *friendship*. 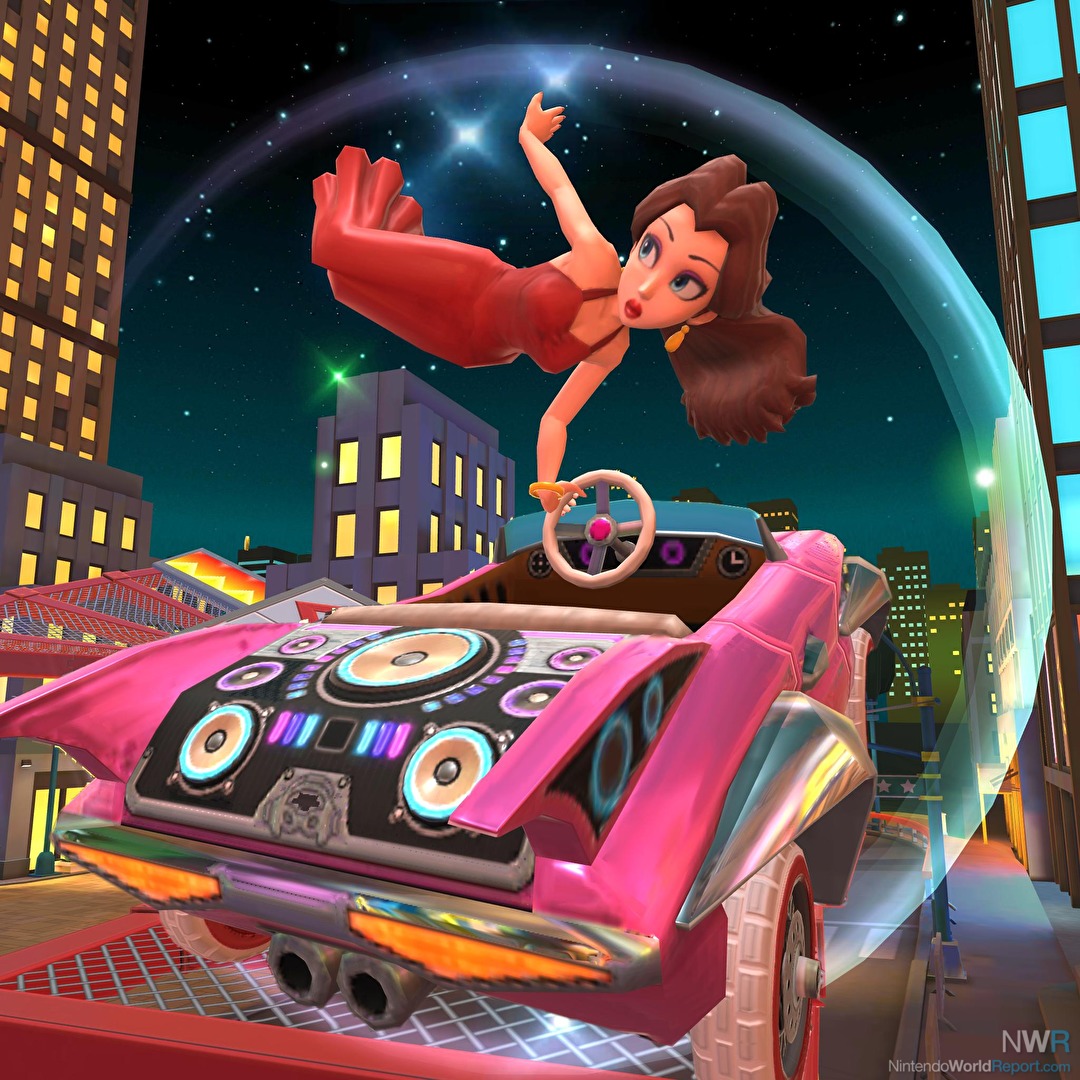 Mario Kart Tour debuted with one of the best new racer additions: Pauline. After her glorious return in Super Mario Odyssey, Pauline started racing in the very first tour after Mario Kart Tour’s September 2019 launch. She also owns one of the best special items in the whole game: the Lucky Seven, which spawns seven items that are fired off with the press of a button. Getting a frenzy with that item rules.

Pauline got a revision to close out 2019 as Party Time Pauline. She’s ready to go on an odyssey to see the ball drop at New Donk City. Or maybe it’s a barrel? Can we get more New Donk City lore, please? Like where is Donkey Kong in all of this? Was he a past mayor? Did the Kongs get exiled to an island after the events in the arcade game? Were the Kongs there first? Is the New Donk City celebration just like Thanksgiving? Makes ya think.

Hopefully this isn’t the last we’ve seen of Pauline in the modern Mario canon. After her role in Odyssey, she also popped up as DLC in Mario Tennis Aces. Maybe in whatever Mario games are next, Pauline will be playable in some capacity. 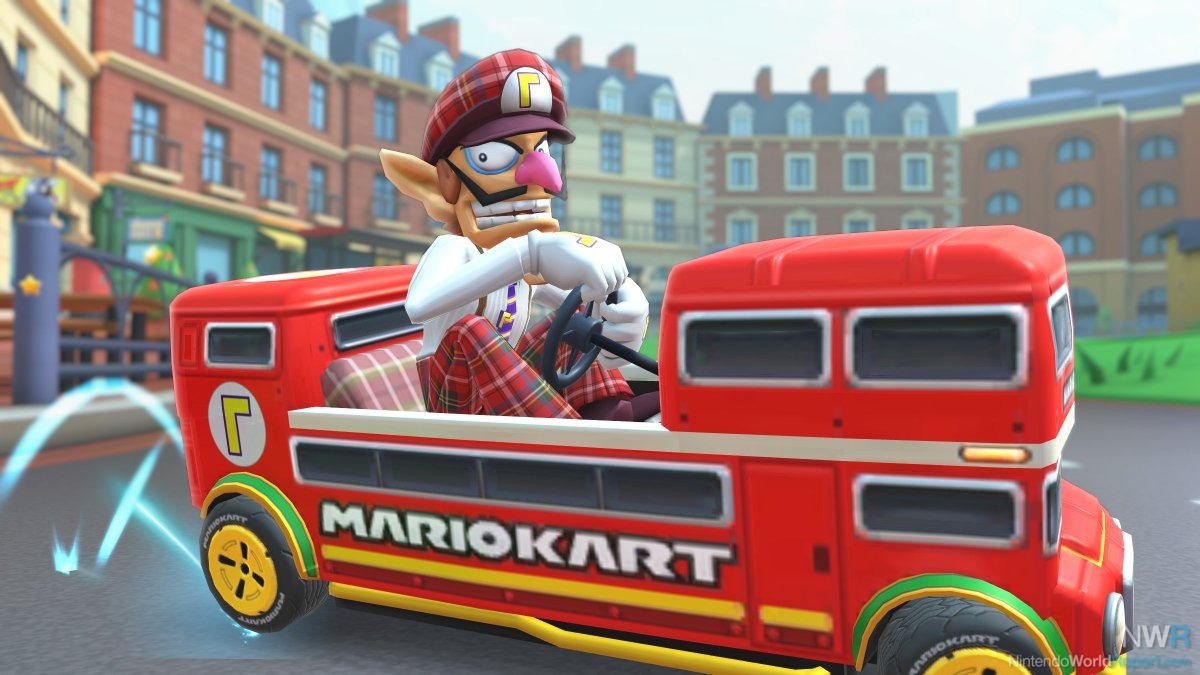 Waluigi might never be playable in Super Smash Bros., but this spinoff maven made a strong bid to win our hearts and minds with his Mario Kart Tour appearance. He first showed up in his normal purple form around Halloween, but his role as a bus driver during the London Tour was legendary. He left his purple threads behind, replacing it with a plaid aesthetic. His trademark hat? Plaid. Pants? Plaid. Homeboy is also wearing suspenders and a tie. He is just waiting to drive you around in a double-decker bus in style.

But the best part? Start a race with the bus-driving weirdo. Charles Martinet graces us with a new line of Waluigi dialogue. He bellows “all aboard” like the demonic spindly gremlin he is. No one wants to ride that bus, Waluigi. You’re weird. But dang it, you’re the best new character in Mario Kart Tour. Not by tier lists, not by quality, but by sheer stupidity.

Please Nintendo, grace us with more absurdist variants that delight and shock. Give us Hockey Goon Wario, Presidential Primary Pauline, and Ziggy Stardust Rosalina. Just go for it in full force, Nintendo!