The NES Encyclopedia: Every Game Released for the Nintendo Entertainment System (Book) Review 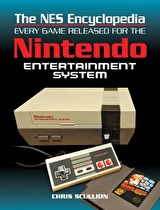 Whatever your personal experience with the console, there’s no denying the importance of the Nintendo Entertainment System in the history of video games. You may be surprised to know that counting both licensed and unlicensed games, the total number of titles in the system’s library was 876, and that’s how many are included in The NES Encyclopedia: Every Game Released for the Nintendo Entertainment System by writer and games journalist Chris Scullion.

The book begins with an interesting foreword, introduction, and brief history of the NES before diving straight into entries for over 700 licensed games. Presented in alphabetical order, most game entries include a screenshot, release and publication information, a blurb of between 100 and 120 words, and a fun fact, with four games on a single page. Some of the more important or better known titles like Super Mario Bros. 2 or Adventures of Lolo take up half a page or a full page that includes the front box art. An index at the back of the book allows you to look up games by title as well. As a resource that one might use to look up particular NES games, the The NES Encyclopedia works quite well, but the alphabetical order rather than chronological makes it a little less appealing as a book you would simply read from beginning to end. I enjoyed it the most when I would just randomly open up to a new page and look over a dozen or so games before putting it down. The section on unlicensed games that closes out the book is particularly fascinating, and it’s definitely a part of the NES line up that I was much less familiar with.

Without question, The NES Encyclopedia is teeming with knowledge, and the write-ups for each game are informative and entertaining. The writing itself is accessible and inviting to readers who have experience with these NES games but also those less familiar. The pages of the hardcover version are quite thick and easy to flip, but the cover itself is a little on the plain side. The images used inside the book are of a high quality, which adds to the visual appeal of the book's white, well-organized pages.

Overall, I found The NES Encyclopedia: Every Game Released for the Nintendo Entertainment System to be an informative book that fans of video game history, and the NES in particular, should take a look at. I wouldn’t recommend it to those who are looking for something to read from start to finish since the way the book is organized necessarily really lend itself to that. Instead, it’s a wonderful resource for looking up specific games or series that you want to know more about or perhaps bring up on a podcast. As someone who was just old enough to have and spend time with the NES, I really enjoyed flipping through The NES Encyclopedia and remembering games that I may have rented only once or stared longingly at when my parents took me shopping. Scullion’s book is certain to conjure up nostalgia for anyone with fond memories of Nintendo’s first home console, and it’s just as likely to teach you a few new things in the process.

>Presented in alphabetical order, most game entries include release information

What does the book say for the release date for Super Mario Bros.?  Because if it isn't well documented, then I ain't buying. 🤣