I'd like to be under the sea in Mr. Tako's garden in the shade.

If you readers aren't familiar with Save Me, Mr. Tako!, I suggest you do so. The game puts you in the role of a kind-hearted octopus named Mr. Tako who tries to end a cephalopod-human conflict by being helpful, solving problems, and carrying a message of peace (reminds me a bit of Yono and the Celestial Elephants). We just learned that the game is coming out on October 30th, which is exciting as I've been eagerly anticipating its release. Although it's a Switch game, developer Christophe Galati has lovingly recreated the look, feel, and sounds of my old brick Game Boy, although there are Super Game Boy-style enhancements along the way. Our own Jordan Rudek checked out a short demo at PAX West and came away wanting more. The game is essentially Metroidlike with dungeons and puzzles and oozes inky charm. 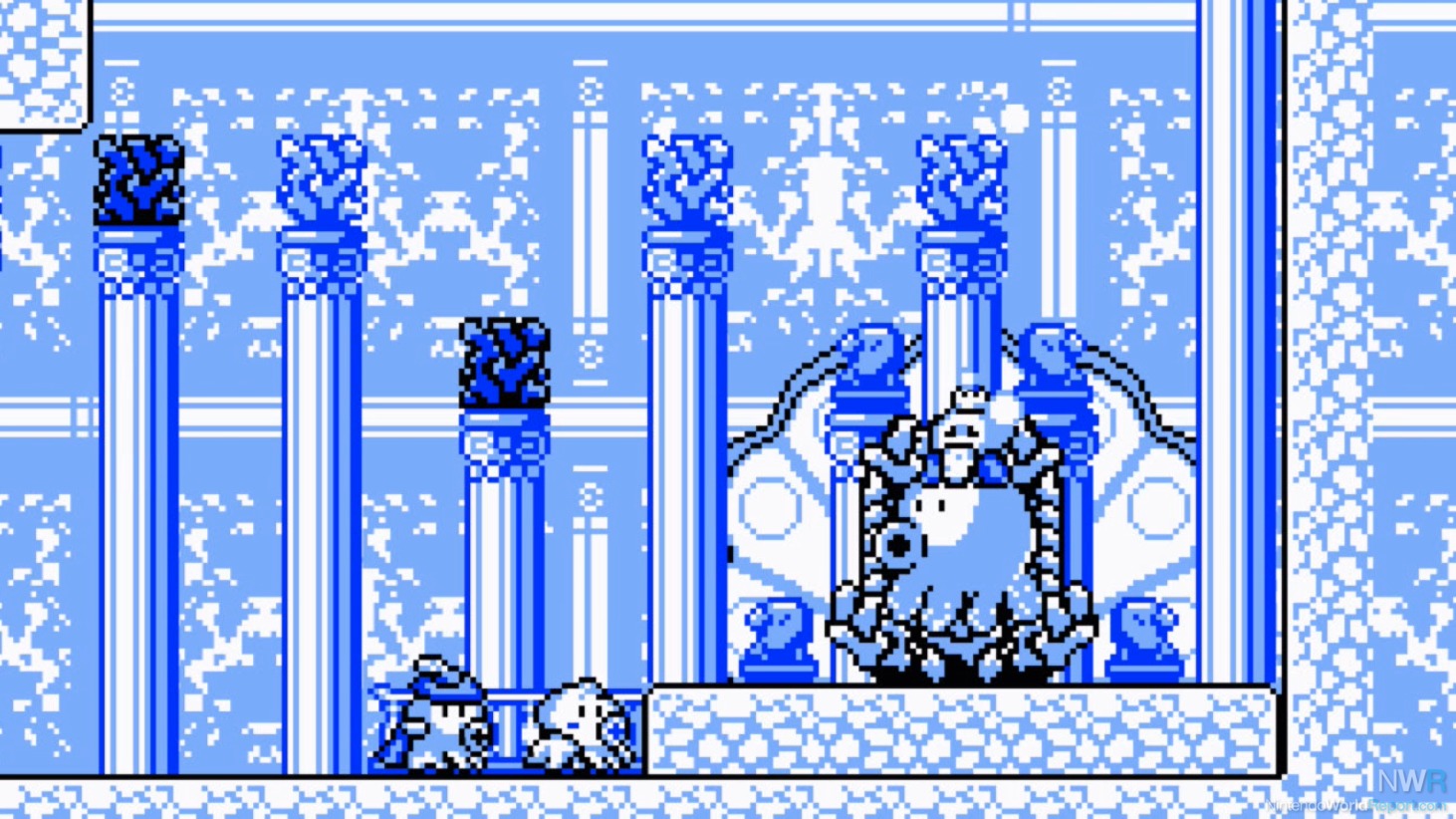 We recently got a chance to interview Mr. Galati, and I leaped at the chance.

I'm happy that developers are starting to realize the appeal of the good old Game Boy. 13AM Games recently did Pirate Pop Plus and now you have Mr. Tako. It's a trend I hope to see continue. What made you decide to build Mr. Tako with the GB in mind as opposed to something like the NES or SNES?

I hope it will become a trend too! We saw a big wave of NES-inspired games following the success of Shovel Knight, but not many recent Game Boy style games aside from game jams.

I grew up playing the Game Boy and was always drawn to those retro style games and the look of the graphics. Many of the games I played had a magical feel to them, which seemed to be achieved by the cute aesthetic and the room that they left to allow for player’s imaginations to take over. When I made the decision to create Save me Mr Tako! back in 2014, it was the year of Game Boy’s 25th anniversary, so it seemed like the right time to start working on this kind of project.

You've said in previous interviews that Mr. Tako is an amalgamation of concepts from games you've loved. I definitely see elements of Zelda, Kirby, Metroid, and Wario Land, although those games also share a lot of DNA. We're there any particular games you drew inspiration from?

When I first started to design the game, I thought about all the Game Boy games that I loved to play, and then honed in on what specifically I loved about them. I tried to select certain elements, mix them up a bit and turn them into something that still felt fresh and new. 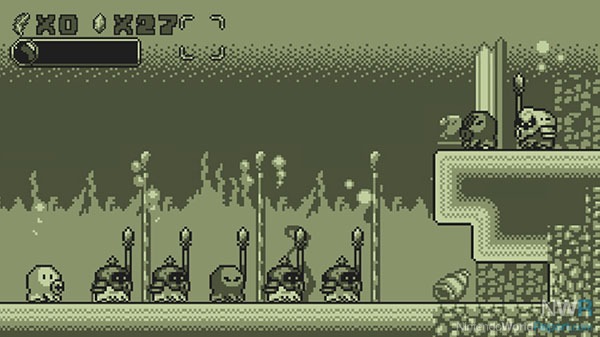 As you mentioned, Kirby is one of the main areas of inspirations in this game, with how the world/level hub works and also the power hat system. Zelda: Link’s Awakening inspired the game opening, the dungeons and a lot of the powers, too. The “attack” feature of inking the enemies to turn them into platforms is inspired by Metroid II. Castlevania inspired a lot of the powers, and the core gameplay has some nods to Mario.

For the story, games like Final Fantasy VI, Kaeru no Tame ni Kane wa Naru and Seiken Densetsu were my main inspirations, I also added references to pop culture and history. Save me Mr Tako! is mostly inspired by many different Nintendo or JRPG titles, but also by recent indie games. (You might see some cameos!) There are tons of other references and easter eggs hidden in the game, so I hope players will find them all!

Mr. Tako has been in development for quite awhile; what elements have changed from the beginning to now, or did you always have a clear picture in your head of what Mr. Tako would be?

I’ve been working on Save me Mr Tako! for four years now, with the help of the game’s music composer Marc-Antoine Archier. I had a strong vision for how the story would go since the very beginning, but I started slowly using a demo prototype, which was essentially a side-scrolling runner. I received a lot of feedback at that point and it motivated me to begin creating the full story mode that I had envisioned. I completed the story mode with new ideas, I re-coded and improved the gameplay prototype, and then spent the rest of the time polishing the content.

When I partnered with Nicalis three years later, they helped me adjust the difficulty levels and add extra features like the widescreen mode and the Super Game Boy styled background. Although I’ve been working on the game for a long time now, I’m really proud that I was able to stay focused and deliver the story mode that I wanted, in addition to all of the other content that I envisioned and more! Some details have changed from the original concept, but the overall message has always stayed the same. 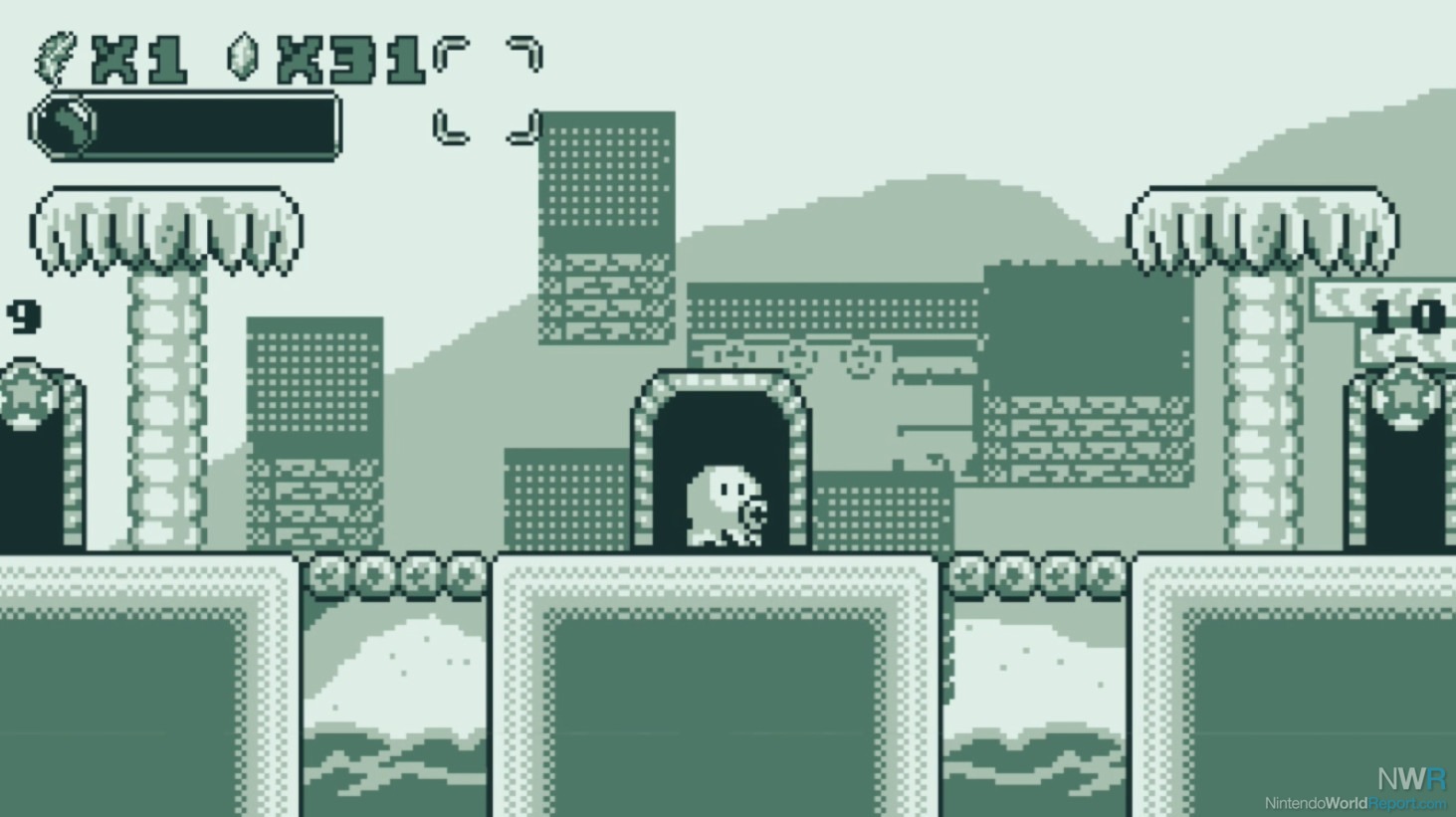 Is it difficult to let the project go out into the wild as you get closer to the release?

I wish the game was out already, ahah! I finished the content a while back, and this year has mostly been spent testing, debugging and polishing. As mentioned previously, we did recently add a couple of new features like an Easy Mode and also a cutscene fast-forward option. Very soon, it’ll be time for my baby octopus to be released to the wild and for Tako-San to swim on his own!

Nicalis has been one of, if not THE, most supportive indie publisher on Switch. How did you find your way to them? Or did they find their way to you?

When I released a demo of the game back in 2014, I also sent it to Nicalis and asked them for their feedback since I loved Cave Story so much. They answered me, and told me to keep in touch with them regarding the progress of the game’s development. So, when I had updates that I wanted to share, I would send them GIFs of the game so that they could see the direction I was headed and what was new. When I got selected to show Save me Mr Tako! at Tokyo Game Show in 2016, I had an opportunity to meet with Nicalis there and we started talking about publishing the game on the Switch. We later signed our contract and have been working on the Switch version ever since.

I'm always curious about how developers felt about working with the Wii U vs. Switch. I know Mr. Tako started life as a Wii U game, but how far did it get? Was the "switch" to Switch a welcome one?

It was always my main goal to release the game on a Nintendo console. As soon as I could, I applied to the Nintendo developer portal and became an approved Wii U developer. Since Tako was my first game as an independent developer, they didn’t grant me access to the 3DS program. I started to post about the game on the developer forum and received some good feedback, but I never ordered a devkit or started working on the port, as I was still creating the content in the game. So, when the Switch arrived, it was a more than welcome change. Nicalis took care of the porting process, so I could focus on finishing the game content.

Wow...it’s very hard to choose just one, as there are 50 different hats in the game! If I had to pick one, I would probably say the Takoyaki Master Hat, which allows Tako-San to turn enemies into takoyaki (fried octopus)! There are so many other great hats and abilities in the game, though, so I can’t wait to see which ones other players like the best.