This May, Fire Emblem Echoes: Shadows of Valentia released on 3DS, giving players a new way to experience Fire Emblem Gaiden, the famous (or infamous) second game in the Fire Emblem series. Daan Koopman gave the game a 9, saying, "Fire Emblem Echoes changes enough to make you play the game differently while retaining most of the key aspects of what makes the series so great."

We’ve gathered three NWR staffers to get their thoughts on this latest remake. 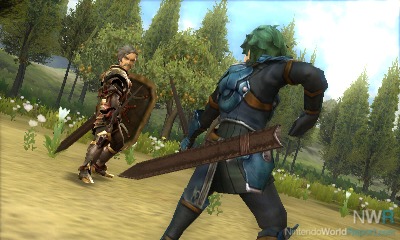 Neal Ronaghan, Director: It took me a while to come around to even playing Fire Emblem Echoes. I didn't enjoy the Birthright portion of Fates, and the only salve after that was the light fun I had with Fire Emblem Heroes on mobile. Thinking positively on the series after Heroes, I picked up Echoes and was, at first, summarily blown away. After a mildly sluggish start, the story kicked off into high gear, with intrigue billowing out of Alm and Celica's childhood friendship.

The main setup of splitting up the two heroes into different parties and stories helps keep the entire adventure fresh through the majority. That was helped even more by the new dungeon exploration segments. Echoes feels like a rearranged version of what has become typical Fire Emblem, owing most of those peculiar changes back to the original NES release of this remake. It all worked so well for me until it didn't. In the final areas, the maps are overly reliant on environmental damage, which often makes battles a slow and laborious war of attrition. To top it all off, the final dungeon area is punishing and long as well. Echoes is still fantastic for what it does the majority of the time, but the ending areas were a bitter pill to swallow. The finale took what probably would have been my favorite Fire Emblem game to date and transformed it into something I likely will never revisit, even though I really enjoyed most of the adventure.

Casey Gibson, Associate Editor: The announcement and release of Fire Emblem Echoes failed to excite me like previous installments always had. I knew it’d be a game I would play, but after completing Awakening and all three branches of Fates, I was starting to feel a bit fatigued. However, when I sank my teeth into Echoes, my lack of enthusiasm did a complete 180. Long gone are the days of waifus and crazy shenanigans where you can have a child one day, only to have them on the battlefield alongside you the next. Instead, Echoes reverts back to the series roots while adding in some new wrinkles, proving to be the shot in the arm the series needed.

The major element resurfacing for the first time since Gaiden's originally release in 1992 is dungeon crawling. Here, you’ll explore caves and caverns in a third-person perspective to find treasures and secrets, while more importantly, taking out enemies. Upon engaging them, you’ll be dropped into a small battlefield with the task of eliminating all that stand in your way, and doing so rewards you with a bounty of experience. The varied gameplay helps keep the 20+ hour adventure fresh throughout, with a nice mix of traditional battles, exploration, and an engaging story filled with a wonderful cast of characters.

Intelligent Systems didn’t leave a single stone unturned when it came to the game's presentation. Echoes is almost entirely voice acted, and the 3D visuals look second-to-none. It’s apparent how much love and care went into the reimagining of this 25-year-old game. What this all results in is, without a doubt, my favorite entry on the 3DS, and an easy recommendation for both veterans and newcomers alike.

Donald Theriault, News Editor: As is befitting of a game with its roots on the Famicom, Shadows of Valentia is tricky even on Normal difficulty. There is one way to get around it, but it involves grinding. Lots of grinding. More grinding than I did in an “everyone marries” run of Fire Emblem Fates: Revelations last year (which ended near 50 hours), and without as much character development. The concept of two parties with different combat focuses was neat, and I wouldn’t mind seeing it repeated in a future game that also includes elements like the weapon triangle. Shadows forewent the anime art style of the previous 3DS entries for a more European style, which worked for me until the more fantastical elements came into the game later on. The soundtrack isn’t as memorable as Fates or especially Awakening, and I found myself treating it as a podcast game most of the time. My chief concern with the game is a typical RPG problem, but made worse; the endgame dungeons are 50% too long. If they were shortened a bit, or if more opportunities to save/recover/heal were offered, then Shadows could be an all-timer. Instead, it’s a great game, but the third-best Fire Emblem game readily available on the 3DS.

I would agree that, overall, the music in Shadows of Valentia isn't on par with Awakening and Fates (though I prefer the latter's soundtrack). I think the endgame music in this game is definitely as memorable as those two games though. The battle themes for Alm and Celica in Act 4 are amazing:

As far as the endgame dungeons go, I didn't think length was the problem more than the lack of a second save point. They're the final dungeons, so they ought to be difficult and take you a while to get through, but one save room just isn't enough (especially since it's right at the beginning of Celica's, and you can totally miss it the first time and go straight to the battle with Berkut without saving in Alm's).

In any case, I'm glad to hear that a lot of people on the NWR staff greatly enjoyed Shadows of Valentia. Even though Nintendo marketed it as such from the very beginning, it was a surprise to me just how different this entry was to other Fire Emblem games, but I ended up loving it as well. I kind of hope this is the path Fire Emblem takes now: the new mainline entries largely evolve from Awakening, while we also we get these remakes of older Fire Emblem games under the "Echoes" banner which are handled with great care and respect the spirit of the original games in between.