Staff Sez: What's in a Name?

A recent beloved Nintendo character's full name has been revealed after over 20 years of secrecy. What does the NWR Staff think of the whole ordeal? 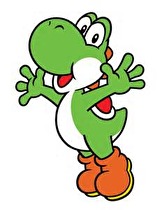 For decades we have known Mario's multicolored dinosaur friend by one name, Yoshi. Simple, right? Well, recent Nintendo documents from 1993 have uncovered the truth regarding one "Yoshi". In short, it isn't his full name! Yoshi's real name is T. Yoshisaur Munchakoopas. So I decided to ask our staff the following question:

"What do you all think of Mr. Munchakoopas full name? Looking for your general thoughts on the matter and if it's relevant at all to future Yoshi titles, or if you think Nintendo will even address it at all.

Zachary Miller: My initial thought is that it doesn't conform to traditional species binomials at all. The "T." at the front implies a larger (unknown) genus, and "Yoshisaur" is the species, and "Munchakoopas" is a subspecies. But you don't capitalize species or subspecies names.

Neal Ronaghan: I think Mr. (or is it Ms.?) Munchakoopas' full name proves how good of a showman he is. Much like Munchakoopas' close friend Cherilyn Sarkisian (known to most as Cher), he decided to shorten his name for show business. And it worked. He's had a whole island named after him. He has had a story all about him and his friends. He had a Touch and Go and a Topsy Turvy. None of that would have happened if he went by his full name.

Aaron Brown: It's an interesting tidbit that I might never forget, and makes for a good trivia question. But honestly, in my mind, it doesn't matter all that much. That green little dude will always just be Yoshi to me.

Bryan Rose: It is interesting that Mr. Munchakoopas real name has been brought forth onto us after years of misleading information. What else has Nintendo been hiding from us? In all seriousness though, I doubt much will come from it. Nintendo hasn't even commented on it publicly, so they see it as less of an issue. I think those documents that leaked out were pretty cool, though. The Mario series never needed that much of a story. The real story was playing through the levels and eventually thwarting Bowser and rescuing Princess Peach. These manuals that tried to add a bit to the overall story are fun, and even kind of silly in a sesne. In the end though, it just reminds me of simpler times that I can look back upon and smile at.

Andrew Brown: Oddly enough, I think I recall reading something like this in a Nintendo magazine or activity book back in my childhood, but I merely disregarded it as an unofficial joke. I doubt Nintendo would push to have this mentioned in any games in the future, as we've seen plenty of changes made to other characters since the 90s. Back in those days, Bowser was just called King Koopa, Peach was Princess Toadstool, Birdo was a guy and Iggy Koopa had a rainbow mohawk.

I heard it's something entirely different in the original Japanese.

I just figured it was a joke some NoA intern came up with that's gotten out of hand 21 years later.