Check out Nintendo swag from E3, Smash-Fest, and more. 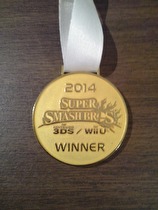 This week I show off the cool Nintendo swag I managed to pick up at E3, the Super Smash Bros. Invitational Tournament, and the Smash-Fest event at Best Buy. Most of it is, shockingly, Super Smash Bros. related. I say shockingly because until these events there hasn't been much Smash Bros. merchandise. Enjoy!