Square Enix is the master of releasing RPGs on the eShop...in Japan. 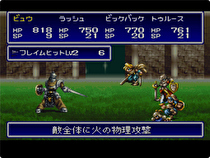 While it definitely doesn’t feel the same it in the West, Square Enix has been a huge supporter of both the Nintendo 3DS and Wii U eShops in Japan. This week is no different as the company released the Japan only Bahamut Lagoon on the Wii U Virtual Console, a strategy game from 1996 on the Super Famicom. Aside from being made up of the standard strategy RPG staples, Bahamut Lagoon also features the ability to raise and battle dragons alongside your other team members. On top of this niche Super Famicom game that you've probably never heard of, Dragon Quest Monsters 2 is set to hit the service on 3DS and Sega is also double dropping Puyo Puyo Tetris on both the 3DS and Wii U. There are some exciting games out there this week. For a full look be sure to check out everything below!