Nintendo sure have given Luigi one heck of a year, and the last big Mario game to get a release during the series' 30th anniversary delivers one final send-off for the bro in green.

It's unlikely that those of you who played New Super Luigi U have forgotten already, but for those who didn't know, every level in the DLC add-on featured a hidden piece of Luigi art. Sometimes it was an 8-bit sprite hidden amongst castle bricks, sometimes it was a Luigi-shaped topiary in a flowery garden. Super Mario 3D World has continued this trend with a slew of hidden Luigis scattered around the game. They all seem to be simple 8-bit sprites based on his original NES look this time around, though some of them are animated, some can only be seen when certain conditions are met, and some of them are extremely difficult to find. One level even features a tiny Luigi flitting around in the breeze amongst a cluster of scattered leaves, the only way to see it is to have the camera in precisely the right position at the right time as the leaves blow past. 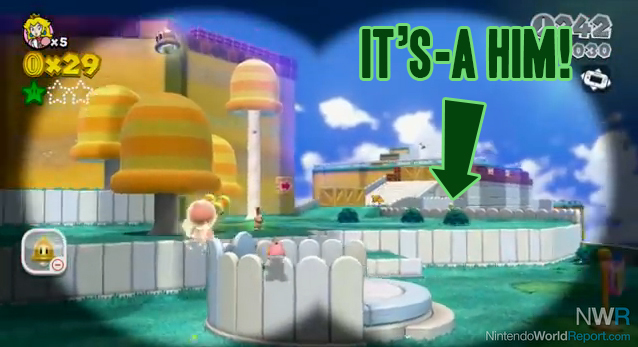 You'd be forgiven for missing the tiny guy, he's hard to spot!

At this point in time I can't confirm whether there's a hidden Luigi in every level or simply a lot of them. Personally I'm convinced that I'm simply not looking hard enough, so I'm going to put it to you, dear readers, to help me search!

To get the ball rolling, I'm going to list three Luigis I've found in the first world of the game.

After dropping out of the clear pipe near the halfway point, you can visit a Sprixie with a pair of binoculars who show you the direction of the goal. In this binocular view, it's possible to make out a tiny Luigi peeking over the fence across the yard to the right of the screen. He can only be seen from this angle and disappears when you leave the Sprixie's podium!

Right at the start of the level, before you drop down the Pipe, swing the camera angle around to the right and look out over the cliff. You can see a Luigi doing a crouching dance on the back wall to the bottom-right. Whether this is a tongue-in-cheek nod to the Japanese niconico “Kintamario” meme is up to interpretation, but if it is that's a pretty ballsy move for Nintendo. Pun so intended.

Isn't Bowser's car the most awesome thing ever? Anyway, after the stack of Goombas near the end of the stage the path will turn away from the camera and you'll be forced to kick some soccer-ball bombs into a breakable wall in order to proceed to the boss fight arena. As you pass this breakable wall, a gigantic Luigi will swim across the moat in the background from behind the castle pillars on the left.

That's all the hints I'll give for now. Keep your eyes peeled and be sure to chime in with sightings of your own in the Talk Back thread below. Happy hunting!

I'll keep alert. Wish I saw this sooner as I know I found a few others along the way.

So... I know I've seen a few of these, but there's only one I remember well enough to give details. In World 3, the setting for the climactic stage is a couple of trains running on parallel tracks. The level is called Bullet Bill Express, I think. When you reach the front of the Bowser train, there's a little platform slightly past the warp pipe that takes you to the final battle (I hope I'm remembering this correctly). If you stand on the platform, the view shifts to a more isometric one in which the fronts of both trains are visible. On the track parallel to the Bowser train is a Bullet Bill one, and running in front of that train is a small 8-bit Luigi. It's small, but you'll see it near the right hand side of the screen.
Also... I remember seeing one in one of those houses in which Sprixies give you a stamp. You know how there are windows in those houses with a nice view? I saw a little Luigi peeking into the house through that window...

when i was hitting lucky blocks,a luigi comed out (world star-2)