The man with no arms carries the Wii U on his back. 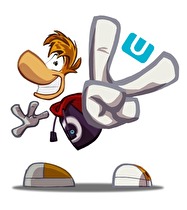 This week Rayman Legends visits the restaurant that is Nintendo systems with a party of one. With no other games scheduled to hit retail locations, Ubisoft has become a lone wolf in the Nintendo market. Here are this week's releases.

Originally intended to be a Wii U exclusive, Rayman Legends was pushed back in order to bring it to other consoles. After the initial leaked trailer, Nintendo fans have been clamoring to get their filthy Mario gloves over the title. Now it's finally here, and apparently very good. Our own Scott Thompson has reviewed the game and given it high marks. Though the last game he reviewed was Game & Wario, so that might make any game look good.

Check by next week to see what is coming out, if anything, on Nintendo systems.

Check by next week to see what is coming out, if anything, on Nintendo systems.

Somebody is a Negative Nancy...

Are you mad we aren't getting the over-a-year-old port of Diablo 3? Or the retread of DOA 5? :P:

Not to sound like an A-hole... But I would love Diablo 3 on my Wiiu.  That dungeons and dragons game keeps getting delayed....  I want a game with that sort of play style..... For now all I have is skylanders....  :o

I'm just going by what Scott said. Blame him.

Good news everyone! Giana sisters is supposed to be coming next week, so we cancel the "Nintendo is Doomed #5347" alert

While I'm super-excited about Giana Sisters (played some of the DS version this week), I'm not sure that's exactly what you want to put on the "Nintendo is not doomed" column.