Double Dragon, Miracle Mask Plus, some Game Gear love, and a slew of videos hit the eShop in Japan this week. 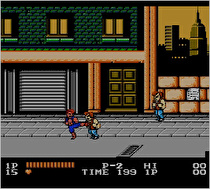 We have some big-name titles coming to the digital space this week, including two of the biggest Japanese franchises out there with Dragon Quest and Layton. Here's a complete list of all the releases for this week:

So, two Nintendo Directs snuck by us all. Starting last Friday, Nintendo released a nearly forty-minute long Animal Crossing Direct that shows off winter environments in the towns the developers have created, among a few other things. You can check out the video below in its entirety. There was also a short Chotto Nintendo Direct (referred to as Nintendo eShop News) released on the Wii U eShop today talking about special prizes for Wii U games being registered on Club Nintendo here in Japan. Players can register for a chance to win one year of free karaoke via Wii Karaoke U. There will be 1,000 winners and all entrants will receive 24 hours of free karaoke for the game.

A handful of other videos were uploaded to the eShop this week as well. First are some videos for Fantasy Life, detailing the interior design elements of the game, as well as showing off pets in the game. Your pets not only follow you around, but appear to assist you in battles. Another video shows off some of the bigger creatures that lurk around the overworld and feature footage of players beating an ice dinosaur, a flying creature, and a few others. The last video shows how by choosing the life of a prospector, you can take elements that you mine and then use them to construct weapons that can be used against monsters. Every time I see video footage of this game, I can’t help but think how much it reminds me of Animal Crossing with enemies to fight.

There were some really cool videos added to the eShop for New Super Mario Bros. U that show some people with some wicked skills. Our very own Daan Koopman mentioned one of these videos in the last episode of The Famicast, talking about a four-player simultaneous romp through a stage. There are three separate videos added, and you can view the one I just talked about below. If you want to watch some more awesome videos for New Super Mario Bros. U, be sure to check out the channel on YouTube. Last but not least, rounding out the video content were a new set of commercials for Animal Crossing and preview videos for Tank! Tank! Tank!, Professor Layton and the Miracle Mask, Magi Hajimari no Meikyū, Zombie Slayer, Johnny Kung Fu, and Nyokenshi Akane.

DQVII? For 3DS download?
Holy cow.
Any sniff this will come westward?

No idea, man. I just picked up the physical version of it today. I can get basically the same deal that the Nintendo Network gives (10%ish back on what I purchase) on stuff at an electronic store here in my town. I had something like 3,500 yen in credit and got the game for 5,000 minus my credit. So far in Japan, there is almost no reason to go digital unless it's a game you always want on your system.

So far in Japan, there is almost no reason to go digital unless it's a game you always want on your system.

I'd say that is the same in NA for Nintendo systems (i.e., no discount) but then again, that is the reason I buy some titles digitally  I like having them always available. It's a little thing that I never thought I would appreciate as much as I do.

That's the appeal for me: not having to switch out cards or disc. I'm a lot more likely to play something new or go bak to something I'd gotten away from when all it takes is a few taps on the touch screen instead of getting up and finding the physical game and puting it in. That doesn't sound like a lot, but the increased variety of what I play is tied to it.

@Insano: Exactly. There's this weird psychological barrier with having just one game at a time available to you in the slot. It's like I have prepare myself mentally to commit to another game and then muster up the energy to make the cartridge switch. Whereas if there are a bunch of games sitting on the system, I jump around depending on my mood of the instant.
I find it all very unexpected.