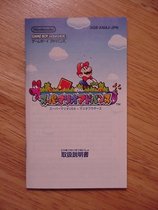 To complete this mini-celebration of our reviews, check out this list of the games we gave 10s:

And, for those who are interested, here is some fun data to extrapolate from this information.

Three of those reviews aren't even for games.  I was shocked, SHOCKED, that a Monster Cable product was so well reviewed, but then I saw that it actually won high marks as a disciplinary whip, and, well, I have to admit that Monster Cable makes pretty good whips.


Just look up the games reviewed by James.

Looks like Jeff Shirley got most of the bad ones.

Awesome I got one of the perfect ten reviews! :D

So, what was exactly wrong with Mario Power Tennis Tour? I never played that game.

Honestly don't like something awful.  Though I wouldn't give Mario Tennis a 10, now the Virtual  Boy one that's another story.

Metts did give Sunshine a 10 and I enjoyed that game so much more then Mario 64 so at the time I probably do around the same.

That is kind of funny, though to be fair, you can make those kinds of claims about any opinion. It feels more like satire than actually pointing out bad journalism.