In our first Nintendo history lesson, we look at the creation of Donkey Kong and the lawsuit that followed it.

Nintendo is a company with a very rich history behind them. With over a hundred years of existence a lot of great events happened that have shaped them and the videogame industry into what it is today. Nintendo History 101 will highlight some of the most important events in Nintendo history and how they affected gamers and the industry as a whole. In the first entry of this new feature we are going to take a look at the history behind one of Nintendo’s first videogame baddies, Donkey Kong, and his connection to one of the most recognizable movie icons of all time: King Kong.

King Kong is a groundbreaking motion picture that set the standards for future aspiring blockbuster action films. Despite its special effects looking primitive today, King Kong would become an unforgettable experience that would influence filmmakers as well as the average movie goer. So great was King Kong's impact that the appearance of a gorilla in any form of media is routinely followed by a quick reference to the film, whether by quoting its famous final line ("It was beauty killed the beast") or re-creating the final scene at the Empire State building. More importantly, famous characters were born out of the movie's influence. Enter Nintendo’s lovable ape, Donkey Kong. 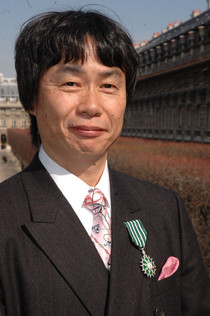 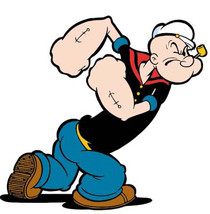 Miyamoto's original vision had Popeye as the lead

Donkey Kong is the brain child of designer Shigeru Miyamoto, who was working as an artist at the company when he created the character. While Nintendo had existed for many years as a toy company, they were going to experiment in the latest trend called video games. After a failed attempt with the coin-operated video game, Radarscope, Miyamoto was commissioned to design an arcade game that would compete with other famous titles. Originally, Miyamoto's idea for the game involved the usage of famous cartoon icon Popeye the Sailor Man, taking the basic premise of the franchise (Popeye saves Olive Oil from Bluto) and turning it into an arcade game. The Popeye license was under negotiation with King Features, but that fell through (although it was later re-negotiated for Game and Watch, Nintendo's LCD handhelds). 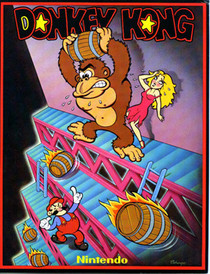 Miyamoto tried other ideas, and simplified the story of Beauty and the Beast. The final idea had a carpenter climb up the unfinished foundation of a building in order to reach his discontent pet gorilla, who had kidnapped his girlfriend. This came about due to technical limitations, most of Miyamoto's ideas were rejected as the characters had to do simpler things than he wanted or it wouldn't be possible to show it on screen. Replacing Popeye was a Brooklyn carpenter called the Jump Man (who would later become Nintendo's mascot Mario), Olive became Pauline, and Brutus the big hairy brute turned into Donkey Kong, a big ape on the run.

The reason Miyamoto chose the name Donkey Kong was because he thought Donkey meant dumb and stubborn, and his beast was a King Kong like ape, King Kong being a generic Japanese term for any kind of menacing ape.

The concept of the game was almost a mockery of the premise of the original film. In a passionate rage, Donkey Kong kidnaps the beautiful Pauline and takes her to the highest building possible. Players must then guide Jump Man (Mario) through the building, avoiding obstacles such as barrels and fire. The final scene could be considered a parody of the ending of King Kong; when all of the floor connectors are taken away, Donkey Kong falls from the building ("It was plumber killed the beast"), and Jump Man and Pauline are reunited once more. 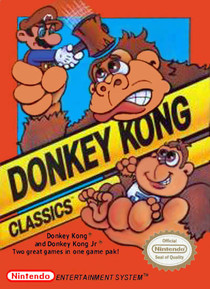 Donkey Kong was followed by two more arcade sequels. The first, called Donkey Kong Jr., stars Donkey Kong’s son as he rescues his father from Jump Man’s clutches. Like the first game, Donkey Kong Jr. is a parody of Son of Kong, King Kong’s sequel, starring the son of the protagonist. The third and final arcade game is Donkey Kong 3. Its gameplay was different from previous titles, featuring a new character, Stanley the Bug Exterminator. The premise is that Mario is away on vacation, and asks Stan to protect his garden from Donkey Kong and a slew of bugs. 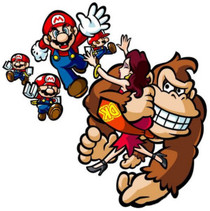 Nintendo's experiment with Donkey Kong was a phenomenal success. The easy to learn/hard to master gameplay hooked a lot of players back in the day. This lead to other successful releases that turned Nintendo into a videogame powerhouse that is still successful to this day. The characters that Donkey Kong launched would become icons in their own right, especially Donkey Kong and Mario. Their rivalry would be the stuff of legend, revisited time and time again in other projects that were just as fun as the arcade game that inspired it. 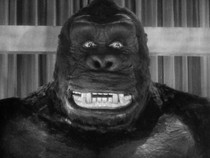 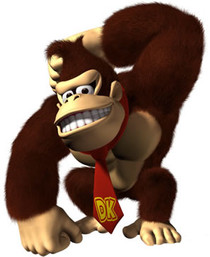 I give MCA Universal credit. The resemblance between the two Kongs is UNCANNY!

But the connection to the original King Kong film doesn't end there. Due to the rising popularity of the videogame, MCA Universal, a huge entertainment conglomerate that held the Universal Studios copyright of the movie King Kong, sued Nintendo in 1984. Nintendo's defense was that by the time the King Kong film was released in theaters the characters and plot were already in the public domain, and thus Universal Studios only owned the film rights, not the rights to the characters and concept. Nintendo met with MCA over the lawsuit, after a telex was sent to NCL that ordered Hiroshi Yamauchi (company President at the time) to turn over all of Nintendo's profits from Donkey Kong and destroy any unsold games within 48 hours.

It was found that MCA had never registered King Kong as a trademark, and past lawsuits, including one that Universal themselves had won, concluded that King Kong was in the public domain and could not be trademarked. Nintendo was awarded 1.8 million dollars. 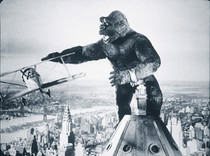 Like Kong at the top of the Empire State Building, the lawsuit was quickly shot down into history

This lawsuit would forever link the film and video game industry. Nintendo's victory was a startling victory for the game industry, while Universal's defeat was deemed laughable and humiliating for the company. This demonstrates that King Kong was so popular that even using its premise (in the form of parody) caused waves.

As for the character of Donkey Kong, he would later be reinvented from a villain to a hero in a new Donkey Kong series released in 1994 called Donkey Kong Country. The games, Super Nintendo exclusive, were all platformers similar to Mario's own efforts that pioneered the use of pre-rendered sprites to create a visual presentation that was stunning and unforgettable. Kong is a common character in Mario's games, whether as an assistant or a playable combatant. In other Nintendo games such as Super Smash Bros. he appears to represent his character from the legendary arcade game, and is appropriately always the strongest character in the group.

Donkey Kong would even be the subject of a CG cartoon based on the Donkey Kong Country game series. Unfortunately, the series was very mediocre and was thus quickly forgotten. 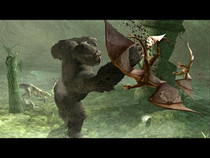 Going back to King Kong, despite the embarrassing lawsuit Universal was still behind the franchise, re-releasing the films for many years and even creating a theme park attraction based on the original film. In 2005, they released a remake of King Kong directed by Peter Jackson (just one of the many directors that were inspired by the stop-motion-animated ape). The film received mixed reviews but was still a success. In an ironic twist, King Kong would be the star of his own videogame based on the remake and released for the Xbox, Xbox 360, Nintendo Gamecube, and Playstation 2. In the game players took on the role of both Jack Driscoll and Kong as they survived the perils of Skull Island, recreating the film's best scenes. It was a surprisingly solid effort by Ubisoft and looked good as well.

Ironically, one of the most menacing apes in cinema history managed to create one of the goofiest primate video game characters of all time. Donkey Kong is proof that an iconic film character can inspire derivatives that become just as successful as the original. After all, imitation is the most sincere form of flattery.

Additional information provided by the book Game Over: Press Start to Continue by David Sheff.