If you’re a Penny Arcade reader, you’ve probably learned of the Pokemon Trading Figure Game. Gabe has been hawking it for a few weeks now. In fact, that’s how I first learned of the game, and I swore on my dead lizard’s grave that when I saw the game on the shelves of the local comic shop, I’d give it a shot. So barely more than a week ago, that day came, and I bought everything I’d need for a two-player game. And then—and this is the magical part—I got my wife to play with me.

The Pokemon Trading Figure Game (TFG) is tough to understand without actually playing it. Each player has three (or six) Pokemon, and a Trainer figure. The players lay out a map, on which the action takes place. The map shows a Pokemon Center, a Bench, and a complex pathway to the other player’s Goal. To win this TFG, you must maneuver one of your Pokemon to your opponent’s goal. The dots and lines separating you from your enemy represent spaces on the map, and each Pokemon can only move so many spaces per turn. It’s when two Pokemon find themselves on adjoining dots that the real action begins—now, we BATTLE! 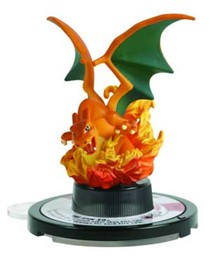 Your Pokemon sit atop little spinners which, when spun, reveal the attack (or lack of attack) that your pocket monster will use. For example, Meowth has Fake Out (a special move), Scratch (which does damage), Miss, and Dodge. For the curious, Meowth has 2 Move Points, so it can move 2 spaces per turn. Anyway, let’s say that Meowth is attacking a Pikachu. Everybody’s favorite electric rat lacks a special move, but has three damaging attacks, two Miss spaces, and a Dodge space. And now, the spin! Each player spins his or her Pokemon to determine the attack.

Let’s say that Meowth’s spinner stops on Fake Out, while Pikachu lands on Thunderbolt. Fake Out does no damage at all, but it’s a “purple" attack. Pikachu’s Thunderbold attack does a whopping 100 damage, but sadly for Pikachu, purple attacks beat white (damaging) attacks. So the players do what Fake Out says, and the turn ends. There’s an element of Rock-Paper-Scissors here, in that Dodge beats purple, which beats white, which beats Miss. Some Pokemon have great purple attacks, but crappy white attacks, so going into any battle can be a gamble. Some Pokemon seem overpowered (like Groudon) until you realize that he has no purple attack, and a large “Miss" area. 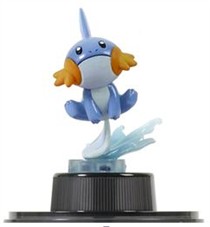 Each Pokemon’s attack circle is unique, and divided up basically like a pie chart. For Meowth, Fake Out takes up about 40% of the circle. That leaves another 20% for Scratch, 25% for Dodge, and 15% for Miss. In the end, the spin system is all based entirely on chance. Your Pokemon could have a kick-ass purple move, but if you never hit it on the spin, it’s usually back to the Pokemon Center with you.

When I was buying a few booster packs last week, the comic shop guy asked how HP is determined. Good question. Since each Pokemon does damage, they must have HP, right? No, they don’t! White attacks (which deal damage) are only taken into account when both players spin a white attack. Whoever has the strongest attack knocks out the other Pokemon, who is regaled to its owner’s Pokemon Center. There are some Pokemon that have stupendously powerful attacks. But if Ho-Oh goes up against a weak little Murkrow, and the Murkrow spins purple, then it doesn’t matter how great Ho-Oh’s Fire Blast is because purple beats white. There’s more to the game than just beating up your opponent’s Pokemon, though. There are several ways to upset the game. Most purple attacks, for example, require you to rearrange the Pokemon on the board, either by moving them away from you, moving you toward the goal, or sending one or more Pokemon to their player’s benches. Also, should you ever find yourself surrounded on all sides by your opponent’s Pokemon, you are automatically knocked out. My wife doesn’t like this rule, and so we don’t play by it, but in practice it makes for a more strategic game. There are also Trainer cards, like in the card game. By and large, they do the same things. Max Revive lets you take one of your monsters out of the Pokemon Center. Switch lets you switch two of your Pokemon on the field or the bench, etc. The Trainer figures, whose dials are 90% Success and 10% Miss, are there to check whether or not you can actually use the Trainer card. Otherwise, they have no purpose other than to look awesome. 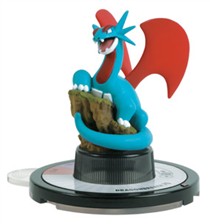 The figures themselves are meticulously detailed and most of them feature impressive “elemental" effects. Charizard and Torchic, for example, are bathed in flames. Kyogre is breaching out of the water, Groudon is encased in rock, Pikachu is throwing a lightning bolt. It’s all very impressive, and even more so when you consider that the majority of the figures have a balanced spin. They all look like they hopped out of your DS, as the figure’s likeness to their digital counterparts really is unbelievable.

The game is not for the cheap of heart, though. While I suspect everything is more expensive in Alaska, a single figure will cost you about $4. There don’t seem to be discounts on multi-figure packs. Starter sets, for example, include four figures (three Pokemon, one Trainer), a rulebook, a checklist, and a game map, and it costs $16. The figures are also sold in one, two, and three-figure packs. In the two and three-figure boosters, one of the figurines is hidden behind a piece of cardboard. I now have two Meowths because of this. The three-figure packs, which I’m hoping are just a phase, include one figure you can see, one Diamond/Pearl starter, and one mystery figurine. After you collect all three of the Diamond/Pearl starters, there is no need to buy another 3-pack. I read online that figures are being released slowly, which explains why I don’t have the majority of the Pokemon yet. There are just over 40 in this set, but because there’s a “name" for the set (Next Quest), I can only imagine that, someday, there will be almost 500 individual figurines to collect. I also hope that the vast majority of the figurines will be available in single-pack form, so that I don’t have to waste money on duplicates. But as a veteran of the Pokemon trading card game (back when it was good), I know that’s probably not going to happen.

Do I recommend this game? If you’re a sucker for collectable games like I am, or you’re just looking for a fun strategy/luck-based game to play with your friends, the Pokemon Trading Figure Game is a solid choice. It’s not cheap, but I have yet to see a collectable game that is, and this one is better than most.