This franchise is beautiful. 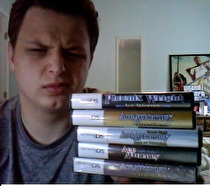 My original introduction to the Phoenix Wright franchise was in 2005 when I was 11 years old and my only source of video game journalism was pre-Cops G4 programming. When the original game was reviewed on X-Play, the novel idea of playing a video game as a lawyer coupled with childhood dreams of actually becoming a lawyer came together as one insurmountable need to play it. I didn't actually own a DS until 2006 or 2007, but my unreasonable pre-teen mind leapt at nearly every GameStop within a close distance to obtain a copy of the game. If anyone reading this knows what it was like trying to obtain a copy of Phoenix Wright: Ace Attorney in 2005, you might also be able to figure out that I did not get to play Phoenix Wright: Ace Attorney in 2005. Low print run, no reasonable GameStop carried it, $70+ eBay prices – you get where I'm coming from. 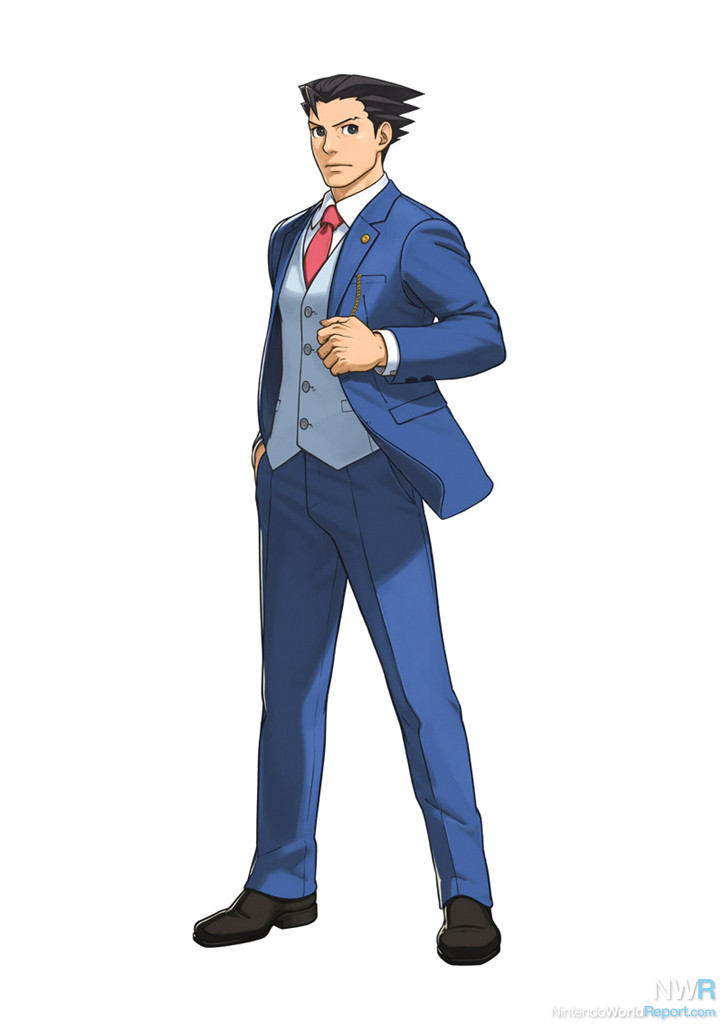 So, I forgot about the game until 2009 or so when I finally found an opportunity and got ahold of it. I was too young to appreciate the game entirely, cheated a ton by looking in FAQs to lose any of the franchise's serious tension, and then forgot about it. Inevitably, I found myself in mid-2013 with a fifth entry announced on 3DS for the west and 18-year-old me not giving this series the time it deserved. Aware of this and sick of putting it off, I finally set out to play through the series. I already owned the first two games from seeing them on sale over the past couple of years, but decided to hunker down and pick up the third game, the fourth game, and the Miles Edgeworth spin-off at a cool reprint-y $20 each on Amazon. And ultimately, I finally (finallly!) played through the 80-hour Phoenix Wright franchise right before E3 to get myself ready for a 3DS demo that may or may not be there. And man, what a series.

As opposed to other adventure games that just offer a detailed story alongside a few puzzles and minimal real gameplay, the Phoenix Wright games manage to provide an adventure game experience where the story works with the gameplay rather than working in spite of it (or even instead of it). And when I play Phoenix Wright, I pretend that I'm playing it not as an adventure game, but instead as a lawyer simulator that takes place in an alternate version of Los Angeles. 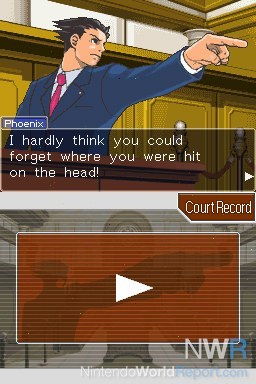 And I stress "alternate." Despite taking place in a North American city (in the English versions), all of the beauty found inside of the United States legal system is nowhere to be seen. Gone are the stoic impartial judges and a jury of your peers determining your fate and fault. In Phoenix Wright, the judge is an easily swayed kindly middle-aged man who is given complete power, the jury is gone, clients are guilty until proven innocent, and opposing prosecutors can carry and use actual whips in court. That’s not to mention how faking evidence is commonplace and the games feature a public audience who is granted the ability to rant and throw confetti when a case takes a dramatic turn. Only in the fourth game was this changed at all to something more reasonable. This mockery of a legal system clearly parodies the dysfunctional mess that is the Japanese court system, but realism was never the strong suit of the franchise (which the live-action movie undoubtedly speaks to).

And yet, as opposed to any other dry attempts at emulating a courtroom that may have existed in the past (I imagine a PC-exclusive Courtroom Simulator 2013 has probably been made somewhere in Eastern Europe by now), the crazy thing about Phoenix Wright is that it still manages to make you feel like you're part of a relatable legal system despite its insanity. Like in a real courtroom setting, the ultimate goal of the defense attorney is to focus on finding your own clear path of logic, break down others that don’t make sense, defend your client, and find out what really happened regardless of how pretty and neat that truth is. When you are in court cross-examining a witness (with enough self-restraint to not cheat), the odds always feel stacked against you with a judge whose mouth is constantly halfway towards making a "g" sound and a prosecutor who freely fudges evidence. The beautiful thing about the world of Ace Attorney, however, is that no matter how hard the game may get or how impossible the situation seems for your defendant, the truth will always prevail. 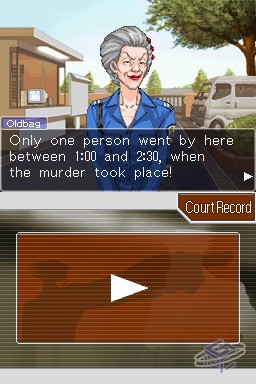 As a story, the series keeps a running narrative going that has been unapologetically pushing forward and granting only half-hearted explanations to newcomers for over a decade. The franchise features the beginnings, multi-year long career, and collapse of a defense attorney, an extensive family history with your legal partner who is also a spirit medium prodigy, and a prosecution rivalry that goes back to grade school. Playing Phoenix Wright is occasionally an extremely goofy experience with well-developed characters that feel like they belong in an anime over anything else, but the narrative within the cases Phoenix has to solve and the uphill climb to the brutal truth is so well put-together and properly paced that I feel like I'm marathoning the best courtroom drama I've ever seen instead of playing a DS game for four straight hours.

While the characters and situations are occasionally funny, they also merit being taken seriously and provided a level of care. And boy, when the story takes a twist, it twists. Though never gratuitous, the jaw-dropping turns each case can take on a dime somehow manage to be both a series staple and immune to diminishing returns simultaneously. If nothing else, the Ace Attorney plot is a marvel to behold.

Even though the games are by definition in the "adventure" genre, referring to it as such sells the franchise extremely short. While the famed courtroom sessions where you need to analyze evidence and cross-examine witnesses is a type of brilliant puzzle gameplay never quite seen in another game before, the actual first-person investigation portion where you have to move from location to location to find evidence, gather information in still scenery portraits by tapping on a screen, and choose dialogue options to give NPCs is, on the surface, entirely standard fare. 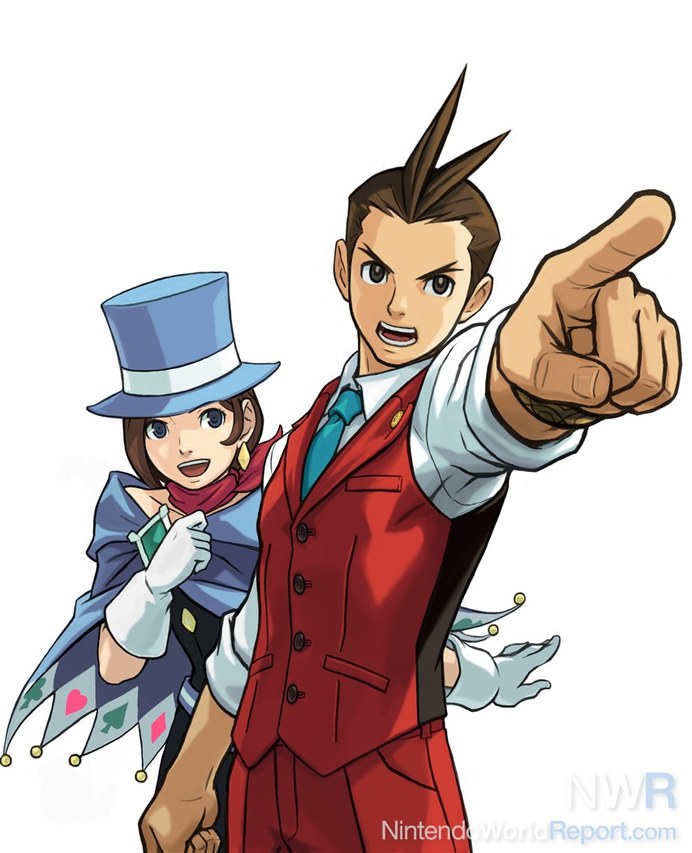 Even so, these segments (at least 50% of a given game) actually provide a vessel to experience the story unfold and function as a harbinger of what to expect in the story ahead (instead of a series of puzzles that just keep you from referring to the game as a visual novel). It's certainly competent detective gameplay to offset the fast-paced courtroom drama, but its true purpose is to force you to experience the story as the main character and not as a person playing as the main character.

So, after finally playing through the entire series (without cheating – mostly!) as an adult this year, I have nothing but praise for these games. Despite its insanity and unrealistic aspects, the games allow me to finally live out a childhood dream and be an insanely awesome defense attorney. Moreover, the story is able to toe the line between exceptional drama and exceptional levity with ease, and the courtroom gameplay of finding inconsistencies and breaking logic is astounding. It's potentially one of the only adventure franchises I've ever played where not once does it feel like a slog, and to put it bluntly, Phoenix Wright: Ace Attorney feels like a series built just for me.

Huge AA fan. My girlfriend and I played through the first three games on WiiWare and had a blast with them. We're currently trying to play Apollo Justice on my XL, but it's tough. We both can't help but get sleepy while staring down at the 3DS!


Still, this is a series with great music, fun characters, and plot lines that (usually) keep you on the edge of your seat. They aren't perfect. They have problems with pacing, some weird logic jumps at times, and are definitely GameFAQ worthy more than I'd like. The games also live and die by their characters....so if you find yourself in a case you're not into, then chances are you won't be having that much fun for a while (we weren't fans of the Tres Bien case in Trials and Tribulations).


I really can't wait to get through the rest of Apollo Justice, and we have Miles Edgeworth on deck after that. If you're on the fence about these games, the first couple cases of the first game are free on iOS right now. The game looks pretty slick in HD, even though I personally like playing it on a TV with my girlfriend. It's like watching a movie together (a very long movie where you do lots of reading).

Great write-up, I forgot a new AA game is coming and and reading this article makes me want to play all the games in the series; the ones I have anyway. I don't think I ever had a chance to pick up the Edgeworth game (and wasn't there a sequel? Japan only I believe??) but I'll jump at the chance to play a new entry in the series once its available.