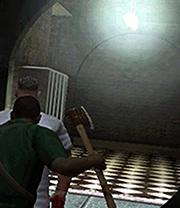 The first asylum resident the voice coaxes Daniel Lamb to slaughter is a nurse standing a few steps down the hallway, his back turned.

"He's the only thing standing between you and freedom. Kill him."

Afterward, Daniel throws up. Childlike qualities sound in his pleading, confused voice, and there's a matching timbre to the way people address him throughout the hazy moments of Manhunt 2's introductory sequence. Circumstances paint him as something of an abused, tragic figure, but that notion evaporates with each life he snuffs out.

Manhunt 2 holds little regard for mental continuity, and uses the compromised psyche of Daniel to push you through a bleak, hateful world. The game trades on interactive scenes of brutality and regressed, primal behavior; almost immediately, I learn the best methods for taking a life unnoticed, and how to negotiate the Wii's motion controls to maximize the frenzy with which I do it. 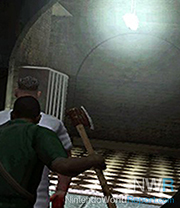 When I reach the second person I need to kill, the voice is less direct.

"I'd take it slowly, if I were you," it drawls, and I peer down the hallway at the plodding victim-to-be. There's no naked prompting to kill now, but I find that I do, in fact, know what I need to do. But as I move Daniel along the interior of a darkened alcove, I move the Nunchuk too much. He knocks against the wall.

The inmate takes notice and moves near, making the stealthy shiv kill I had in mind useless. I bloody him with awkward punches and kicks until he's still, crumpled in the fetal position and quiet.

The next nurse I run into gets brave, and charges me. At this point, I've acquired a large hammer, and he goes down with two swings.

"We're gonna get you too, Lamb," a pair of bruisers yell at me as they put the finishing touches on the pulpy corpse of an inmate. They're also nurses. 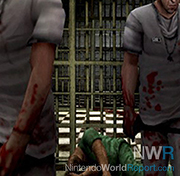 I wait for opportunities to strike, and do so with all the grisliness the game allows me to muster. And then I run away, like a stooge whacking a mailbox, and find more shadow in which to hide. I'm a coward, and disgusting, as disgusting and irredeemable as anything else in the game.

The game's poor controls go hand in hand with the brief and terrible acts I commit. When I reach the apex of a kill, reality rushes forward into a red frenzy, and I flail—in the frantic momentum of self-preservation, and to match the on-screen prompts—to cut, bludgeon, puncture, and maim. When I've mastered the sick art of snuffing up close, the game gives me guns. Though somewhat useful from afar, using them in the more frequent and manic close quarters situations is as easy and practical as pivoting a battleship, and I find myself spraying, with gory results, in appropriately disjointed encounters.

That Manhunt 2 do anything deft with the violence and human degradation it portrays and holds tight to probably asks too much. The game is a trench of demonstrably heinous behavior and increasingly pathetic swipes at characters and story. It's a mediocre stealth game, a lousy shooter in the back half, and a psychologically unpleasant waste of several hours.

The game slowly plateaus into scenarios in which guns, and the frenzied combat they invite, are the only viable tool. No more hypodermics. Few shards of glass. Use fists at your own peril. In this way, Manhunt 2 grows backward into complacency, shedding in unison the confusion of the early plot and the nightmarishness closeness of your violence, and turning into a game of boring half-psychos with guns against sadistic full-psychos with the high ground and more guns. If nothing else, Manhunt 2 works as a novelty, seemingly losing interest in itself around the same time you do.

I have hope that Rockstar's oeuvre will be looked back upon as the sloppy, infantile, crass, poorly designed mess that it is.

This reminded me to go back and finish Hotline Miami.

The game was totally devoid of "fun". Search a house for medicine is tedious and dark. Wait behind a corner for the guards is boring. Find an axe to decapitate a dude to open a door is, believe it or not, rather tedious. The game has too many long stretches of grime and straight hallways. Most of the objects are laughably blocky, as in worse than most PS2 games by a good margin. You have no connection to your player character so there's very little feeling of tension. The "creepy" bad guy faction was generic. The censored kill cams, which I've read bothered many, where a none-issue to me in comparison to the pointless QTEs for the execution (why just grade the kill based on the total time I was in light and "stalk mode" (holding A) before reaching the target). The game's biggest strength is overall atmosphere, with brownie points to the "hold Wiimote still in shadows" mechanic- one of the better uses of motion control on the Wii (however completely negated by having to hold the nunchuck perpendicular to avoid putting your character in to a pointless 'lean' position). Bully and Table Tennis are better efforts than this by Rockstar on Wii, but even those make you wish we could have seen something original from them (or even "just" a new, exclusive, Smuggler's).

I remember this being one of the worst games I'd ever played.