Knocking down the wall. 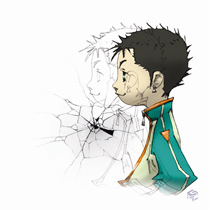 Contact's open is especially cold. You happen upon what appears to be a low-bit, white-haired old man, clacking away at keys in front of his computing machine. You let a moment or two slip passed while you wait for the inevitable greeting and/or identification, but he's clearly deep in his work. And so you wait, or, if you're less the patient kind, take to thumbing buttons, making the rounds to find the one that will get things in motion. Nothing. Clack clack clack.

It's a puzzlement, at least until you slide the stylus from its sheath, prod at one of the two animate objects on the screen, and find yourself smacked with a curious reality: there's no intermediary between yourself and this man, the Professor. He feels that jab, and reciprocates the action by speaking directly to you—the you holding the DS. Seems the system in your hands has bridged the respective planes of existence, giving you a window into and a modicum of control over his world. After running you through a gamut of identifying questions, the Professor requests your assistance with the retrieval of some particular items. Some kind of cells.

"Help me control the outcome," he suggests. "We can even pretend it's a game."

Contact, or rather the subsection of it in which you control the actions of a character in the Professor's world (a young boy named Terry), is indeed much like a game you might play. If you take the Professor's advice, you'd likely pretend it as a role-playing game, dense with exotic worlds and items and people, and that assumption would be partially accurate. Terry—the boy zipped away from his home and directly manipulated by you—fills the silent protagonist role roundly. He fights battles on his own once you toggle him into his aggressive stance (though you can equip him with a weapon or a stat-boosting sticker, activate his higher-tier attacks, and tend to his health), moves when and where you need him to, and requires little additional fuss. He's a surrogate, and when you exercise control and steer him through the relatively sparse trappings of the "game" to help out the Professor, you play a role through him. 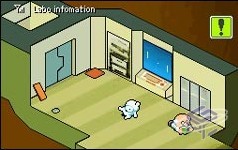 What Contact lacks in what could be called traditional RPG personality is kind of inconsequential. The tone of disconnect and dissonance it imparts through aesthetic, gameplay, and conversation is intentional, and often more in service of inspiring puzzlement or genuine thought than a memorable moment of action or spectacle. For example: The Professor, though a friendly composite of detached humor and partial helpfulness, can't really be bothered to give a convincing damn about Terry or how he uses him, even though they exist in the same world. His disposition toward the boy, though, is probably not unlike your own, a commentary the game makes and revisits poignantly over the course of its surreal road trip.

That tone of disconnect and dissonance are making it very hard to get back into this game!! I just started Contact, and while the presentation and concept are interesting, the execution could use some polished. Frankly I find the gameplay clunky and combat is boring… TBH I bought it because it was Grasshopper, and Atlus' name was on the box and it was $10


There are better games in my backlog I could be playing!

I remember seeing this game in Game Crazy years ago and I almost bought it because the graphics reminded me of Earthbound but then I went home and read about it and found out it was nothing like Earthbound. Boo-urns.

I've been curious about this game since I first saw the box on the shelf. When I found out it was from Grasshopper, that curiosity spiked. Haven't taken the plunge yet. But it seems like the kind of odd, different experience I'd like.