Who knew that having a gambling addiction would be so much fun! 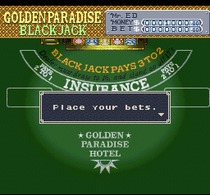 Growing up I had my fair share of favorite Super NES games, ranging from  Donkey Kong Country and Super Mario World to Street Fighter II and Mortal Kombat II. However, there was one game that stood out for me, even though it is nothing like the games I previously mentioned, and it’s a genre of gaming very few kids cared for back in my day: video gambling. That game, my friends, was Vegas Stakes.

Developed by HAL Laboratory and published by Nintendo, Vegas Stakes is the SNES sequel  to Vegas Dream, released for the NES. It features five gambling activities: Craps, Roulette, Poker, Blackjack and Slots. You play them in order to try and win money. If you win, you rule the world. If you don’t, you lose money AND self-respect. Those are the basics of it all. 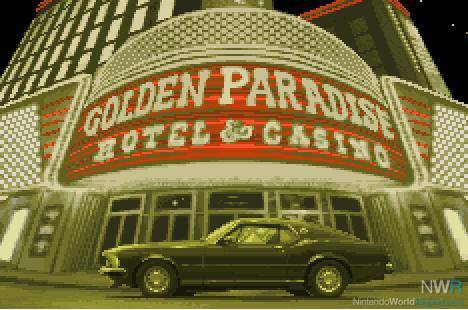 Welcome to Golden Paradise Hotel and Casino! How may we take your money today?

So the question is why I did like this game so much? I mean, kids hardly care for gambling games. That’s something retired senior citizens are into (if you pardon the broad generalization). In real life, I am so unlucky at gambling that I not only lose my shirt, I lose the rest of my clothing along with my dignity and quite possibly my soul! Vegas Stakes did something that very few gambling simulators do, and that is it told a story complete with active participants and a varied supporting cast. 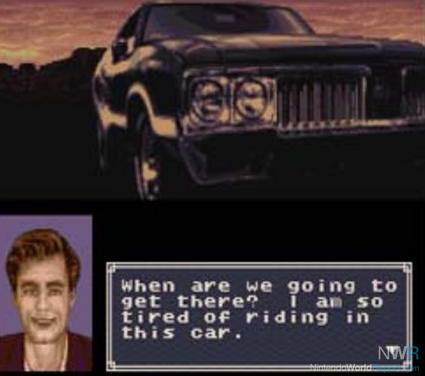 Yeah, there's always that douche who tags along with the group on EVERY road trip.

When you load the game's Vegas Adventure mode, you are treated to a cut scene of a group of friends driving down the Nevada desert on their way to Vegas. They have very lively, if stereotypical, personalities that are fleshed out through random conversations. And YOU are the driver of these fun loving souls! How awesome is that? When you arrive to your hotel, you are asked to sign in your name.

Now, as any red-blooded gamer will tell you, there is nothing more fun that using a dirty or silly word as your name. In this game, I used a lot of potty mouth banter to name my unseen screen avatar. Once you register at the hotel, you are given the option to go to various casinos with one of your friends. The casinos themselves are full of personality, and have varied themes, such as the old west, the future and, of course, ancient Greece. Even if the activities remained the same, the atmosphere was always great, and it really did feel like you were casino-hopping down the strip. Also worth noting is that depending on how elaborate the casino was the prices would always raise, but the chances of winning more money were higher. 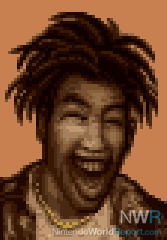 Does his smile hide good intentions or Satan's evil deeds? You will never know until you give him your trust.

But the one thing that I always remember vividly about Vegas Stakes was the people you would meet while gambling the night away. Every once in a while, someone would bump into you and ask for monetary help. Afterwards, you would learn if the decision was a wise or foolish one. This served to test your judgment of character, as some of the characters range of psychotic looking weirdos to girls so cute and innocent you would give them the deeds to your house if you could. Some were even expert pick pockets that would rob you blind! This is something I’ve yet to see in any other gambling simulator. It is really unique and added a lot of character to a game that quite possibly was drowning in it. They would always go directly to the gambling activity, ignoring the option of creating the pleasant atmosphere most casinos have.

That’s not all, though. The goal of the game is to try and reach 10 million dollars. If, by some sort of miracle, you obtained that much money, the game would end. It then asks you to type out a dream you have. Once again, if you were immature, you wrote something like “I want to be a Power Ranger” or “I want to **** a hot chick!” It ended on a ton of hilarity!

The music to Vegas Stakes was also really good. Considering that when you are gambling you mainly care for the odds and the money you are making or losing it is impressive how HAL Laboratory went above the call of duty to create music that was representative of the whole experience.

So really, Vegas Stakes was a game I never played for just the gameplay, but the atmosphere, characters, and the story it told. So much so that I actually bought it when it was released on the Wii’s Virtual Console section of the Wii Shop Channel a few years back.  It was a great way to convince someone not interested in gambling into spending time with these dreamers and party people who just want to spend their money on the famous Vegas casinos.

Remember, whatever happens in Vegas, stays in Vegas…even in a digital representation of it.

I agree with all of the above. My friends had Vegas Stakes when we were kids, and we played it for hours. It's weird to think that we spent so much time trying to win fake money, but the characters and random events made the experience feel whole.

I bought this on the VC because of my nostalgia for Vegas Dream.

I agree with all of the above. My friends had Vegas Stakes when we were kids, and we played it for hours. It's weird to think that we spent so much time trying to win fake money, but the characters and random events made the experience feel whole.

I am surprised to hear so many people have nostalgic memories about this game. Vegas Stakes is a rather obscure game and I am surprised people actually remember it. Yeah, the game is great because it tried to do more than just present you gambling activities. Like I said already, no other gambling simulator has done that, and Vegas Stakes remains unique because of that.

That’s not all, though. The goal of the game is to try and reach 10 million dollars. If, by some sort of miracle, you obtained that much money, the game would end. It then asks you to type out a dream you have.


I think winning 10 million dollars would be my dream to start with.  ;D

I have a weird association with this game.  I remember when the N64 came out, as one would expect, the SNES dried up.  New releases became infrequent and the SNES game selection in stores shrunk.  I distinctly remember the SNES selection at the local Toys 'R' Us and it got smaller and smaller and the remaining games became less and less interesting.  Vegas Stakes was the game that NEVER went away.  They always had tons of copies of it.  Over time it was pretty much the Vegas Stakes section of the store.  I think eventually they were charging like a buck for the thing and I STILL didn't get it.  This went on for years, like probably until 2000 or so.

Reading about it Vegas Stakes sounds like a pretty neat game with a lot of cool ideas that one just would not expect from a gambling game.  But the sheer fact that it is a gambling game was the kiss of death for it.  The assumption would be that it would just be barebones blackjack, poker, etc.  No kid wants to play such a game.  The other types of games none of us kids ever wanted to play were games based on boardgames or game shows.  I'm pretty sure the entire motivation for such titles is to trick parents.  They know NO kid would ever want such titles but parents can be very out-of-touch regarding the tastes of children.  These are concepts non-gaming adults (ie: virtually every parent when I was a kid) are familiar with so they might buy these games for their kids mistaking their own lame ass old people tastes for their kid's.

Still if you were the unlucky kid to get stuck with Vegas Stakes it's good to see that HAL made something worth playing.  The key thing is you don't NEED a videogame to play casino games.  Same with boardgames and game shows.  So why would I bother to buy such a game?  It's like buying a virtual coin to flip.  This approach makes TONS of sense because it offers exclusive gameplay that only a videogame could provide.

I'm surprised and happy to see this game get a special write-up, because I, too, have fond memories of the SNES original.  My brother was six years older than me (still is), and this is one of the last games he still spent a good amount of time on.  Sadly, I sold my copy when the N64 came out, as I was under the Project Reality spell and thought all of my awesome SNES games would be better as cash toward fantastic new titles like Shadow of the Empire and Cruisin' USA.  I'm sorry, Vegas Stakes.  I'm so, so sorry.

There was also a spinach Gameboy version of this game. I owned the Gameboy version and that's the only one I ever played, but it was awesome. The graphics were spinach and not as good, but I'm sure the gameplay wasn't much different. Of course the gameboy version was portable, and that's a great thing for a game like this because this is an awesome game to play on the go.

I didn't know there was a Game Boy version! I just saw footage of it and it is very similar to the SNES version, save for the graphics of course.

I own Vegas Stakes but I've never played it, I got it in some SNES lot I bought. I have, however, played the original, Vegas Dreams on NES, and although I don't remember much, I do remember it being a rather addicting game.

One thing I forgot to mention is that first you must earn a million dollars playing through the first set of casinos. When you do, the owners will upgrade your room and send you to the Laurel Palace (aka the Ancient Greece casino) where you can win the other 9 million.

I remember on the Gameboy version (which is the only one I've ever owned or played) there would be random things that would happen while you were in the casino, like you'd find someone's wallet and you had the option of either returning it or keeping it and the results of this would be random. If you returned it you might get a bigger reward than what was in the wallet or vice versa. There was a bunch of stuff like that which could happen.

One thing I forgot to mention is that first you must earn a million dollars playing through the first set of casinos. When you do, the owners will upgrade your room and send you to the Laurel Palace (aka the Ancient Greece casino) where you can win the other 9 million.


Actually, it only takes 100k to make it to high roller status. You still need 10 million to beat the game, though.

By the way,as far as I know, this is the only SNES mouse game on the VC, though sadly it doesn't support pointer controls (which would have been cool).