What could be better than Pokemon? 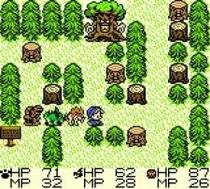 Could I interest you in some monsters?

Most Nintendo World Report readers are familiar with the highway of video game information and misinformation that is recess – a time where pre-teen gamers gather atop the jungle gym to plan victories and share tips for whatever games are on their minds. Dragon Warrior Monsters is so rich with secrets, advanced techniques, and multiplayer functionality that it could easily support an entire class of Game Boy-wielding fourth graders. Unfortunately, Dragon Warrior Monsters wasn't very well known; in fact it was seen as a lesser alternative to the widely marketed Pokémon series.

All Dragon Warrior Monsters conversations took place in a less comfortable corner of the sandbox, between the monkey bars and the creepy whale toy. It made sense, because as one of two kids on the playground that owned Dragon Warrior Monsters, I understood that nobody cared for or understood what we were talking about. Weekly attempts were made to evangelize the game, but none of my peers would recognize that there could be a game worthy of replacing their current portable monster-catching diversion of choice.

Feel free to consider this article as the ramblings of someone that never quite got over an elementary school feud, or perhaps consider peeping out from behind the Pokémon blinders to reveal what should be considered the definitive monster collection experience of the Game Boy.

Players take on the role of a young boy, Terry, who sets out to win a monster-battling tournament in the hopes of rescuing his kidnapped sister. The main story arc of Dragon Warrior Monsters can be completed quickly, and in fact, the core game consists solely of a series of tournaments that culminate in the game's final battle.

Of course, if one is to participate in monster tournaments, they will first need to gather and train a team of monsters. Terry has the ability to persuade monsters to join his cause, and he accomplishes this by bribing monsters with meat. Capturing in Dragon Warrior Monsters is more akin to the negotiation system in the Shin Megami Tensei series than Pokémon, and there isn’t a Master Ball equivalent. 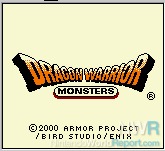 Comparisons to Pokémon are inevitable. After all, this is a game where the player must pit trained monsters in battle against the monsters of other trainers. Of course, appearances can be deceiving. Right from the outset players will notice that it is often necessary to provide monsters with generic tactics as opposed to giving direct commands in battle. This heightens the importance of honing the perfect skill set for your monster, and ensuring that they have been bred properly.

Monsters are found by exiting the hub world (a massive tree) and stepping through warp points, or Traveler's Gates, into randomly generated dungeons. Most Traveler's Gates contain a set amount of floors, unique monsters, and a boss battle at the end.

The game's true depth is exposed to players that have an itch for exploration and collection. Many Traveler’s Gates aren't easily accessible, requiring you to have performed a specific quest or have reached a certain level to enter. Dragon Warrior Monsters does a fantastic job of teasing these gates, so that the player will likely know where an extra gate will be, but not exactly how to gain access to it. This element of discovery adds a constant driving force to the player's progression.

Why bother finding extra gates, you ask? Traveler's Gates often contain unique monsters, treasure, and even other traveling monster trainers whose monsters you can steal during battle. The game will normally give the player a tiny hint at what kinds of monsters will await them upon unlocking a gate, and there's always the hope of finding a gate filled with experience-rich metal slimes. The allure of finding new monsters within Traveler's Gates goes far beyond leveling characters and capturing new creatures to add to your menagerie, because monster collection also ties into the game's breeding system.

Breeding in Pokémon has grown more complex over multiple iterations, but to this day the breeding system in Dragon Warrior Monsters still outshines those in Pokémon. Most monsters can be bred through a variety of combinations, but a monster's parents govern its stats at level one, its maximum potential level, what skills it will inherit, how well it will obey you, and how quickly it can gain experience. If you play your cards right, after a long chain of calculated pairings you can end up with a monster that is immensely powerful right after being hatched. Breeding can be a risky affair, since the game requires one to save the results, and the parent monsters are instantly lost to the character.

Some monsters can only be obtained through breeding, and it is up to the player to discover how to create these mystery monsters, many of which are important bosses from other Dragon Quest games. In fact, most of the monsters in Dragon Warrior Monsters are taken straight from the Dragon Warrior/Quest series. Fans of Dragon Warrior will revel in having a high-tier Draco Lord on their team. 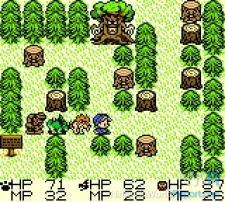 All of this preparation isn't necessary to complete the game, but it becomes invaluable in order to grapple with Dragon Warrior Monster's post-game content. At the game's finale, (spoilers ahead) it is revealed that the entire game may have been dream sequence, but the player is given the option to return to Great Tree and continue their adventures after the credits roll. It is at this point that the player has the opportunity to face off against the game's most powerful boss – something that I toiled with for months in my youth. While most games are content with defining post-game content as reverting to the save immediately before a final boss, or allowing a new game plus, Dragon Warrior Monsters crafts a repeating challenge that can easily last as long as the main game without even taking into account all of the gates and monsters the player can pursue as a part of this challenge.

Dragon Warrior Monsters can potentially be a massive time sink, and I was fortunate enough to play it at a time when I could make it just that. I found the monsters interesting, the combat exciting, and the breeding system incredibly addictive. I encourage anyone still reading to seek out a copy of the game, because it may just be for you what it was for me: better than Pokémon.

Sounds great! I'll play it real soon. I didn't look at the spoilers in case this might be a game that I will like.

Talk about lucky! I heard about this on either RFN or the Newscast, and I was really interested. I sincerely hope they bring this to the 3DS e-Shop!

Dude! This game IS fun! I have only played it for like 30 minutes, but I really like this game already! I was looking for another Game boy game to play for a while anyway!


Kidding aside, it isn't too hard for a similar game to be better than Pokemon. I recall reviews at the time plainly stating that Dragon Quests Monsters is a better game. Unfortunately, Pokemon built a massive commercialized universe that a kid can sink money in to. It built it earlier too as I see wikipedia reads that the first DQM was released about two years and a half after Pokemon Red and Green.


I think this will be a good time to check out reviews on Dragon Quest Monsters: Joker.

Thanks! I just beat the Gate of Happiness, and I'm still trying to beat Temptation. I'm thinking about getting DQM Joker for the DS real soon (or Joker 2 if the us release date appears). I hope they're at least half as good as DWM.