The Phoenix Wright games have always been an enjoyable and bizarre style of visual novel that have overwhelmingly appealed to me despite generally ignoring the genre otherwise. When replaying the first three games, now out on Nintendo Switch in shiny HD style, I was trying to nail why these games clicked with me, even upon replay years after my first experience. If you’re looking for a traditional review, Matt Zawodniak covered it already. But here are the reasons I settled on as far as why I love this series, as well as a bonus reason for why I think the Switch version is the best way to play Ace Attorney games.

The whole game would fall apart were it not for a gripping translation, and with these first three entries, Capcom delivered a stellar localization. It all expertly nails the tightrope the original trilogy walks, between tragedy and comedy. You’re a spiky-haired jokey caricature that often has to investigate horrible murder cases to try to prove an unfortunate soul’s innocence. Law & Order episodes sometimes have more optimistic outcomes than Phoenix Wright cases. Somehow, through all the characters that are murdered and all the blood that is spilled, Ace Attorney is overly charming and sometimes legitimately hysterical. Characters have outrageous animations, weird tics, and delightfully tacky pun names.

That last point about the puns is another victory from the English translation. The original Japanese is dense with localized turns of phrase that had to be carefully changed to make sense to other territories. These first three games are a testament to the excellence of the localization. Although it will always be goofy how these games take place in “Los Angeles” in the American versions despite clearly being Japan. Sorry Capcom - it will always be weird and funny that burgers are somehow ramen. 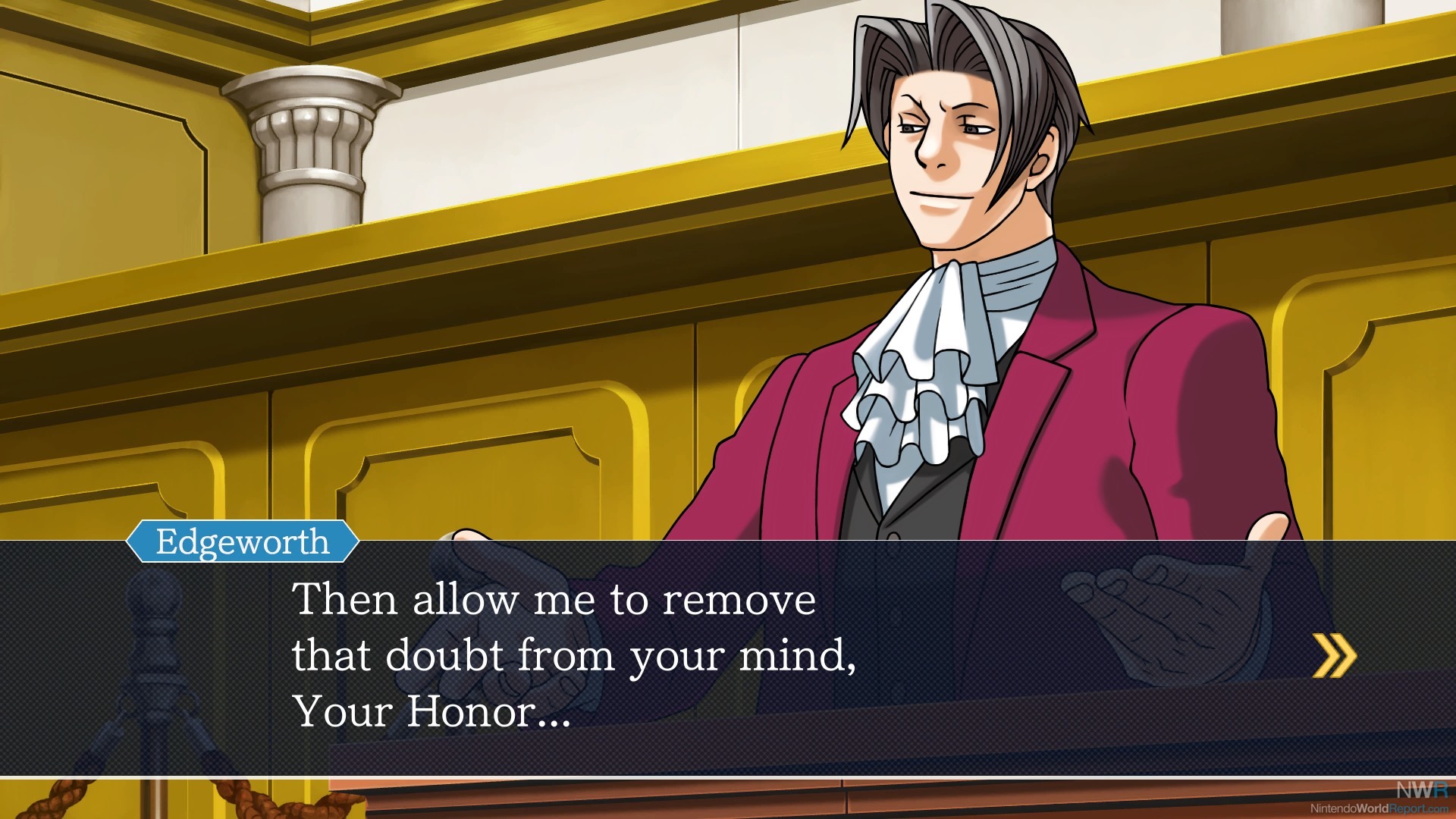 Most Ace Attorney characters only have a few animations. Somehow, those animations are more vibrant and memorable than almost any other video game character on the planet. Seeing the art of staples like Phoenix, Miles Edgeworth, Detective Gumshoe, and so many more in upgraded HD in the Switch release of the trilogy is an even better showcase of the minute detail that makes all of these characters burst with personality. The characters are numerous and oh-so memorable. It’s also, to some degree, a living breathing world. Character arcs that start in the first game pay off over the course of the trilogy, and minor characters often show up multiple times over the course of the series.

While telling a story through text and playful animated character portraits is the main drive in the Ace Attorney games, the way you digest those core tenets bounces between two core ideas: Investigation and Court. Investigation involves bouncing between different locations, exploring environments, and talking to various people. You build up clues and evidence that you take into the courtroom in the other gameplay style where you have to listen to witness testimony and present evidence or press for more info to get to the truth.

The cherry on top of the courtroom proceedings is how it’s sort of presented as a fighting game. When you mess up, your life bar goes down and Phoenix reacts like he just got knocked back. Similarly, when a guilty witness starts to crack, the screen shakes and flashes like you just nailed a huge combo or are the cusp of felling a big boss. If this was how all court proceedings go, I wouldn’t be complaining about jury duty. 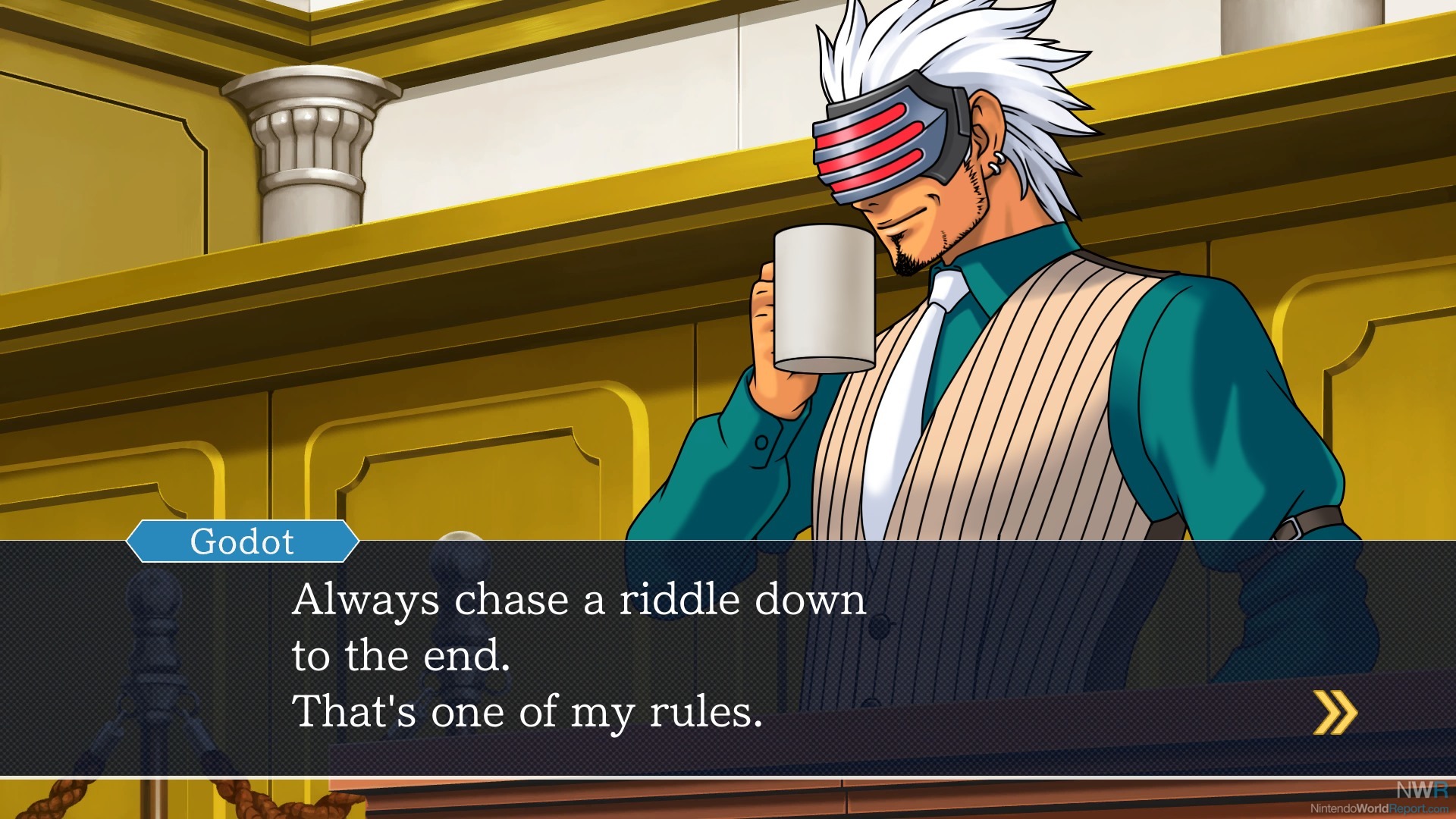 Why Ace Attorney Rocks on Switch

I’m midway through replaying the trilogy and I’ve bounced between playing on the TV and playing portably. I love being able to (finger snap) switch between both play styles. Before this release, I had only played Ace Attorney games on a 3DS or DS, so there’s a certain thrill of playing these games with their upgraded HD art on the big screen. Everything translates nicely and having the excellent, tone-setting soundtrack pulse through my sound bar is wonderful.

On the go, I like having the bigger screen for playing and it’s also great that the touch screen is supported. If you’re up for it, just take off those Joy-Con and sit back like you’re holding a tablet and enjoy your time with Phoenix Wright’s first cases, whether it’s for the first time or the umpteenth. Of course, the Ace Attorney Trilogy is on a variety of other platforms, so you can also get it there, whether it’s the PlayStation 4 or Xbox One (out at the same time as the Switch release), the original DS games (or GBA games if you want to learn Japanese), or the various other re-releases on iOS, Android, and 3DS. I highly recommend playing the Ace Attorney Trilogy even if you proclaim that you don’t like visual novels. These are special and well worth checking out. Now eat your hamburgers, Apollo.

Godot has got to be one of my favourite videogame characters of all time, despite only being in this one tiny portion of one third of the series.
Also, I didn't know this was set in LA. I can't look at Ace Attorney into it's eyes anymore.