The Poké Ball Plus: Cumbersome Yet Charming

The control methods of Pokémon Let’s Go deserve to be called out for being limiting and restrictive. Little to no customization exists here and the only way to play the game without any motion controls is handheld-only. All of these controls seem to be in service of the gimmicky addition to Let’s Go: the Poké Ball Plus. Available as part of a bundle with the game and separately, the Poké Ball-shaped walnut of a controller is imminently charming but also generally a mediocre way to control the game.

Nostalgia courses through the veins of Let’s Go and the Poké Ball Plus adds wonderfully to it. Resisting the urge to smile when I unsheathed this goofy little thing was difficult. Throwing the Poké Ball to catch critters takes a little getting used to, but it’s such a fun way to do a repetitive task in game. Just be sure to put on the wrist strap and finger ring to try to prevent broken televisions.

Problems arise when navigating menus. In some respects, it’s impressive how seamlessly you can navigate through menus with two buttons and a motion control. The way the Poké Ball Plus works is your confirm button (A or R) is on the control stick, which is in the spot where the button of the Poké Ball is. The clicky stick can be problematic; way more than once did I click in the stick only to move up or down a spot and select the wrong move or menu option. Typing in a name using this method is a mild form of hell. I could see the clickable analog stick being a little easier for those with smaller hands, but it’s still easy to slip slightly and screw up your strategy. 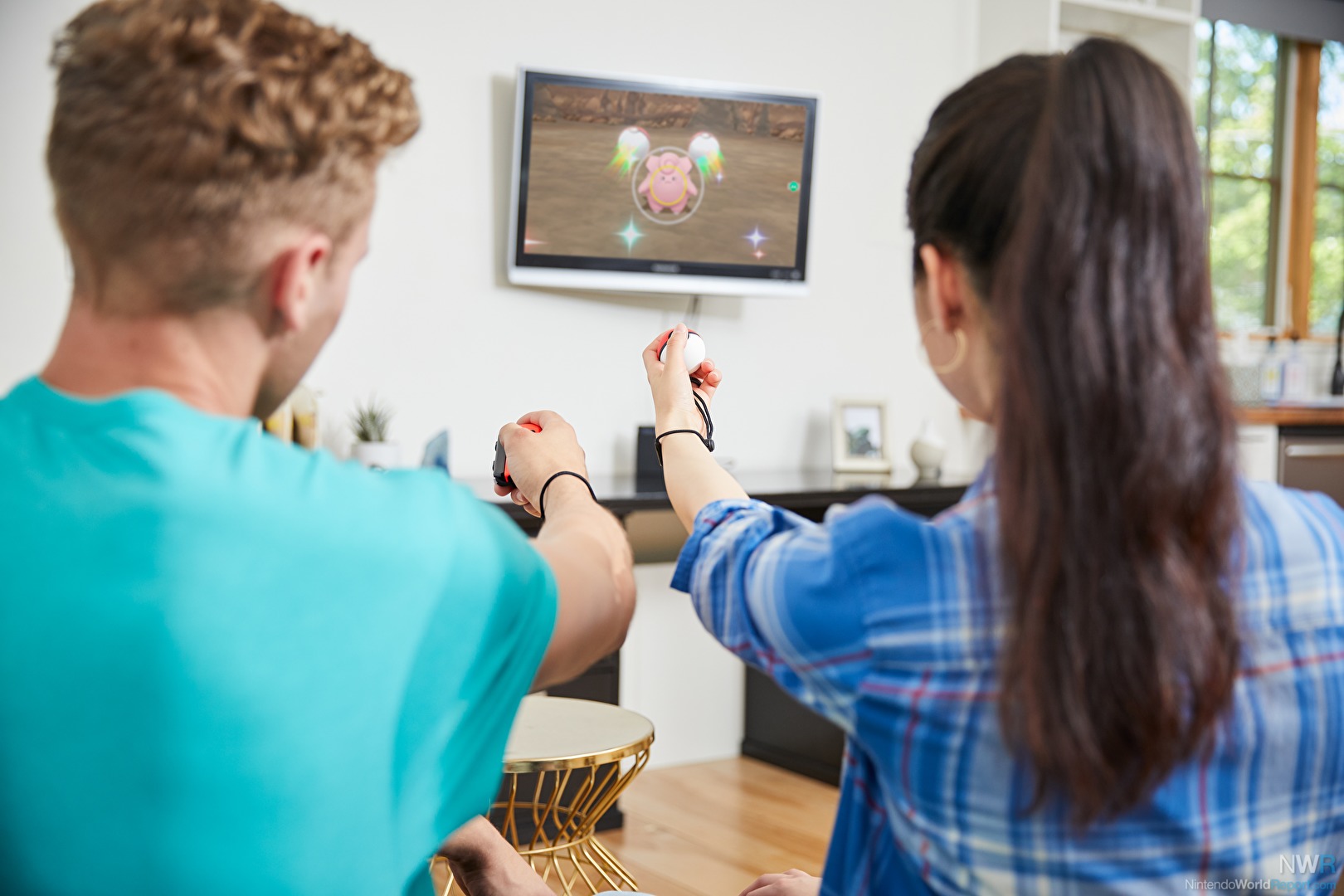 The B button is on the top of the ball, placed in a spot where it’s natural to hold it with your thumb on the analog stick and your pointer finger on top. I had no beef with this button. It did what I wanted it to do basically at all times. The last functional input method is shaking the ball. You use that for catching a Pokémon, but it also represents the Y button elsewhere. Once I got into a rhythm of using it, I actually really enjoyed jaunting through my Pokémon box shaking my Poké Ball and using the two other buttons to sift through my crew. Sure I’d accidentally click on the wrong option sometimes, but it was simple to do with one hand. However, hopefully whenever you use this controller, you don’t have to be silent. The Poké Ball Plus makes noise while using it and unfortunately, it can’t be muted. No matter what, your controller will make the noises of attacks, attempted captures, and Pokémon.

Outside of Let’s Go, the Poké Ball Plus can be used in two other ways. The simple one is using it like you would a Pokémon Go Plus in Pokémon Go. It’s easy to connect, though I noticed specifically on my Pixel 2 that it would disconnect every time I used my phone to take a picture. That’s probably more a “my phone” issue than a “Poké Ball” issue, though. Additionally, you can bring a Pokémon from Let’s Go with you for a stroll where they collect candy and experience (though you can’t do this and connect to Go at the same time). This is adorable because you can also play with the Pokémon in this mode by shaking the ball and nudging the analog stick. It’s notable that the depths of using the Poké Ball outside of Let’s Go are ill-explained. Most of my knowledge about the ball came from Googling it and finding comments online and Nintendo’s support page. The game explains virtually nothing other than the fact you can take a Pokémon for a walk with you. When used outside of Let’s Go, it can be muted, which is a good thing because when a Pokémon is on a stroll with you, the Pokémon will randomly “call out” to you, which can be harrowing if you’re, say, in a quiet environment and your Magikarp starts whining and then you have to explain why a bizarre blinking Christmas ornament is in your pocket and you’re shaking it. (Side note: the Poké Ball Plus would probably make a decent Christmas ornament) 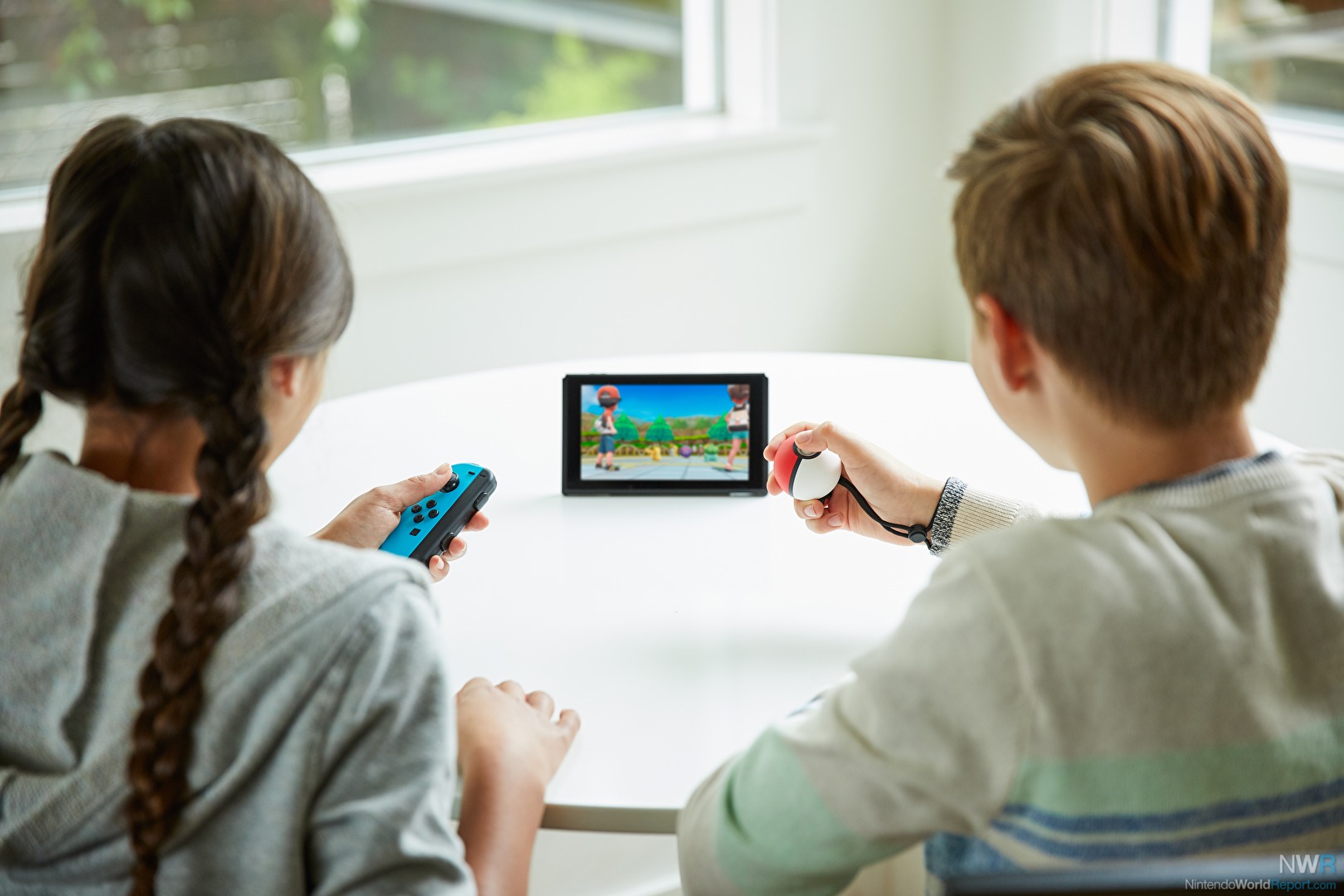 In general, the Poké Ball Plus has trouble communicating information to you. My ball couldn’t connect at one point and I had no idea why. I thought it was broken. Actually, the battery was low. Thankfully, when you plug it in, it makes the noise of a Pokémon Center to assure you it is charging. If you happen to have it connected when on the Home menu, you can use it there too, but it’s not very functional since you can’t access the Home menu with just this controller. You have to use Joy-Con. You can’t even use a Pro Controller for this option since the game doesn’t recognize Pro Controllers.

The Poké Ball Plus is adorable and when it worked in game, it brought me lots of joy. It also made it easy to play one-handed, which can totally be taken in the absolute wrong way, but I’ll have you sick people know I played a ton of this game while holding my 5-month-old son. He cooed at the noises and was generally chill about the experience of being an accessory to the Poké Ball Plus. Thankfully he can sleep through the noises the Poké Ball Plus makes and also I was able to do the throwing motion without waking the baby.

This is a flawed, limited controller, but as long as you accept its restrictions and play within its constraints, it’s great for Pokémon Let’s Go. Unfortunately, who knows if you will be able to ever use this in a video game again. I’d hope a $50 accessory can be used in future Pokémon games, but my Pokéwalker is glaring at me telling me not to get my hopes up. My feelings on the Poké Ball Plus are decidedly confused. I love playing with it but it’s also frustrating to use. I recommend it only if you can find immense joy in shaking a thing and hearing it make the noise of a Bulbasaur.

For those only interested in Pokémon Go, I still recommend the Gotcha.