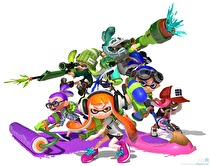 I spent hours battling for my choice of pet. I lived and died by the cat and sprayed ink everywhere. I slowly climbed the ranks to Cat King, and won a good majority of my matches against those lowly dog supporters. I left knowing I gave Splatfest my all and had high hopes of winning.

Then, the results came in: 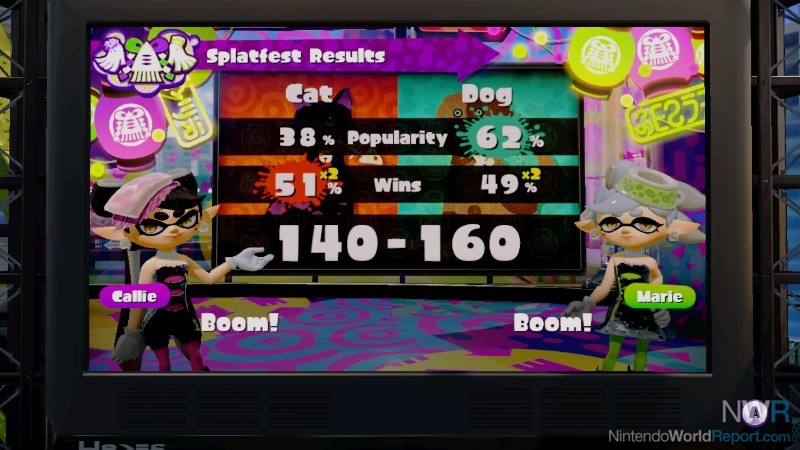 As we can see here, the Dog team won even though they didn’t win as many matches as those fighting for Cats. This truly pisses me off, but not because my team lost. The problem is that the results of this Splatfest are so heavily weighted on popularity that players in the future will no longer pick what they want to fight for. If anything, the first Splatfest has taught me to join up with the side that I think will have more people voting for it since they will be given a huge advantage.

The results here are not unique to North America either. For every Splatfest that has taken place in each region, the team that had the highest Popularity vote ended up winning, further supporting my analysis. So what am I fighting for?

I’m bringing up this flaw in the Splatfest design because it’s something that needs to be adjusted in the future. I don’t know the best way to fix it, but the Popularity points either need to be reduced significantly or removed all together. When I’m fighting for a side in Splatoon, it should matter. If this issue isn’t fixed then I’m sure there will be some sort of collusion by different online message boards to make figuring out what side to vote for fairly simple.

There are some other smaller Splatfest issues that I should mention here too. I was upset that I could only participate in the Splatfest during the event period. There was no way to join friend matches during Splatfest, or even do ranked battles. It made the game feel a bit limited, and I don’t know why I can’t join a friend’s cat team if we are both supporting the same side.

Overall, Splatfest was enjoyable, but changes need to be made in order to keep the experience fair and the fights meaningful. I hope other people spread the word because if something isn’t fixed, future Splatfests will end up sucking. For now, though, I will be able to rest easy knowing that Cat fans are better gamers than Dog lovers.

The popularity score is there to deal with the problem that when one side in Splatfest can't find any members of the opposing team, the system grabs the next available team from the same side and throws them in a match that "doesn't count" in the Splatfest tallies. So in my case, I probably spent at least half of my matches fighting OTHER Team Dog people in that contributed nothing to the overall score. Meanwhile, probably EVERY match Team Cat had was against a Dog team, so all THEIR matches "counted." The popularity score helps balance against that problem, and is only really a factor if the 2 sides were even in the win/loss category, as Cat/Dog was.

Do you not notice the x2 multiplier under the wins %? Wins count twice as much as popularity does. Dogs only won by 20 points. And that's because the win % was extremely close but the popularity of dogs was much higher than cats.
Also: "For every Splatfest that has taken place in each region, the team that had the highest Popularity vote ended up winning."
In the first Japanese Splatfest and the European Splatfest, the win % was higher for both teams that won. They didn't win purely on popularity.

I was posting my little rant about this issue the other day on Miiverse, and while some of the issues were mentioned here, there are a few more I'd like to bring to light. The first is connection issues. While nintendo was able to keep the matches run smoothly, they clearly didn't get everything fixed before Splatfest kicked off because I had AT LEAST 20 matches with either one or more people missing from either side. I know I had a few matches where it was just me, but this was really bad for a big event. Now here's one thing that intrigued me a bit. Since we had 4 people set up on each side, it felt to me as though this was a live test of the premade 4 people teams coming in the update in august. This worries me though, because if there are going to be connection issues like this when people are allowed to make teams, nintendo's going to get a lot of shit for this. Now lastly, this is something I felt as though it should have been there from the start, which is a gauge of some sort in inkopolis that shows which side is winning in splatfest. After I got my rank maxed out, I didn't know if I could contribute more points to help my team out. So I basically stopped after that. Whats also worth noting is that while it was nice to FINALLY get three maps in the rotation, the entirety of splatfest got stale for me after halfway through, because I couldn't figure out why they wouldn't rotate the maps. What really pisses me off is that they took the three maps feature out at the end. If this was done to keep ranked battles balanced, then so be it. Keep that mode to just two maps, but keep turf wars at three now. We certainly have more than enough maps now to do so. Also the popularity factor is complete bullshit.

Justin, could you let me know which kind of ramen is going to be most popular on the Japan Splatfest? Cheers!

Everyone on both sides got an adequate amount of Sea Snails, which is what ultimately matters from these things.


Splatfests are already splitting up the player base in 3 parts, and giving people the option to not participate in them (it's just a 24 hour period) only makes it even harder for people in the Splatfest to find matches.

I don't really care about taking sides. What i really like about Splatfest is that it locked people regionally so now i wasn't matched with people from the other side of the word.

Yeah, and you know what? I'm pissed about how the losing side still benefitted from their efforts. Why don't we just make it so the losing side doesn't get any sea snails? Screw anyone who just wants to have fun with the game.

There's one mode in Splatoon that is seriously competitive- turf wars are what the Splatfest centers around, and so a certain level of reward is granted to everyone and the results are never certain. If you care this much about the severity or the balance of an event that's supposed to be celebratory, I think you're missing the point. Splatoon is supposed to be fun, I think.

I don't really care about taking sides. What i really like about Splatfest is that it locked people regionally so now i wasn't matched with people from the other side of the word.

This. Matches went a lot smoother with less player dropouts than ever. I didn't realize how good I was at this game until Splatfest. Now it's back to playing against seemingly unbeatable Japanese players that can swim in my ink.

Everyone on both sides got an adequate amount of Sea Snails, which is what ultimately matters from these things.

I wouldn't call me getting 8 snails while anyone who got "Dog Champion" managed to get 16 'adequate'. (especially when cat royalty only got a measly 2 snails over the dog champions.)