Trying to Understand Monster Hunter: Why the Insect Glaive Is Super Rad

You want to mount monsters? You can do that easily with this weapon. 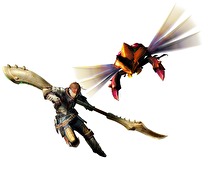 Every so often, I poke around to see what other people are saying about Monster Hunter 4. There are some people that are experienced with the series that seem to be speaking a different language. While I'm totally gripped by the single-player campaign in Monster Hunter 4 Ultimate, my knowledge of the metagame and the hardcore post-game portion is limited. So, when I elucidate about different weapons and strategies, just know there is a chance that I'm wrong. However, I’m relatively positive that the Insect Glaive is incredible and I think you (yes, you) should totally use it.

The beauty of this staff-like weapon is that it fuses melee and ranged attacks in interesting ways. Up close, you can pummel monsters with simple combos from the staff. From afar, you can fire off your Kinsect to do some damage and get you "essences." These different essences gives you buffs in the heat of the battle ranging from improved stamina to improved damage. As you learn the ins and outs of each monster, you can cherry-pick what essences you want to draw from to get the optimal boost. 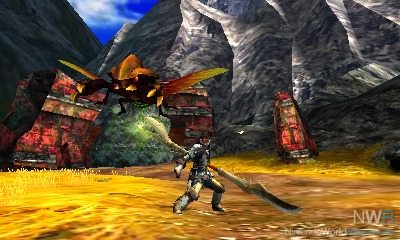 The hands-down best part about the Insect Glaive, at least where I am in the game, is the vaulting capability. One of the new aspects in Monster Hunter 4 is the ability to get vertical and mount enemies. While you can't jump by default, you can leap off of cliffs and land on top of enemies for major damage. With the Insect Glaive, you can vault at any time to get the high ground on your foe. It's an easier way to try to mount enemies that comes in handy when you're trying to get the upper hand on one of the countless sons of bitches you fight in the adventure.

Before the Insect Glaive, I used the Dual Blades. I loved how quickly you could attack, but they are on the weaker side. I also messed around with the Charge Blade, but I felt it wasn't as quick as I wanted to play. I want to toy with one of the guns at some point, but I don’t think I want to give up the down-and-dirty play style I’ve developed.

What weapons are you using in Monster Hunter 4 Ultimate? Are there any really neat ones I should check out? I want to know. I love this damn game.

Light Bow Gun. Ever been frustrated that the Nerscylla is hanging just out of reach? Now you can shoot that SOB down.

I haven't bought MH4 yet, but the Insect Glaive still looks really fun. When I do buy, I'll almost certainly pick it as my primary weapon.

Light Bow Gun. Ever been frustrated that the Nerscylla is hanging just out of reach? Now you can shoot that SOB down.

I liked Light Bow Guns in MH3, until using Bows on the PSP and Wii U games. Haven't looked back since - the ability to stay highly mobile and do damage from range is great, unlimited ammo and alternate fire modes (Wii U only) were icing on the cake.


That said, the Bow does have some issues - it relies pretty heavily on elemental attacks and bow coatings to do enough damage at higher levels, so you end up having to maintain, upgrade, and switch between at least 3 or 4 different Bow types. On the upside, if you are good with the Bow then you rarely need to upgrade armor until getting to G-rank quests.

I've also never been a Monster Hunter guy, but my wife and I downloaded the demo and played through it on Saturday. We then ordered our copies, but we're still waiting so I really appreciate articles like this cause I've been gathering tips while I wait with the hope that it'll make the game easier to pick up once it arrives.


Do you have to spend time in the single player part or can we both just boot up local multiplayer when it arrives and play it strictly local 2 player?

This is good to know. I haven't settled on a weapon yet, but I tend to prefer ranged combat, so this sounds like something I should try.

It seems like every new weapon they add is more complex (and thus seemingly more versatile) than the previous ones, kinda makes you feel bad for using any of the older weapons (especially with weapons like the lance vs gunlance and hammer vs horn that have the same listed damage). I'm currently playing with the new axe thing since I used to main switchaxe in MH3 and something made me think the new axe is 3 weapons in one instead of 2. I'm not sure it fits my style though, with the switchaxe you had a heavy weapon as default while the new axe is a light weapon until you transform it so going from running to heavy hitting takes longer. Sword and shield form just feels too damn weak and I'm not used to blocking anyway so my reflexes are for dodging, not blocking.


Is the glaive a blunt weapon? So far I've switched to the hammer when I needed something blunt.