Why Neal is psyched to get the first Ace Attorney games on his 3DS this December.

The Phoenix Wright: Ace Attorney Trilogy is coming to 3DS on December 9 and despite the fact that I've played two of the three games already, I'm actually incredibly excited for this collection to come out.

One barrier for the Phoenix Wright series that I've discovered over the years is that sometimes the games can be hard to find. I know I had to track down my copy of the original across several stores in my area, I only played the sequel because I had a friend who I could borrow it from, and I never played the third one because I couldn't find it cheap enough. Years passed and I just fell off of the Ace Attorney series altogether (though I did review Ace Attorney Investigations, which is fantastic). 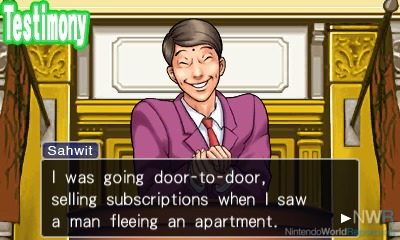 I'm also at a point where enough time has passed since I played the first two Ace Attorney games that replaying them would be more like re-reading a beloved book then laboriously going through the motions of a linear video game. I forgot how goofy and endearing the initial Larry Butz trial was in the original while playing the demos.

I know people might complain about the price or that there isn't a physical version, but to me, the $30 price point is fine considering that, even now, you'd have to drop about $45 to get all three on DS. Plus, the eShop version ensures that players can always get their lawyer fix whenever they discover Phoenix and company.

I hope I’m not alone in my anticipation for more Phoenix Wright games. Now let’s hope that crazy one with Sherlock Holmes in it makes it over quickly…

Note: Subsequent research shows that it looks like Capcom reprinted the original three Ace Attorney games on DS. I don't think I'm totally insane; those games were very hard to find in like 2007/2008. Also, I know they're available on iOS and junk. I just would rather play it on my DS/3DS.

Neal, the games have been available as WiiWare for quite some time. At $10 a piece it was a cheaper alternative for me when i couldn't find the 2nd game and didn't want to pay $17 for the third. They even slightly implemented motion control as a way to use your objection finger. That being said if you've never played the games, or if you prefer handhelds the 3DS collection sounds fantastic.

The WiiWare versions are garbage. I don't know who would want to play a GBA game on a home console anyway, the borders are obnoxious as well, and of course the 3DS compilation has noticeably higher resolution and 3D.

I have to wonder why it took so long to bring this over considering the Japanese version includes the English localization and even allows you to keep one save file for every game in both English and Japanese. Guess it took them time to remove that feature from the Western release.