10 Questions and Observations About the Duck Hunt Duo in Super Smash Bros. for Nintendo 3DS and Wii U 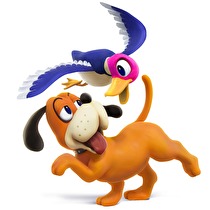 1. How hard was it to create a character based on a semi-realistic dog? I mean, he literally runs, sits, paws, and pants like a realistic dog. It’s as jarring as it is adorable.

2. When the dog picks up a Home Run Bat, why does he stand up on two legs and swing it like a human, but when he grabs a Pokéball, he uses his mouth?

3. The dog’s new design is so wildly different from his old Duck Hunt design that he looks like a new Nintendo character. In a weird way, it almost feels like Smash 4 is introducing a new member of the Nintendo family. I mean, before this, he was nothing but a background character and a joke for people to make fun of. “Haha, that dog was always such a jerk. I wish we could shoot him instead.”

4. If you zoom in, the can he kicks in his B move is labeled “Hogan’s Alley.”

5. Where did they get those Wild Gunman sound effects? Did Nintendo rip them from a cartridge or remake them for the purposes of Smash?

6. The duo’s new artwork is brilliant and heartwarming. I love how the duck and the dog are looking at each other like, “Hell yeah man! We got this.”

7. I think it is super smart to make the duck, dog, and gunman collaborative Smash partners. You really couldn’t get away with a dog holding up a duck carcass in 3D.

8. What is the gunman’s job off-screen as he fires during the duo’s Smash attacks? Is the dog directing the gunshots, or is the gunman actually aiming for the duck and dog but missing every time thanks to the dog’s careful misdirection?

9. Their up-B move with the duck carrying the dog by his behind is one of the cutest things I’ve ever seen.

10. What are the chances of a new eShop Duck Hunt game that adds context to the revitalized character? The GamePad could be used as a cool Wii U shooting mechanism for a 360 degree field of view, or it could be used with the television screen as a Game & Wario-style zoom.

I wonder where Smash goes from here with cool NES guest characters. Who would you want to see? Excitebike? Urban Champion? Are you as fascinated by this character as I am? Sound off in the comments!

Thanks for the fuckin spoiler in the goddamn title, ass.
Really, you couldn't have kept the title spoiler free, or alerted us?

Thanks for the fuckin spoiler in the goddamn title, ass.
Really, you couldn't have kept the title spoiler free, or alerted us?

Sorry homie. I tried to keep his artwork under wraps. I'm a little surprised people don't know he exists, but I apologize if you got screwed over in the process.

Ah shucks, it's OK. You're alright. I look forward to re-visiting your article when I unlock the characters (which I am now looking forward to also).