Shovel Knight Might Have the Best Use of StreetPass

Honing your strategy and watching your Knight duel against StreetPassed foes is awesome.

The concept for StreetPassing in Shovel Knight always seemed really interesting. Inspired by games such as Mario Bros., it works by recording three rounds of your own Shovel Knight making movements around map collecting gems and trying to defeat an invisible foe. When you send that recording out to the world, you swap it with other people's recordings, and then your pre-recorded characters duke it out in a best-of-three match.

Fortunately, I got to experience a ton of Shovel Knight's StreetPass Arena firsthand at TooManyGames 2014. It was amazing to watch, making me overly enthuiastic for StreetPass for the first time since last year's introduction of the new StreetPass games. As you quickly learn when you get your first StreetPasses, your strategy might be dumb. I learned that, not knowing I could even magic in the StreetPass matches. My little Knight, jumping around stabbing the air and trying to collect gems, had a pitiful debut. 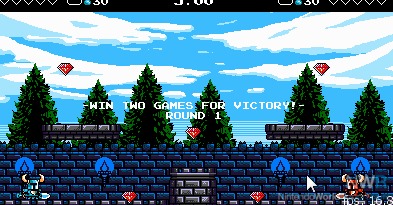 Then I went back to the drawing board. I realized people linger slightly in the opening of these matches, so I sent off a quick fireball to open up every match, which turned out to be a devastating manuever. Some folks were wise to that trick, though, and would jump over it or use the Phase Locket. Then, it's off to the races as you hope your recorded Knight stabs the air at the right time to defeat the other player or collect the more gems before time runs out. It's exhilirating to watch because while you might know your exact movements, you have no idea what the rival player is going to do. It's a tense competition that doesn't have real-time interaction but is still fascinating to watch.

Over the course of my two days at TooManyGames, I watched more than 30 StreetPass duels, tweaking my strategy after each batch I studied. While, thanks to the unfortunate difficulty of getting regular StreetPasses, I don't expect to be embroiled in Shovel Knight duels all the time, I'm looking forward to the PAXs and the New York Comic-Cons of the world where I can match up against other players, tweaking my strategy as I go.

Unlike most of my games I have active for StreetPassing, I will go back to Shovel Knight's because it's something fun to watch that, even when you're finished the game, is still compelling.

My main problem with most Streetpass material is that it relies little on the interaction of two players. In Fire Emblem, you are fighting the player's investment of time in the game, not their actual strategy or play style.

This is a pretty interesting idea for Streetpass, and I'd love to try it out. But, the 3DS buttons are terrible so I'll avoid it.

I am always interested in asynchronus multiplayer, so this sounds really cool.

Sounds great but I rarely ever Streetpass with someone, let alone someone with the same game (not do I usually remember to check Streetpass enabled events in my games). For the way I play my 3DS, it's just not enough to sway me from the Wii U version. There's just something classic about playing a game like this on a big TV. Some say the low res art helps the 3DS version but it just looks so much cleaner on the TV, and you can see every little detail. Love big chunky pixel art.