What to Announce When You're Announcing

Read this article for a major surprise announcement. 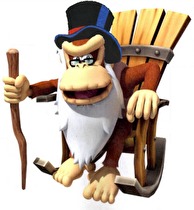 I'm eternally unable to finish writing anything unless I find it utterly perfect. This almost always results in long writing cycles and discarded works. I've decided to challenge myself, in an attempt to break these barriers. My intent is to write small essays (limit of 300 words) about topics I’m not inclined to write about. Hopefully this process does not cause so much mental anguish that I never attempt this again.

Six hours after gaming's biggest self-congratulatory boondoggle, one thing trends on Twitter. Well, two, but we aren't going to participate in encouraging Joel McHale's continual trolling of industry members that, for some reason, pay him to do so.

Perhaps we, as game journalists, bear some responsibility for allowing this kind of rampant speculation to continue. In no way was Nintendo going to make a major announcement at VGX, but perhaps Cranky is trending because this is what you wanted. Nintendo couldn't have imagined Scrooge McApe was worthy of such an onion of announced announcements. And while I’d like to speculate that Reggie just wanted to be a troll, it’s slightly out of character for him.

"My doctor said to avoid the yokes."

We certainly don’t like to speculate about announcements because we like being right; if that were the case then RFN would cease doing prediction segments. No, I think we’re so starved for the unknown that anything, any little tidbit that this industry can surprise us with, gets us all atwitter (pardon the pun). Even the arrival of a new console generation has not delivered on meaningful surprises.

What is more shocking: another Dead Rising or another Killzone?

The correct answer is another 2D platformer from Nintendo.

Oh wait, they already announced that.

I was totally expecting something Bayonetta 2 related- like a demo of something cool like a new multiplayer mode or something, just SOMETHING, that would grab the Spike TV demographic by the balls, and COMPELL them to buy a Wii U, probably the biggest missing demographic chunk that Nintendo's been missing by a mile since the N64.

y u do this

I think Scrooge McDuck gonna sue somebody, that's what I think.

The words 'announcement' and 'speculation' have now lost all meaning.

Also, I will fully encourage Joel McHale trolling on the dorrito pope!

I chuckled at the Reggie in the grocery store bit. Another great write up James. I dig this one better than the last and I agree with your opinion about gaming culture and speculation. With us fans talking to each other 24/7 about our favorite hobby and the sheer amount of information we are privy to as it's just breaking, it's no wonder we are always starved for something new and exciting to latch onto.

BTW, posting from my phone has become real tiresome with these pop-up adds blocking half the posting space.

I was hoping for new trailer for smash with new character

Honestly, I wasn't looking forward to Reggie's announcement at this event. I didn't expect anything at all.

Somebody demote him to Prince!

I should have included a screenshot of Twitter at the moment the "grand reveal" happened. It was sadlarious.

Nintendo treated it like an average Nintendo Direct segment. They were never going to blow anyone away with their announcement. They figured they'd have their 15 minutes of Nintendo-chat (because even they realize that Nintendo has long since worked itself in to its own corner of gaming), and promo'd the next game on the release calendar. The real news was the Samus pin.