My Legend of Zelda Experience at NYCC 2013

The Legend of Zelda has the best fans. And that's a fact! 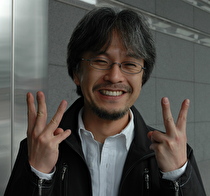 At New York Comic Con 2013 I had the pleasure of going to The Legend of Zelda: Link Between Worlds panel. It was a fantastic experience to say the least.

During the whole con I was pretty under the weather and was popping pills to keep me awake and alive. Luckily, I had two pills left when I first got in line. As the line progressed, and I made my way closer to the room, I felt the cold hand of death on my shoulder. As I reached into my bag I realized I was out of water, leaving me with nothing to down the pills with.  But then some nice girl saw my plight, put down her 3DS, and offered me some of her water. Already this panel was showing me the good in Zelda fans.

As we made our way in I saw fans of all ages, shapes, and sizes. Young kids dressed as Link, hoping to get a glimpse of the new game they would be getting for Christmas. There were the “hardcore” Zelda fans that I overheard talking about the overwhelming evidence scattered through previous Zelda games that suggested that Majora’s Mask 3D was in the future. There were even some people playing Pokémon X and Y a day early (lucky!) and were there to absorb any and all Nintendo information they could. And then there was me. Stuffy, tired, and holding on to dear life all to hear about the brand new Legend of Zelda adventure.

As I sat down I could feel the unbridled joy and anticipation that filled the room. As the noise started to swell a figure emerged from behind the projector screen. He was majestic. He controlled the feelings of the entire room with every gesture he made. He was Eiji Aonuma. The sight of him incited cheers. The man responsible for the new wave of The Legend of Zelda titles had appeared before us and he was just as excited as we were.

After the presentations and breaking news, Aonuma welcomed a few questions. In the 15-minute slot he only answered three people. I was number four, but some butt-head decided to ask needlessly complicated questions that everyone knew Aonuma couldn’t answer. Oh well. Live and let live, right? Aside from that one guy, everyone in the room was nice, almost to a fault. People allowed entire rows to exit the room before them. Aonuma and the rest of the panel took pictures with fans dressed as their favorite characters. Aonuma even played with a little Toon Link doll during the presentation. (It was adorable. Don’t ask me how, it just was.) The whole experience was phenomenal. One thing fact that will ever be solidified in my mind is Zelda fans are some of the nicest fans out there. Except for that one guy. What a butt-head.