Along with other things, Luigi's mansions are haunted by money.

At a certain point in Luigi’s Mansion: Dark Moon, if you look up, you can see a stack of crisp bills perched on the gnarled branch of a tree. The green clump is perfectly uniform, and piled high enough to rival the branch’s thickness.

Like any of the other stationary mansion objects, the tree’s branch is something made available for you to poke, prod, rustle through, and peer into as you investigate the ghostly goings-on. Sometimes you stumble across a mischievous ghost haunting the drawer of a dusty bureau or crooked-legged hallway end table, and that’s its own sort of reward. But what shakes out is often just money, and quite a lot of it; the most timid of Luigi’s jostles can send gobs of cartoon currency blasting out like so much expensive confetti. Coins and bills, gems and pearls and heavy bricks of gold: they’re crammed in the mansion from the rafters to the floorboards, and all gobbled up with ease by the little red vacuum.

Finding thematic justification for the injection of all these riches into the game doesn’t require much in the way of mental calisthenics. It might stand to reason that a mansion, however haunted, might yet hold some secret fortunes of the deceased within its crumbling walls and odd hidden spaces. And with the game wearing its comic inspirations on its sleeve, it’s a little easier to accept the monetary rewards it dumps on players as appropriate for the task of besting a mansion’s clever devices.

vrrrrrNGGGGGGGGGGGGGG. From under the tree, you can suck bills off the top of the stack one by one—fwip fwip fwip—until the whole pile explodes, fluttering down slowly until you huff them into the infinite storage of your novelty appliance.

Even for a series that has already established extravagant forms and sums of money as a lighhearted reward for lighthearted deeds, and for a parent brand still very much invested in having players collect coins to no end, the stack on the tree just seems like a lot. And explicitly so. A fat old lump of no-nonsense cash. It's offered unto you under no real pretense of ingenuity or effort, as though it were the thing you were supposed to find all along. Just point and suck. 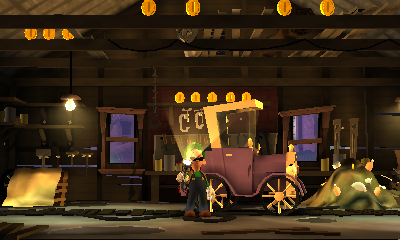 Your collection of paper and gold for each level fills a meter that ticks down to new versions of the very equipment you use to probe the mansion for more loot (and, on occasion, capture ghosts).The vacuum is as much a tool for grabbing money as it is for cleansing any room of its ethereal tenants; sometimes, more so.

A fact: The assorted currency tucked within the nooks and crannies of each mansion handily outranks its number of ghosts. The game’s slight preoccupation with this type of tangible reward is an innocent one that can encourage inquistive play, but can also distract from its less superficial qualities.