Check out the English version of Kirby's 20th anniversary collection. 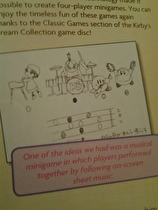 The English version of Kirby's Dream Collection came in today, and while you'll have to wait a little bit for the full review of the game, which includes Kirby's Dream Land 1-3, Kirby's Adventure, Kirby Super Star, Kirby 64, and more, you can take a peak at the included contents here.

Kirby's Dream Collection already came out in Japan, and you can also check out Danny Bivens' unboxing of that version. As far as I can tell, it's the same thing outside of some packaging difference. 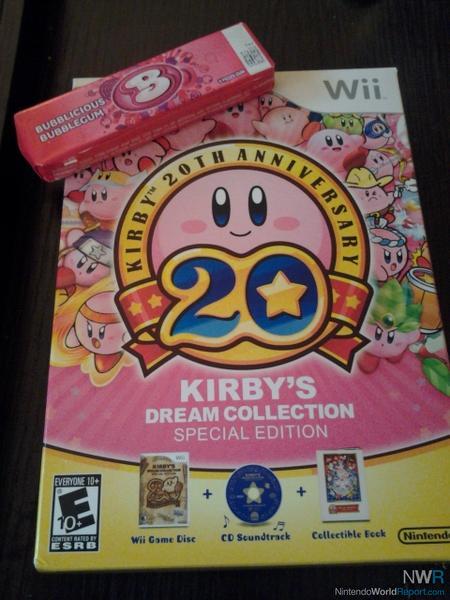 Here's the package you'll see in stores, complete with bonus bubblegum that Nintendo of America sent us to highlight Kirby's pink color and their record-setting PAX event 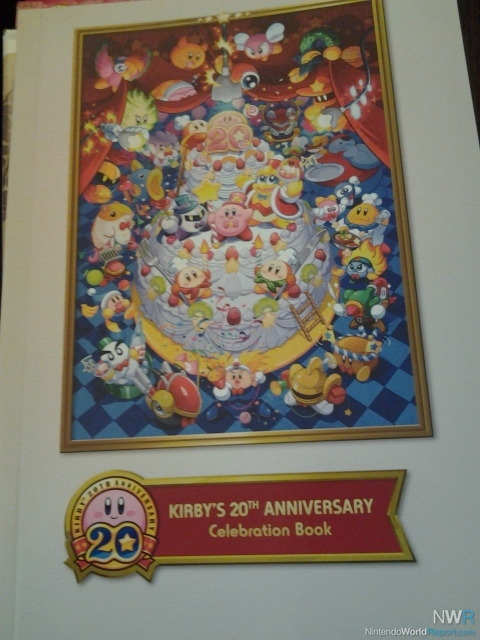 Check out the cover of the included booklet, which is kind of awesome. It goes over every Kirby game and offers some cool factoids about them
Check out two pages from the booklet, both focusing on Kirby's Popopo origins 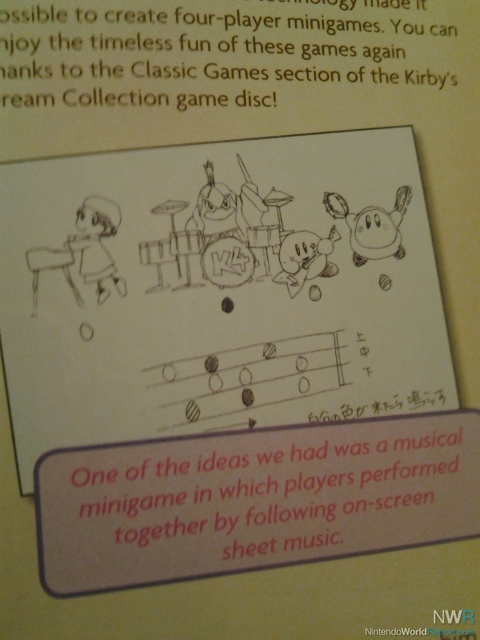 Here's a fun fact from the booklet: look at the Kirby Four (or whatever they might have been called) 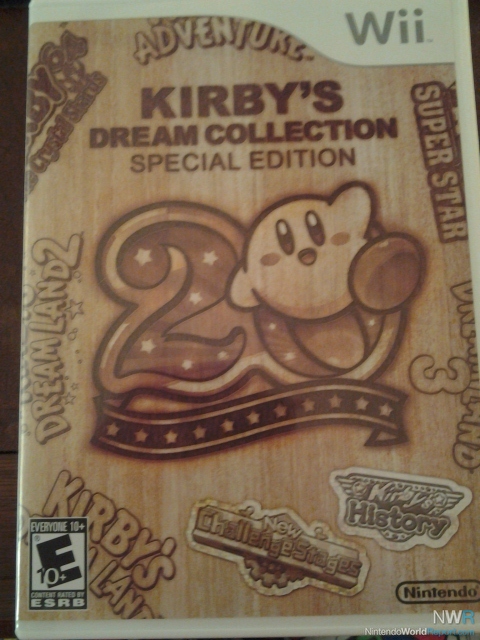 Damn, that is nice. Makes it more tempting.

Good thing I preordered this. This package looks loads better than the Mario 25th anniversary collection.

Yeah, from what I can tell, this looks almost exactly like the Japanese version minus Japanese. This is a good thing, though! It's leaps and bounds over the Super Mario Collection.

I call this "The Money Printer".  Or "Hey, look, people are buying a Wii game!"

I've been on the fence regarding this compilation, but I think I may have to pick it up.  It's hard to turn down given the nice packaging, extras (soundtrack!), and the games that are coming with it.

That, and Kirby is a series I haven't played much of (Kirby's Dream Land 2 and Epic Yarn are the only two i've played).  What a good way to reacquiant myself with this franchise.

After spending an hour or two with the game last night, I'm thinking it's totally worth it unless you happen to own every Kirby game on Virtual Console. I only own Kirby's Adventure and 64, so it feels more worthwhile. The Challenge Stages are real cool, and the history section is neat.


Full review (in some form) coming soon, but it seems to be a good collection and tribute.

I have one question, I've seen pictures of superstar being pretty dark. On the Nintendo website super star seems really dark compared to the other screenshots to the other Kirby games. Is superstar darker

I call this "The Money Printer".  Or "Hey, look, people are buying a Wii game!"

Metroid Prime Trilogy alone is running for about that much these days. The others are sure to go up in value as well. When Nintendo comes out with a Limited Edition or special edition of anything, it becomes extremely valuable and rare years later.

Uncle Bob, I bet the sum total of your Nintendo collectibles over the years is worth a tidy sum.

Metroid Prime Trilogy is about $70 used, Zelda is about $40 used, Mario is about $30. If Nintendo charged $100 for all 4, it would cause those others to drop in price.

That's used. To buy them new its a lot more than that. And also $70+ isn't far off from $100, and eventually it will hit that because they are only getting harder and harder to come by.

Metroid Prime Trilogy is about $70 used, Zelda is about $40 used, Mario is about $30. If Nintendo charged $100 for all 4, it would cause those others to drop in price.

Nintendo makes nothing off used and - from those titles - nothing off new (with the exception, of course, of the newly released Kirby collection).

At least with Metroid Prime Trilogy, I think the main reason people are buying it now is because it's a collector's item. If they make more of them, I don't think anyone will be interested, since the game sold poorly to begin with. It's hard to say though as the game has always baffled me.

It didn't sell poorly, not really. Even before it came out Nintendo said they would only print a limited number of it.

UncleBob, I am well aware of that. I was just pointing out that used prices for those games would (thankfully) drop sharply if Nintendo did that.

I know it had a limited run, but I recall stores having trouble selling the game even for the marked down price of $20. Clearly it wasn't a sought-after game when it was released.

It only became difficult to find after Nintendo made the discontinuation announcement.

At least with Metroid Prime Trilogy, I think the main reason people are buying it now is because it's a collector's item. If they make more of them, I don't think anyone will be interested, since the game sold poorly to begin with. It's hard to say though as the game has always baffled me.

Its a possibility Nintendo could re-released Metroid Prime Trilogy, but if they did I don't think it would be in the steel collector case like the Limited Edition was. It would just be in a flimsy plastic case like normal Wii games, and possibly with some Nintendo Selects coloring to it. It wouldn't be as highly sought after.

I think more likely what we will see happen is it will come to the Wii U's digital download service. Possibly with HD enhancement and Accomplishments supports. Sony does this sort of thing quite often with their old PS2 games on the PS3, so if Nintendo follows that template we can expect something similar. But obviously since digital downloads aren't tangible or transferrable they can't be collectible. They will not diminish the value of the collector's edition in any way.