They've become a part of her character. Accept it and move on.

You rarely hear cries from the readers, much less the artists and writers, that Power Girl’s characteristic bust be toned down or that her trademark “cleavage window” be closed. It’s not often you read magazine articles in Entertainment Weekly or TV Guide bemoaning Sofia Vergara’s wardrobe on Modern Family. But people always get bent out of shape about poor Lara Croft. When Crystal Dynamics thankfully took over the franchise from Core Design in 2003, they spent three years crafting Tomb Raider Legend, and one of their bullet points while redesigning her character was to tone down her most mammalian organs, that which had been partially responsible for her success and infamy as a character. This was a priority—the thinking was that by making Lara more realistic, she’d be more relatable, and more people would buy the game. Legend was a success, but probably not because of Lara’s breast reduction—more likely because the game was actually good. 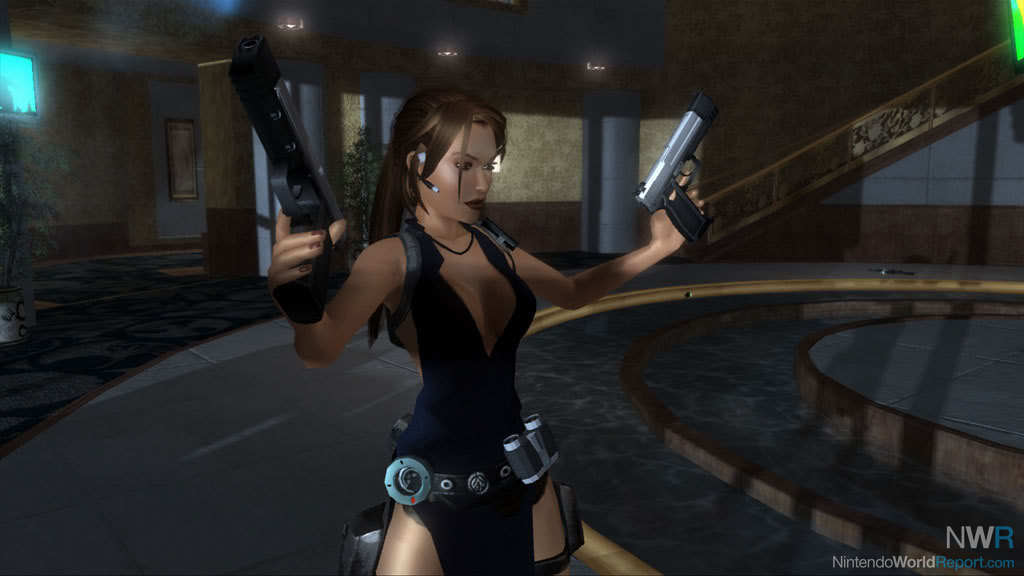 Crystal Dynamics claims they shored up Lara's assets for TR: Legend, then proceeded to show as much of those assets as possible. Compromise noted.

The follow-up to Legend, Tomb Raider Anniversary, restored Lara’s endowments and even added some subtle visual jiggle, something we hadn’t seen yet in a Tomb Raider game. However, unlike the previous game, Lara wore no split evening gowns or cleavage-baring tops. Instead, her wardrobe choices seem purposefully conservative. You might say these factors cancel each other out, but the aftermath of this decision is unclear—I don’t remember anybody bitching and whining that Lara was once again able to comfortably fill her bra, but Crystal Dynamics must have been unhappy with the direction Lara was going (again) because they covered her up entirely in 2009’s Tomb Raider Underworld. In fact, I might suggest that Lara’s costumes in that game actually downplay her chest. If Crystal Dynamics was going for realism, I applaud them while also pointing out that there’s nothing realistic about a 30-something Lara Croft plowing her motorcycle through ancient subterranean ruins while battling giant albino spiders and undead warriors. Tomb Raider has never been realistic—it’s a cartoon. 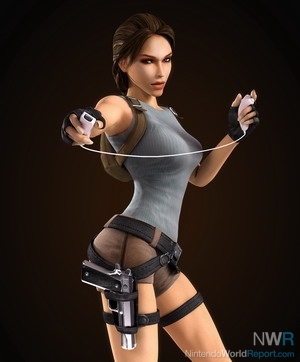 There was a Wii version, as you'll recall. This is Lara's normal outfit in the game, and also the one that shows off the subtle jiggle effects. Again, kind of a contradiction.

More confusing still, Crystal Dynamics actually reneged on their “more realistic” Lara with Xbox 360 DLC. The downloadable level “Beneath the Ashes” includes not only a fairly simplistic new area, but also several new costumes for Lady Croft, including three or four revealing bikinis in different colors. One might say this was the developer apologizing for the main game’s complete lack of cleavage, or caving to the Croft purists, while simultaneously revealing an inherent contradiction in their design philosophy: to titillate or not to titillate? That is the question, and it’s one Crystal Dynamics can’t seem to decide on. 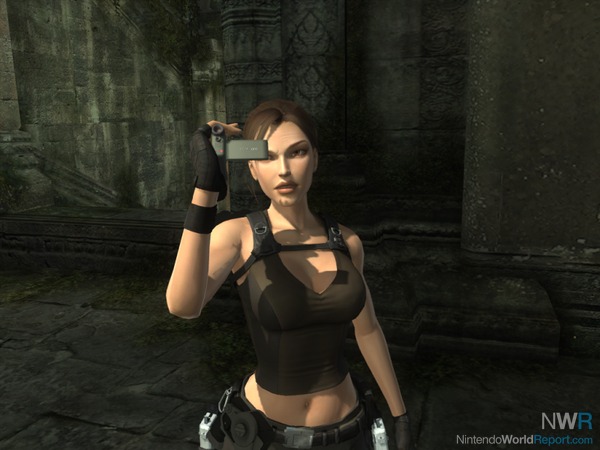 You'd think Lara's V-neck top would show some cleavage, but it really doesn't. This is puzzling.

It would appear Crystal Dynamics is once more rebooting Lara’s adventures. Fresh out of her Alma Mater, Lara will be shipwrecked on an island, suffering grievous injuries in the process, and will have to find food, supplies, and help during her stay. Her character model has changed considerably, almost to the point of not really looking like Lara Croft anymore. The ponytail is gone. The sharp eyes and calm demeanor have been replaced by a disposition much more panicky. She’s wearing cargo pants. Her breasts really are significantly smaller, more “realistic,” you might say. And maybe this is fine for what they’re trying to accomplish—gritty realism, island survival, and lots of bandage application. But you’re taking away everything that’s made Lara, well, Lara for the last fifteen years. 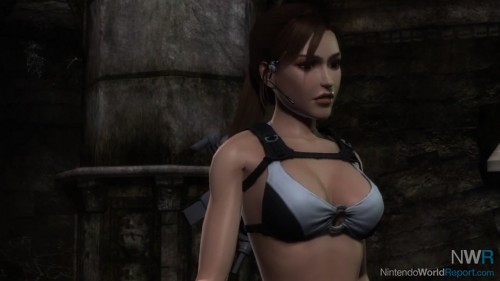 I love it, sure, but it muddies Crystal Dynamics' intent with the character, doesn't it?

Lara Croft has a ponytail. She’s cool under pressure and happy to leap around stone-age citadels. She wears ass-hugging shorts and she has a big rack. It’s not Mai Shiranui big, it’s just big. And you know what? That’s okay, because there are plenty of real-life women with big breasts. I married one. The internet is filled with them. They exist. Western game developers need to stop apologizing for giving their heroines attractive assets. Should male gamers start ballyhooing over Nathan Drake’s chiseled good looks, or Kratos’ sculpted abs? Physical features are part of what make a character recognizable and iconic. Lara has her ponytail, short shorts, and bosomy bosom. Crystal Dynamics needs to get over that and recognize the sad fact that their new Tomb Raider game could be a completely new IP and nobody would know the difference. Once you take away everything you helped Lara become over the last five years, that character ceases to be Lara Croft.

Notice that in the Batman reboot, Bruce didn't start wearing anything other than the batsuit.

Well said Zach, glad I am not the only one who feels this way. If someone want a female character with small breasts, their are other games that do that.

Here's the thing. When Tomb Raider originally came out, the obvious graphical limitations required character models to be more cartoony and embellished so as to develop character traits (thus, big sunglasses, big lips, big ass, bodacious rack). But with the increase in visual fidelity... it looks awkward at best, and embarrassing at worst.

I don't think there are any little girls out there looking to Lara Croft to be their role model, but I certainly wouldn't have any issue with making her chesticles a little lessticles.

Ultimately, though, I don't really care either way. Uncharted's a better series, so I'll just play that.

Once I saw her severely reduced cup size in the trailer I was quite puzzled to say the least. However, once I heard it was a prequel to the entire franchise I relaxed because it indeed made sense.


Now, if this size continues into later games, then we may have a problem...

I feel like you almost make good points but for the wrong reasons. Why does it matter what Lara looks like if the games are good? If you want to ogle big breasts, there's a whole internet out there for you.

The real point is that Crystal Dynamics keeps upping and downing her cup size, simultaneously making Lara chesty and apologizing for it. My feeling is that Lara's always had big breasts, it's a part of her character, deal with it, but they could also make her more modestly-sized, and I wouldn't have a problem with it, but THEY NEED TO STICK WITH ONE OR THE OTHER.

It's also a question of character design. There's a reason people freaked out about Wonder Woman's new costume even though it was more practical and less skin-showy. It just wasn't her for the last 70 years.* That's how I feel about Lara.

*DC may be a bad example. They seem to be going through some kind of mid-life crisis right now.

It wasn't her ingame model which dictated her appearance, it was the assortment of pre-rendered promo images and magazine ads which defined her. Can't blame the fidelity of the game at the time, she was a consioucly engineered piece of property.


Great article though, "The Indefensable Point" is a great approach and did an excellent job at pointing out that bust size /= modesty. What the article could have approached was how they tried to grab free press from proclaiming that the character was now more "sensitive" to real women aka less "Barbie Doll," only to resume prancing her around in daisy-dukes and what may as well be a J-Lo low neck top with jiggle physics. Physics that I can garantee were the first "milestone" in their development agenda.


I don't have a problem with any component of the character really, if it all existed in a vacuum. I have a problem with the hypocritical "suits" cleverly double-dipping their attention with hollow sentiments of "sensitivity towards women," which I recall from nearly every pre-release interview for each of the games released since the Ps2 hit.


Its almost demonic really - "Shes evolved into a genuine role model for girls now" "*Ahem* Now watch dem BOUNCE LIKE SHE HAD THE HICCUPS BRAH!"

I feel like you almost make good points but for the wrong reasons. Why does it matter what Lara looks like if the games are good? If you want to ogle big breasts, there's a whole internet out there for you.

All I could think about while I was reading this was this comic that was posted on Reddit a few weeks ago.

As much as I appreciate a good pair, if the face isn't much to look at there is no point to the exercise. While Lara is somewhat idealistic, it is attainable, if not simply rare in the real world.

Men have to deal with the opposite where you have male characters so muscular, so monstrous, it's no longer human eg, Gears of War. I find this a much bigger problem than some abundant fun bags.

At least Lara is human.