Mario & Friends are bigger than you thought. 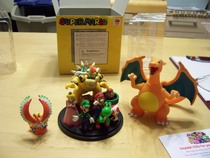 I finally received my Club Nintendo Elite reward in the mail the other day. It came in a surprisingly large yellow "?" box, which made me wonder if the figure inside was similarly sized. As you may recall, early reports suggested that the Mario & Co. figurine was positively small. Well, I'm happy to report that the figure certainly isn't microscopic by any means. Wait, why am I just sitting here describing it? Click through already, and look at the pretty pictures! 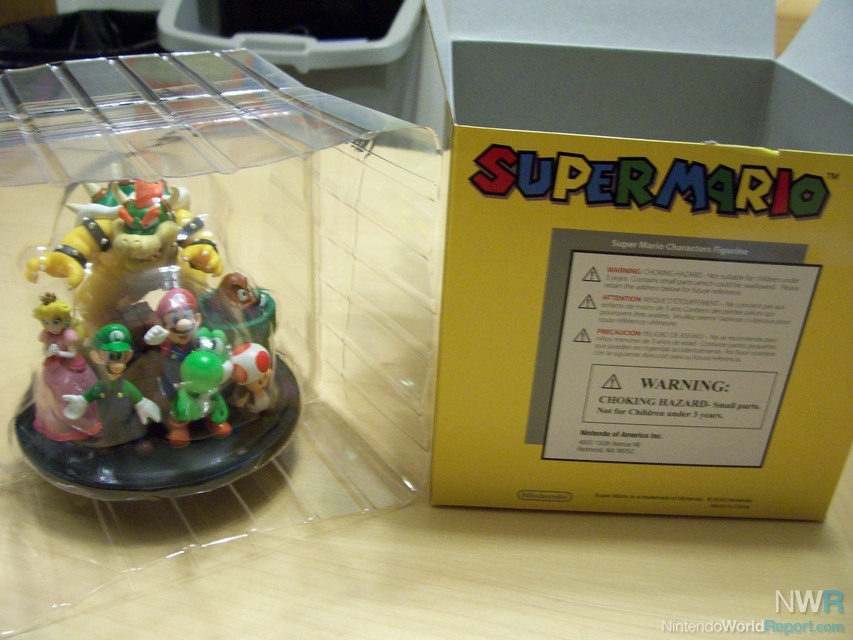 Now opened, the box proceeded to unleash all of mankind's fears and worries into the world. Damn you, Zeus!

Well, as you can see, the box's nefarious innards are mostly plastic shell. This shell is held together by flimsy clear tape, which is easily severed with a knife. You can then easily pry apart the plastic shell and get at the chocolate center within (note: the figure is not actually made of chocolate--as far as I'm aware). 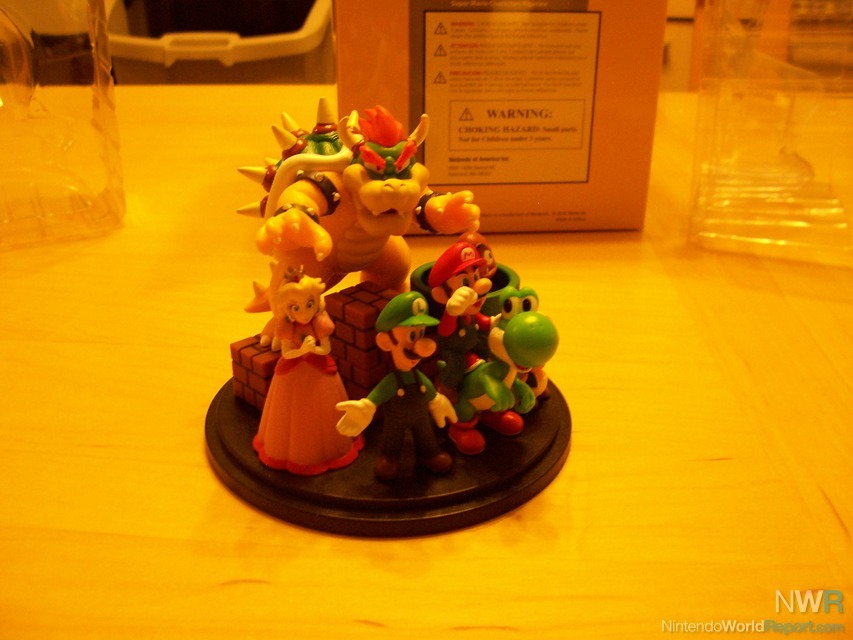 The table, for some reason, developed jaundice between this photo and the last one. Hoping it wouldn't spread to the cabinets, I had to put the table down.

Here it is! From left to right, front to back, we have Peach, Luigi, Mario riding Yoshi, a Goomba coming out of a pipe, and Bowser. I really like the poses--Bowser especially looks dynamic and menacing. He's apparently about to tear off Peach's head. Each figurine is impressively detailed, right down to the scutes on Bowser's back surrounding the spikes. 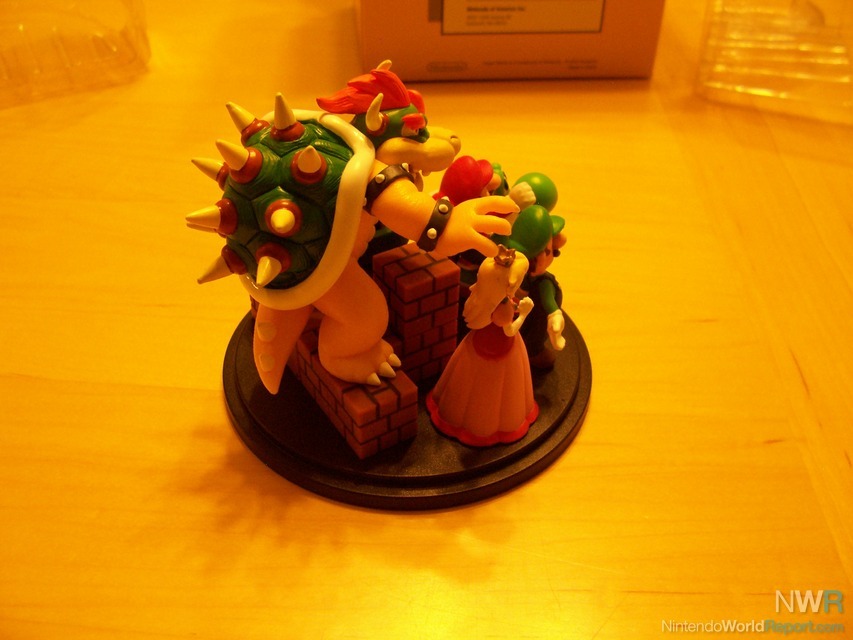 I wonder if, when nobody's around and the toys come to life, can all of these figurines get off the base, or are they hopelessly stuck to the base? Because that would suck.

The figure has a greasy feel, and everything feels a bit like very fresh clay, but it clearly smells like a petroleum-based modeling substance (plastic). Notice the Goomba here, peeking out of the pipe. I think it's my favorite part of the figure. Goombas really don't get enough love. 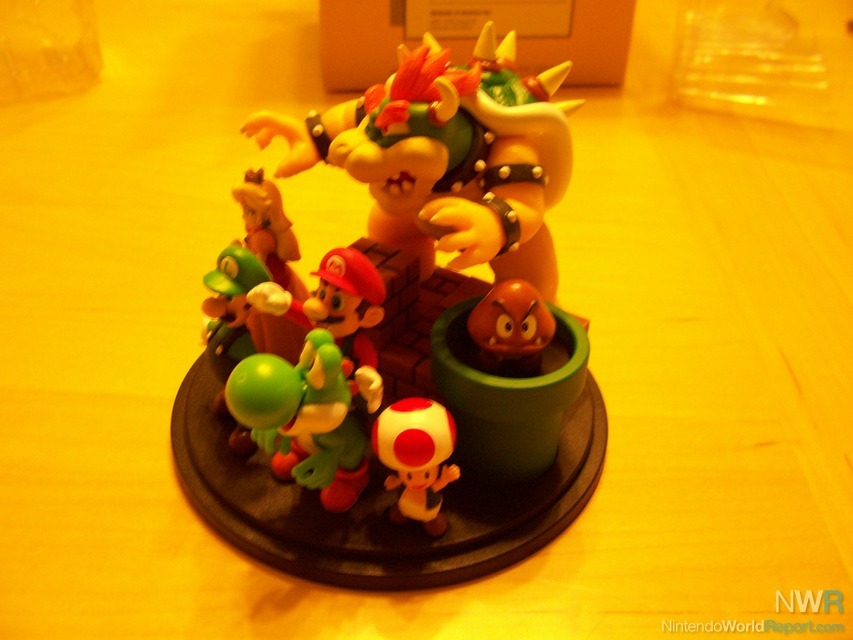 Yoshi's nose is about to fall off.

Because paleontologists love scale, and I don't have scale bars in my house, I'm going to provide you actual scale in the next picture so you can get an idea of how big, exactly, this figure is. Short answer: it easily fits atop a CD jewel case. Long answer: see below. 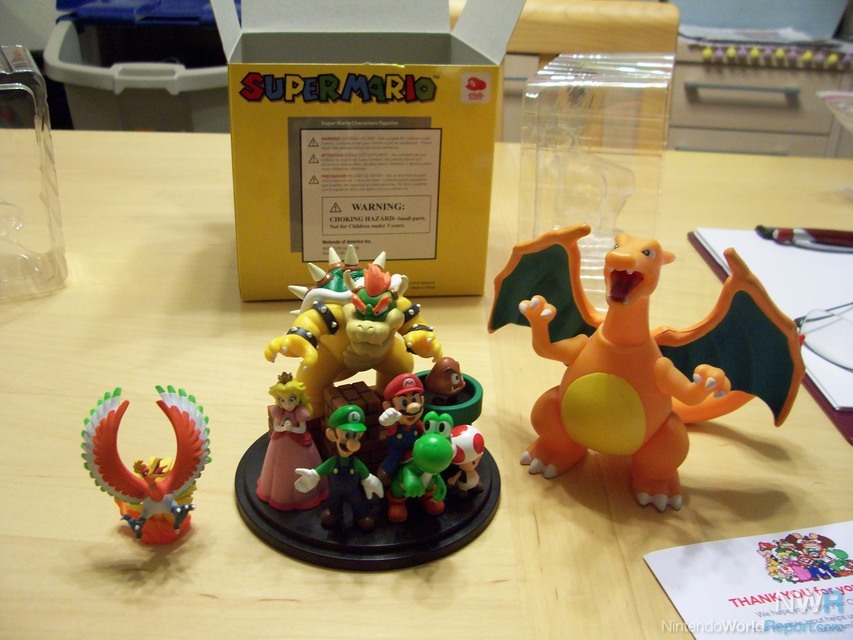 See the box in back? You can put your weed in there.

So it's bigger than the Pokemon HeartGold Ho-Oh figurine, but smaller than the Charizard toy I bought at Fred Meyer. I'm glad I received this little reward from Club Nintendo (and free no less!) (not really), and I just wish this sort of quirky thing were available everyday to trade Coins for. Ah, perhaps someday. A girl can dream!

I generally don't care much about tchotchke like this, but it does look nice in person and thankfully doesn't take up much space on a shelf. The giant ? block is almost cooler than the figurine itself, and I was a bit sad that the lid tore during opening because I didn't see the clear tape holding it shut.

I am farely new to Club Nintendo, but I recently uploaded a bunch of points and made it to Gold status is about a day. I am about fifty points shy of platnium status, but I would love to have this damn figurine. It looks so bad ass! Zach, I bet this thing is going into your collection, right?

Nintendo should offer this at retail.

Thanks for the smell analysis Zach, the pictures just don't do it justice.

Me too, I forgot to do some last minute registration and ended up only getting Gold status. I got my 2011 calendar on Saturday/

Zach, I bet this thing is going into your collection, right?

"The table, for some reason, developed jaundice between this photo and the last one. Hoping it wouldn't spread to the cabinets, I had to put the table down."